How It Works: The Best View From Space Yet

See an interactive animation inside 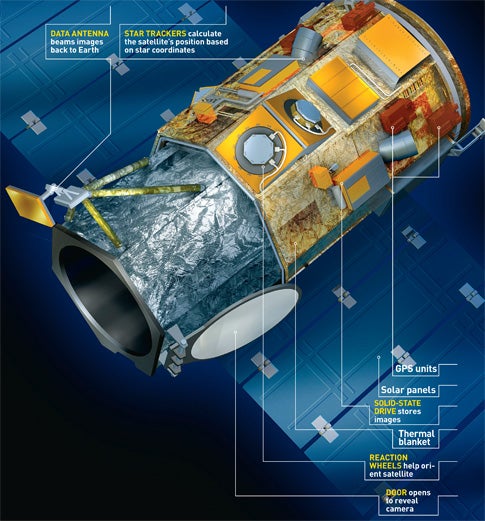 When the GeoEye-1 surveillance satellite comes online this spring, its advanced optics will produce more-detailed images than any commercial satellite, capturing objects as small as home plate on a baseball diamond and filling in the fuzzy spots on Google Earth.

How to Capture Images From 425 Miles Up

1. Get Into Orbit
The 4,400-pound GeoEye-1 will travel 425 miles into space on the back of a Delta 2 rocket from Vandenberg Air Force Base near Lompoc, California. Over the satellite’s planned seven-year life, it will be able to adjust its orbital altitude by 60 miles, which it will need to do to maintain a consistent view of Earth: Atmospheric drag and pressure from solar winds will gradually push the satellite down.

2. Receive Commands
GeoEye operators send instructions on what and when to photograph from one of four ground stations in Alaska, Virginia, Norway and Antarctica. Even though the satellite will be used commercially, all transmissions are encrypted under the licensing terms of the National Oceanic and Atmospheric Administration.

3. Get in Position
GeoEye-1 is the first non-military satellite to use military-grade GPS units, highly accurate devices that tell the satellite exactly where it is in the sky. Two star trackers calibrate the camera’s location and angle based on known star coordinates. Combined, these systems can pinpoint an object’s position on the ground within nine feet, 1.5 times as accurate as previous satellites.

4. Align the Camera
Once the satellite is over the target—a New York City block or a miles-wide patch of rainforest in Brazil—reaction wheels spin to orient it. As it nears the proper position, the wheels spin in reverse to halt the satellite’s rotation and train the camera on the target.

5. Check the Lighting
Ground control calculates the sun’s and the satellite’s angle to Earth to determine exposure time. Because the satellite’s 16-inch resolution depends critically on the precise shape and spacing of the optics, they are sealed in a tube and kept at around 72°F to prevent them from warping in the widely varying temperatures of space. The tube’s door opens only when the camera is ready to take an image.

6. Take the Shot
The camera scans the target in 20,000 37,500-by-1-pixel strips every two seconds, allowing it to easily create a 90-billion-pixel image (about 6,000 square miles) in two minutes. A data-processing unit compresses the image files and stores them on a one-terabyte solid-state drive.

7. Beam it Down
The sat can capture an area the size of Texas every day. It downloads encrypted images to the ground stations 40 times a day over radio waves. Once GeoEye combines the strips into full images, they are sent to buyers including Google Earth and countries with limited or no surveillance satellites, as well as the government’s National Geospatial-
Intelligence Agency, which is GeoEye’s primary customer.

See an interactive animation of GeoEye-1 in action here

You can barely make out the tennis court in a standard, one-meter-resolution satellite image of Denver [left], but you can clearly see the court’s shape with the 16-inch resolution of GeoEye-1 [right].

Return to article: How It Works: The Best View From Space Yet