How It Works: The Pocket-Size HD Camcorder

This HD camcorder packs 12 lenses in a barrel the size of your thumb for vivid, jitter-free video in a pocket-friendly package 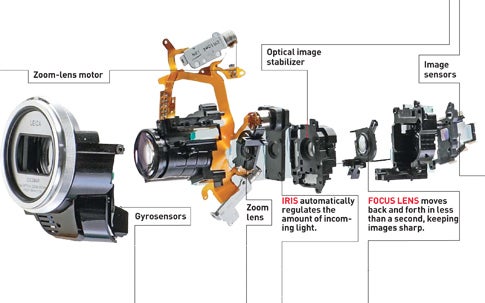 As cameras continue to shrink in size and weight, an often overlooked side effect is their lack of image stability. Naturally, the heavier the camera, the less your shaky hands move its lens. Via optical image stabilization, the Panasonic HDC-SD5 keeps footage rock solid while maintaining a pocket-size form factor.

How to Create Color-Rich, Steady-Handed Video

1. Collect the Light
Light enters the front of the camcorder and passes through a series of aspherical lenses and so-called low-dispersion lenses, which are made of ultra-pure glass. Together, these bend the light to magnify the images but don’t spread out colors the way a prism or cheap lens would. (That can lead to green or red smears in the footage.) A motor-driven zoom lens slides back and forth to change the view from slightly wider than the naked eye’s to an 8.5-fold magnification. With a large aperture (f/1.8), the camera captures enough light to record clear action in a candlelit room.

2. Stabilize It
Light then passes to an optical image stabilizer that smoothes out jitters from shaky handheld shooting. Gyrosensors below the lens barrel measure the camcorder’s minute movements up and down and left and right. A processor analyzes the data and sends signals to the stabilizer, where a lens floats in a magnetic field. Adjusting the electromagnets nudges the lens in the opposite direction of the camera jitter, as frequently as 4,000 times per second, to compensate for the movement and deliver a steady beam of light to the image sensors.

3. Split It
Before the image can be recorded, the light beam has to be divided into the red, green and blue components that your TV will later use to reassemble the video. Most camcorders split the light with alternating color filters over the individual pixels on a single imaging chip. But those filters absorb much of the light and dull the colors. Panasonic instead uses a series of prisms to separate the beam into three color streams. Each stream strikes a separate image sensor that measures its intensity on 560,000 pixels to produce more-vivid video than single-sensor cameras can.

The main circuit board holds the image processor, which controls the autofocus and iris, cleans up the raw data from the sensors, and compresses the video up to 60-fold to fit on an SD memory card. A separate processor controls the image-stabilizer lenses.

The battery holds lithium-ion cells that can power about an hour of shooting.

The LCD receives live video from the processor in real time.

Jacks provide video and audio outputs and a computer connection.

An SD memory card records up to five hours of high-def video on a 32-gigabyte card.