As much as we love our silicon semiconductors, quantum computers are very much a technology of the future. Instead of... 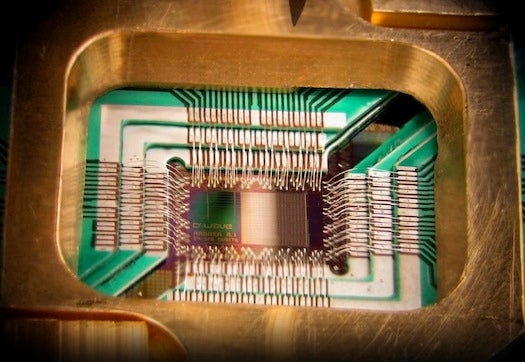 As much as we love our silicon semiconductors, quantum computers are very much a technology of the future. Instead of the usual string of 1s and 0s, they’ll be able to send both types of information at the same time, dwarfing their traditional counterparts. But one major problem is that they can only move through one optical fibre. To push more information through, they need a router, and Chinese physicists have unveiled the first one.

In a quantum computer, photons ferry information to other sources. It’s possible to send the photons directly through one fibre, but routing comes in when another fibre is needed. Like the router you probably own, a control signal reads the data then sends it to its destination. But dealing with unruly quantum particles is a little more complicated; when a signal is read it’s also destroyed. So even though the data can be transferred with traditional methods, that doesn’t offer the kind of data-transferring power quantum computing offers.

This new quantum router proves it’s possible to truly guide a quantum signal. The information used is encoded in two different types of polarized photons (like 1s and 0s). Scientists then create a single photon that acts as both (the combined 1s and 0s). That photon is then broken down into two photons that share the combined state. The router picks up one to determine the route, then the other photon is used to transfer the information. A simple series of half mirrors guides the photons along the correct route.

Does this mean we’re now well on our way to a globally connected, super-fast stream of information? No. The scientists say it’s just a proof of concept–we know it’s at least theoretically possible to send quantum information through a router, but it’s still a limited way of doing it. In other words, when this sort of technology is usable (and it will be), it won’t look like this.