In an excerpt from our new Tech Buyer's Guide, learn everything you need to know to make a smart purchase on one of the most popular gadgets of the year 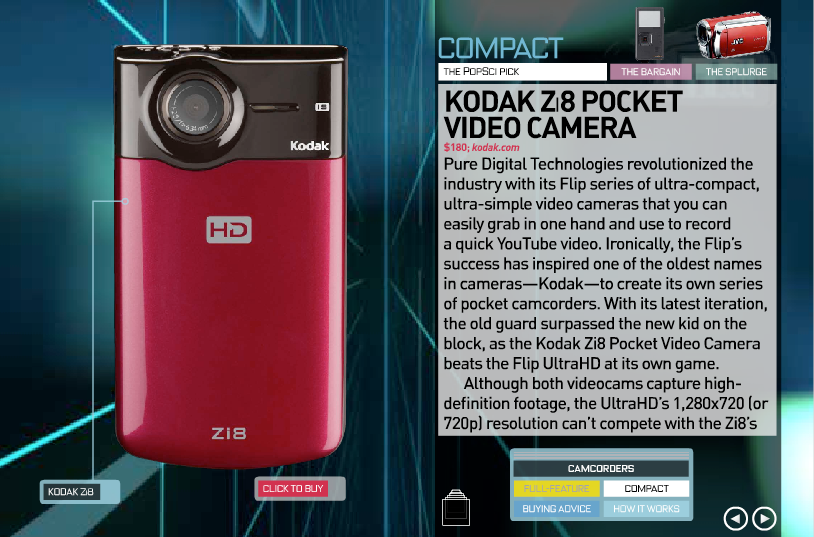 Each day this week leading up to Black Friday, we’ll excerpt a chunk of our new Tech Buyer’s Guide here on the site to arm you with the skills and the picks to get the most from your weekend shopping madness. Here are our picks for pocket camcorders (hint: no Flip!) and our buying advice for camcorders in general. Check out the guide for our picks in full-feature camcorders, as well as 15 other product categories. 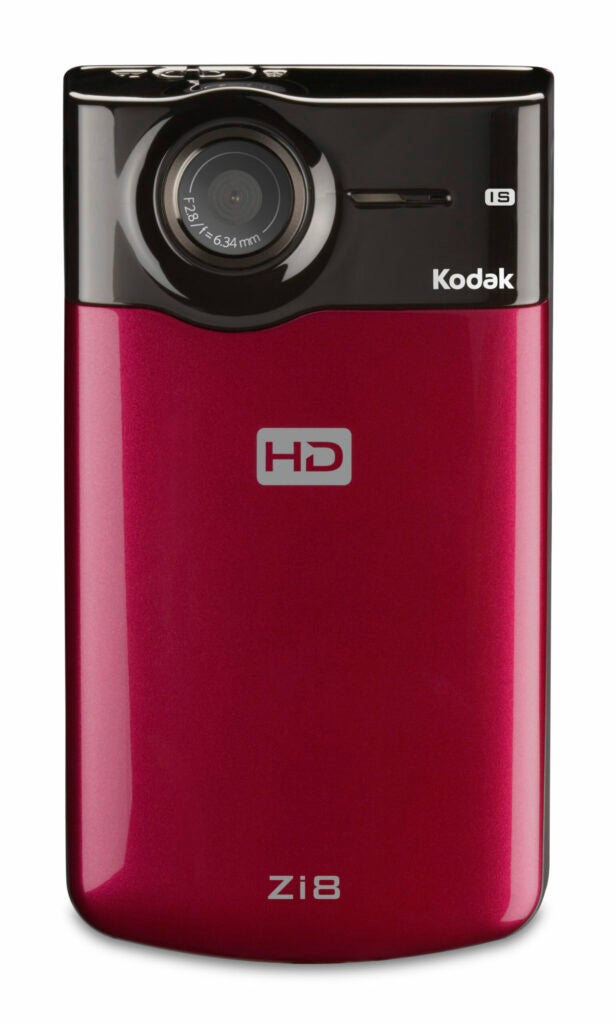 Pure Digital Technologies revolutionized the industry with its Flip series of ultra-compact, ultra-simple video cameras that you can easily grab in one hand and use to record a quick YouTube video. Ironically, the Flip’s success has inspired one of the oldest names in cameras—Kodak—to create its own series of pocket camcorders. With its latest iteration, the old guard surpassed the new kid on the block, as the Kodak Zi8 Pocket Video Camera beats the Flip UltraHD at its own game.

Although both videocams capture high-definition footage, the UltraHD’s 1,280×720 (or 720p) resolution can’t compete with the Zi8’s 1,920×1,080 (or 1080p) “full HD” experience. That’s due to the Zi8’s 0.4-inch sensor, which is larger than that of any other pocket cam. It comes with electronic image stabilization—another first for a camera this size. The Zi8 also sports a 2.5-inch LCD, which tops the Flip’s 2-inch screen and, unlike the UltraHD, includes an HDMI cable. One drawback: The Kodak doesn’t include a memory card and offers a virtually useless 128 megabytes of built-in memory, so you’ll need to purchase your own SD/SDHC memory card for storage.

All Flip-style camcorders suffer from the lack of an optical zoom, and image quality isn’t going to compete with footage from full-featured models. But if you want to shoot simple HD footage with a device that can easily fit in a purse or pocket, the Zi8 is the videocam to beat. 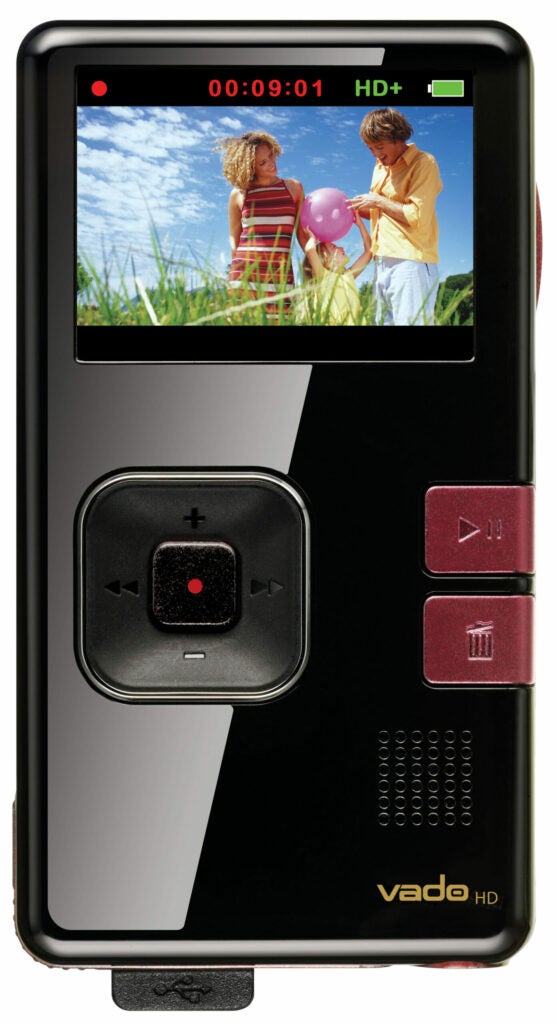 If you want to save about $50 but still record high-def video in a pocketable form factor, consider Creative’s first-generation Vado HD Pocket Video Cam. It delivers decent-quality 720p footage, has a bright two-inch display, comes with a removable battery and an HDMI cable, and even includes eight gigabytes of built-in storage to hold up to two hours of HD video. It doesn’t have a memory-card slot and you can’t take still images with this Vado HD, but for well under $150, it’s a perfect first YouTube shooter.

The point of these camcorders is that you’re not looking to splurge, but if you’re willing to spend an extra $100 or so and you don’t need HD resolution, you can bypass the limitations of Flip-style cameras and get a budget model that’s still compact but includes an optical zoom. It’s not the camcorder for everyone, but the JVC Everio GZ-MS120 features a 35x optical zoom, in sharp contrast to point-and-shoot videocams that have no optical zoom at all. It offers a bigger 2.7-inch LCD that flips out for more-flexible shooting options, and its dual memory-card slots are a novel way to maximize your storage. You don’t get any built-in memory, and it doesn’t include any video outputs (you need to connect it to a computer through its USB port to download your footage), but if you crave a real zoom lens and manual controls without busting your budget, the Everio delivers. 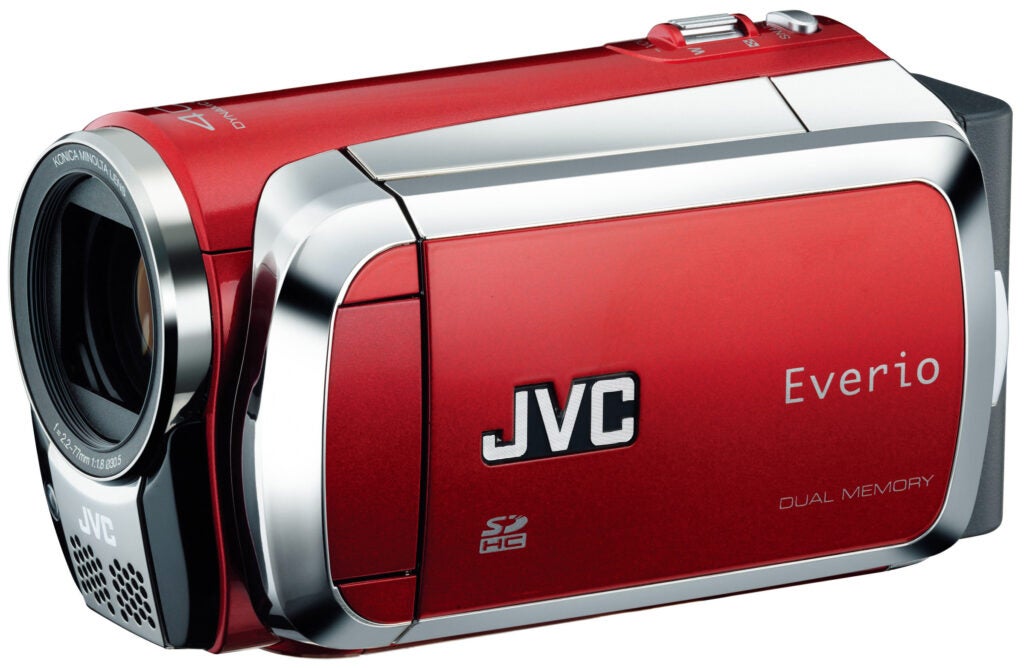 • Resolution: Although standard-definition video cameras are still available at the low end of the market, it’s time to make the switch to HD for your home movies. Better still, most HD camcorders record 1080p (or “full”) high-definition footage, which means those moments you capture will look especially good on HDTVs now and in the future. The one drawback to HD video is that it will eat up more of your storage, leading to shorter recording times, depending on the mode you select. For instance, the Canon Vixia HF20 can record more than 12 hours of footage at its lowest-quality setting, but that plummets to 2 hours and 55 minutes at its best 1080p setting. In general, you’ll need twice as much storage space to record the same amount of footage in HD as you would in standard definition.

• Sensor Size: The bigger the sensor, the more detail it can capture, resulting in a better-quality image. Higher-quality camcorders may have three smaller sensors (one for red, green and blue light) that can offer superior color reproduction.

• Lens: As with most digital cameras, the amount a camcorder’s lens can zoom in on faraway action is measured in x. Unless you’re buying a point-and-shoot, Flip-style model, video cameras will usually come with at least a 10x optical zoom. Look for a longer zoom if you shoot a lot of footage from a distance (20x should be sufficient). Just be aware that it’s harder to keep the lens steady the farther it’s extended.

• Display: Almost all new camcorders have at least a 2-inch LCD on which you can frame your shots and view menu items; most have 2.5-inch to 2.7-inch displays, with a few offering 3- or 3.2-inch screens. Generally speaking, the bigger the better. A few video cameras still offer a viewfinder with which to frame shots, but they’re a dying breed.

• Storage Media: What type of media it uses affects how much you can record and how easy it is to work with your footage. If you favor the lightest camcorder, you should go the flash-memory route. Most videocams come with some embedded flash memory, but there are models that have as much as 64 gigabytes built in, and many have a slot for either SD/SDHC or MemoryStick flash-memory cards. In addition to reducing the size of camcorders, the use of flash memory—which has no moving parts—makes for a more shockproof device.

Only a handful of new models use MiniDV tape, which can also record high-definition footage in the HDV format. These require you to attach your camera to a computer to edit the footage, although most video software is compatible with the formats. Camcorders with hard drives offer the most storage but can be heavier and are more susceptible to damage if dropped. Finally, models with built-in DVD drives are still available; the discs can go straight to your home DVD player, but the smaller discs don’t offer much recording time.

• Manual Controls: They may not be something you use every day, but they can be the difference between getting a shot and getting a perfect shot. You can manually focus if you’re not satisfied with the automated focusing, and you can change the white balance (how the camcorder adjusts to white light) for different lighting conditions. Budding Spielbergs will want the option to manually adjust shutter speeds (which determines how long light is allowed to hit the sensor) and aperture (which controls the amount of light that reaches the sensor), although these features are generally only on camcorders costing $1,000 or more.

• Digital Zoom: It’s usually a higher number than optical zoom, so manufacturers like to tout it. Feel free to ignore it, as digital zoom doesn’t really involve zooming at all. It merely relies on the camera cropping an image and then blowing up the remainder so it appears closer, which winds up degrading image quality.

• Touchscreen Interfaces for LCDs seem like a better idea than they are. The screens aren’t typically large enough to make these interfaces any more handy than using physical buttons to navigate through the menu. Instead ask (or test) how well a display works in direct sunlight, a trickier but more useful screen quality.