How It Works: Tomorrow’s Hybrid 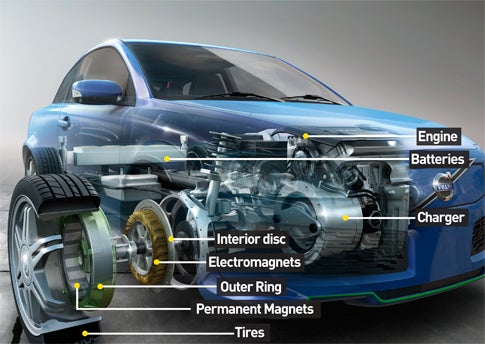 The ReCharge, Volvo’s concept plug-in hybrid, could squeeze 160 miles from a gallon of gas by tossing out the power-wasting transmission. It packs a small electric motor inside each wheel, so that no power is lost in the drivetrain. Here’s a look at the next generation of fuel-efficiency

How Wheel Motors Drive the Car

Putting electric motors directly inside the wheels eliminates the transmission, which typically wastes 10 to 20 percent of the engine’s energy. An interior disc, mounted to the wheel bearings, contains a series of independently controlled electromagnets, which emit a magnetic field in response to an electrical current. Around that, an outer ring contains permanent magnets. Step on the accelerator, and a computer in the interior ring begins to rapidly switch the polarity of the electromagnets, repelling or attracting the permanent magnets. The faster the polarity changes, the faster the motor spins the wheels.

The challenge is controlling four independent motors—if one spins even slightly faster, the car could veer violently. The ReCharge team’s next big hurdle is refining the software that maintains precise control. As for performance, the car will have permanent all-wheel drive with no gearbox standing between your foot and the motors—in other words, it should go like a rocket.

Batteries power all four motors and the car’s electronics. Unlike most plug-in hybrids, the ReCharge uses a lithium-polymer (rather than lithium-ion) battery. This is not only safer—it uses sheets of plastic instead of a volatile electrolyte solution—but it also powers the car for 60 miles before the engine kicks in to recharge it. Small lithium-polymer batteries have started to show up in gadgets such as the iPhone, but Volvo gets its larger, experimental versions from an undisclosed manufacturer.

The engine charges the battery when the car isn’t plugged in. The concept design calls for either a 1.6-liter flex-fuel or turbodiesel engine, but since the engine doesn’t have to actually spin a drive shaft, a fuel cell or a second battery could do the job just as well. It would kick in to recharge the battery only after the battery was at 30 percent capacity, so the ReCharge could travel 160 miles on a single gallon of gas.

A charger feeds power to the battery when the car is plugged in at home. Eventually, the ReCharge will be equipped with an intelligent version that can automatically sense strain in your area’s electrical grid and either cut back its power consumption or feed electricity from its battery back into the system.

Tires must be as thin as possible since the motor makes each wheel bigger.The ReCharge uses specially designed Michelin tires with a soft, resilient surface that also reduces rolling resistance.