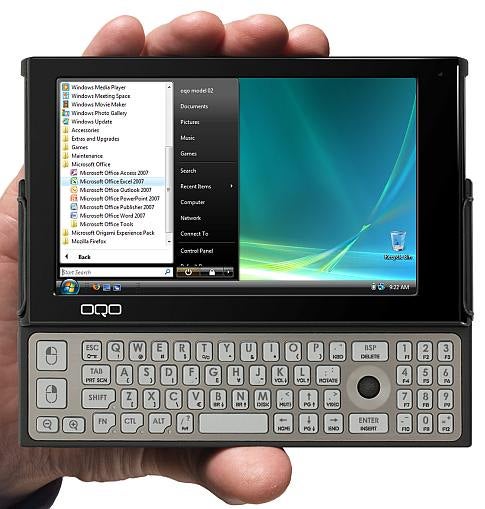 OQO has been pushing the bounds of what you can fit into your palm for a few years. Long before netbooks were even a twinkle in Intel’s eye, the company was making tiny, full-service computers. But with the explosion of said netbooks, plus ever-smarter smartphones, is there still a place for this Lilliputian, high-power, high-priced computer? Hard to say, but the company isn’t just sitting back to see what happens.

OQO’s latest model, the 2+, impresses with many features. Chief among them: a gorgeous five-inch OLED display–which provides a million-to-one contrast ratio, says OQO, and up to 110 percent of the NTSC color gamut (even most full-sized notebooks screens are well below 100 percent of NTSC colors). And while OLED is not known for longevity, OQO says they expect the screen to lose only 20 percent of its brightness after 8,000 hours. (That’s a few years of regular use.)

The company claims this screen is both the first OLED on a PC and the first OLED with a touchscreen. Unfortunately, it’s the humdrum resistive version instead of the ultra-sensitive capacitive screen that the iPhone made famous. But OQO says that the additional circuitry of this “five-wire” type makes it more sensitive than your standard resistive screen. And it was quite responsive when I tried it out.

Like every tiny PC, the 2+ runs an Intel Atom processor, in this case the peppiest 1.86-gigahertz flavor. That plus the Intel Poulsbo chipset and graphics allow it to run the resource-hogging Windows Vista and play HD video clips up to 1080p. That’s a bit of overkill on the 800-by-480-pixel screen. But the videos did look stunning, and stutter-free.

The low-power screen and chips boost battery life by 20 percent over the previous model 02, says OQO, offering about three-and-a-half hours of runtime per charge.

That battery will probably drain a lot faster if you take advantage of the wireless options. In addition to the standard Wi-Fi and Bluetooth, OQO is offering the 2+ with a Qualcomm “Gobi” chip and five-band antenna that lets you subscribe to any high-speed wireless service — including AT&T, Sprint and Verizon.