Fruit Punched: What Is The Point Of Flavored Mouthguards?

A boxer weighs in. 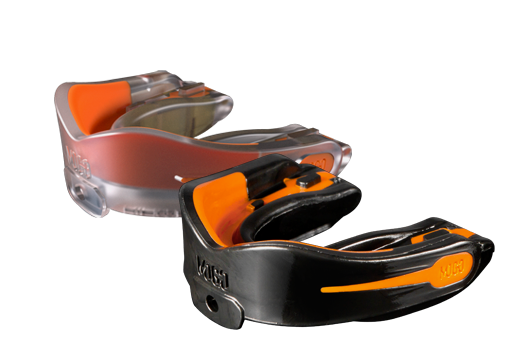 A mouthguard is the single most important piece of safety equipment in any fighting sport. Sure, the gloves are iconic, but they only protect the tiny bones of the hand. The headgear sure looks safe, but its actual value in protecting against brain damage has been called into question (and pro fighters don’t get to wear one anyhow). It is the humble mouthguard that ultimately keeps a fighter’s teeth intact, keeps him from biting off his tongue, wards off broken mandibles, and helps cushion the brain from blows to the jaw. In the heat of battle, under attack from a determined foe, a mouthguard may be a fighter’s only real line of defense.

Sane people, therefore, are quite happy to wear mouthguards. So why would someone need to create a dubious gimmick to entice people playing dangerous contact sports to wear a mouthguard? Well, I don’t know. But of course, someone has. Capitalism at work.

What’s New
“The challenge with current athletic mouthguards is that the experience of wearing one is just not that great,” says the first line of the brochure touting MoGo: The Flavored Mouthguard. Now, let me stop you right there, MoGo: The Flavored Mouthguard. I would argue that the experience of wearing a mouthguard is great, compared to the alternative, which is tooth fragments embedded in one’s tattered remains of a tongue. Compared to that, the average athletic mouthguard is quite attractive.

What’s Good
Let it be acknowledged: these MoGo mouthguards are perfectly good and functional mouthguards. They are of the “boil and bite” variety, meaning that you submerge them in boiling water for a minute to soften them, then bite into them to shape them to your mouth. Their cushioning is generous. When properly fitted, they work just fine.

And the flavor? Well, the Mint flavor was not so bad at all! It had only the faintest whiff of flavor, like a piece of Doublemint that had been worked over for an hour or so. And its color scheme was a decidedly non-embarrassing shade of green. The “Bubble Gum” flavor comes in a decidedly embarrassing shade of pink. Being too insecure in my manhood to try this out personally, I passed it on to my middle-aged boxing trainer, who used it while sparring for a week. He was not a fan of the flavor, but pronounced its overall performance as “not bad.” He’s also given to pronouncing direct punches to his face “not bad,” so keep that in perspective.

What’s Bad
Well, how about the Orange flavor? It was the first MoGo mouthguard that I tried, and it was not an attractive experience. MoGo’s particular artificial orange flavor bears an uneasy resemblance to the flavor of bile creeping up the back of your throat just before you vomit. Not, as you can imagine, the flavor that you want to experience while being punched in the gut. The flavor is not strong enough to make you conscious of it during the midst of a fight, but inserting the mouthguard at the beginning of each round provides a brief burst of Sickly Orange aroma. It’s a distraction.

MoGo’s artificial orange flavor bears an uneasy resemblance to the flavor of bile creeping up the back of your throat.Mouthguards should ideally be clear, or, if colorful, should boast a color scheme that makes a statement, like the colors of your country’s flag, or a “scary fang” print to intimidate your opponent. MoGo’s color scheme is simply a solid black of Crayola-like color, which is neither inspiring nor intimidating. Also, these mouthguards feature a “tether” hole in the front, so they can be attached to a helmet, should the sport require it. That’s fine for football players, but for boxing, it just creates an overhanging bucktooth-like rubber protrusion on the front that is better if snipped off.

MoGo makes a flavored mouthguard designed to be worn with braces as well. Thoughtful, but if your child already has to suffer the indignities of boxing with braces, the least you can do is not also force him to wear a Fruit Punch-flavored mouthguard. The kid has suffered enough.

The Price
At $11.99, the MoGo mouthguards are actually quite well priced. They’re several dollars cheaper than the average regular mouthguard of the same quality. They presumably knocked off a few bucks to make up for the flavor.

The Verdict
The MoGo Flavored Mouthguard may be studied in business schools for generations to come as a case study in “Meeting a Demand That Doesn’t Exist.” The only thing better than this new product is the old product that it supposedly improved upon.

Hamilton Nolan writes for Gawker and boxes poorly in his spare time.