How To: Pair High-Quality Vintage Leica Lenses With Your Micro Four Thirds Digicam 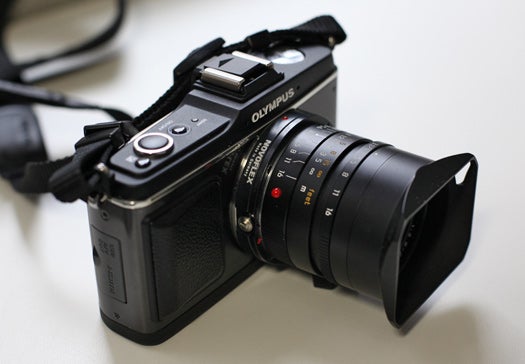 Small cameras with interchangeable lenses are a relatively fresh phenomenon in the digital world, but for those who remember something called 35mm film, the form factor is far from new. In fact, some of the world’s highest-quality optics, coveted and used by the best photographers for decades, have been designed for 35mm rangefinder systems, most notably Leica’s M-mount.

Naturally, photographers diving into digital interchangeable-lens compacts were eager to pair them with super-sharp Leica lenses, and there are several adapters on the market that make this a possibility. But is it worth it?

To find out, I assembled a new-old rig of my own using the following gear:

It’s really pretty simple–the thin adapter ring screws into the camera body on one end and the Leica lens on the other, and you’re set–the adapter has no optical component. A few other companies make Leica M-Mount adapters for Micro Four Thirds (including Panasonic/Lumix), so you have some options there. And with that, you can attach any bayonet-mount Leica lens made in the last 50 years or so to your brand new digicam.

As you can see, it’s not a cheap proposition, with the adapter alone–basically just a thin metal ring, albeit a precisely machined one–setting you back nearly a third the cost of the camera itself. But if you’ve dabbled in Leica lenses before, you’re probably used to paying a premium.

Shooting with a Leica lens on a modern digital changes things, but not always in a good way. First of all, there’s no auto exposure control–although you can pretty handily simulate aperture priority mode by setting the aperture dial on the lens to what you want, and letting the camera choose the shutter speed and/or ISO in its own aperture-priority or program mode.

You also lose auto focus, which in a way is kind of nice. The shutter fires the instant you press the button, always, and if there’s enough light for a high enough aperture, you can pre-set to a wide enough focus range to cover your potential subjects for point-and-fire shooting–a technique long employed by street photographers with rangefinders for instant, decisive-moment captures. But if you’re shooting with the aperture wide open in lower light, you’ll need to focus via the LCD, which can be cumbersome. A digital zoom focus-aid mode on the EP-2 gives you a closer look, but it takes a couple button presses to reach it (and obscures most of your composition view at the same time).

Optically, performance was pretty good. Colors were rendered with lifelike saturation, contrast was solid and depth-of-field selection at lower apertures made subjects pop. But Leica glass–or any $2,400 lens, for that matter–shouldn’t only be “pretty good.” In fact, back at my computer, I couldn’t tell a significant difference between the shots I took with Olympus’s system lens, which I’ll remind you is nearly 1/10th the cost.

Click here to launch a photo gallery with some test shots

Why is this so? The answer involves looking at how digital cameras capture light in comparison to 35mm film systems, and how that process can vary significantly from camera to camera.

Almost all lenses shine a circle of light at the recording medium inside the camera (film or sensor). But conventional photos aren’t round–they’re square or rectangular, which means some of the light is getting cropped off. Where this crop happens can vastly effect change image quality in edge sharpness and vignetting. Generally, a Leica lens is designed assuming the light-recording medium is a 35mm piece of film with an aspect ratio of 3:2 (or a similarly sized full-frame sensor, like in the company’s first full-frame digital, the M9).

Not only is the sensor used by the EP-2 and the Micro Four Thirds system 75% smaller than full-frame, it’s also composed in a 4:3 aspect ratio, which means it’s grabbing a just a tiny slice of the light being put out by the Leica lens–a slice that may not produce the best-quality final image.

“Our lenses our designed to work best with full format,” said Erhardt. [With a different sensor size], the light can hit different pixels of the sensor at a very extreme angle–once you have that, the image may be slightly out of focus, or not as bright around the edges.”

“One reason why we’ve decided not to move into Micro Four Thirds is that we have looked at the sensor size and realized that it cannot produce the image quality that we need. Therefore we decided to stick with the full format in addition to APS-C,” Enhardt continued. “It’s all about the ratios.”

In addition, software plays a huge role in forming a modern digital camera’s final output image. It is in software that things like vignetting and sharpness can be adjusted, compensating for a lens’s weak spots. In some cases, the actual image put out by a lens is greatly distorted, often to accommodate a compact body size. It’s not until the sensor data is passed through the camera’s processing software that funhouse-mirror-looking distortions are corrected. Throw an unexpected lens into the equation, and things can get messy.

If you have some treasured Leica M lenses laying around gathering dust, a $270 adapter may be well worth the price to have some fun with them on a new digital Micro Four Thirds body. With their manual controls, they lend a rangefinder-like feel to a modern digital body, and can enable some nice from-the-hip shots on the street. And the optical performance, while not the same as you would see with full-frame, was certainly still very good in the images I shot.

But if you’re looking for a fixed-focal-length, fairly fast and resonably sharp lens for a new MFT camera, save yourself two thousand dollars and go with the fixed-focal-length 17mm pancake. You can also look into one of several lenses Panasnic produced to Leica specifications for the larger Four Thirds system, which you can use with another (cheaper) adapter. These two systems use the same sensor, so performance is likely to be similar.

Some further reading from our friends at Pop Photo: 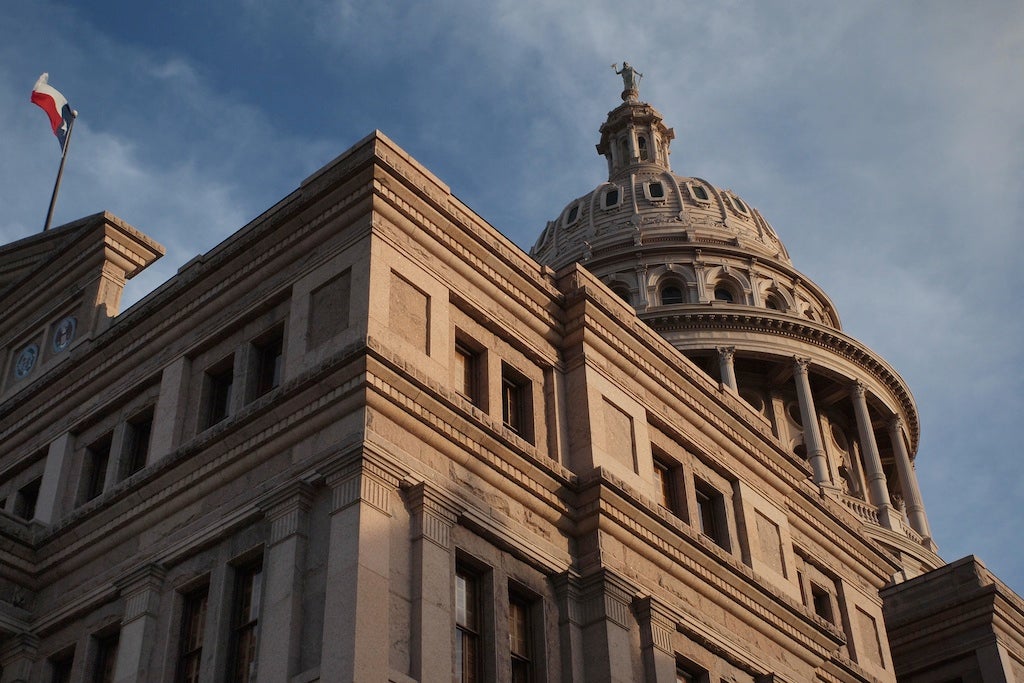 In late-afternoon light, colors, contrast and sharpness are excellent. This is the capitol building in Austin, Texas. 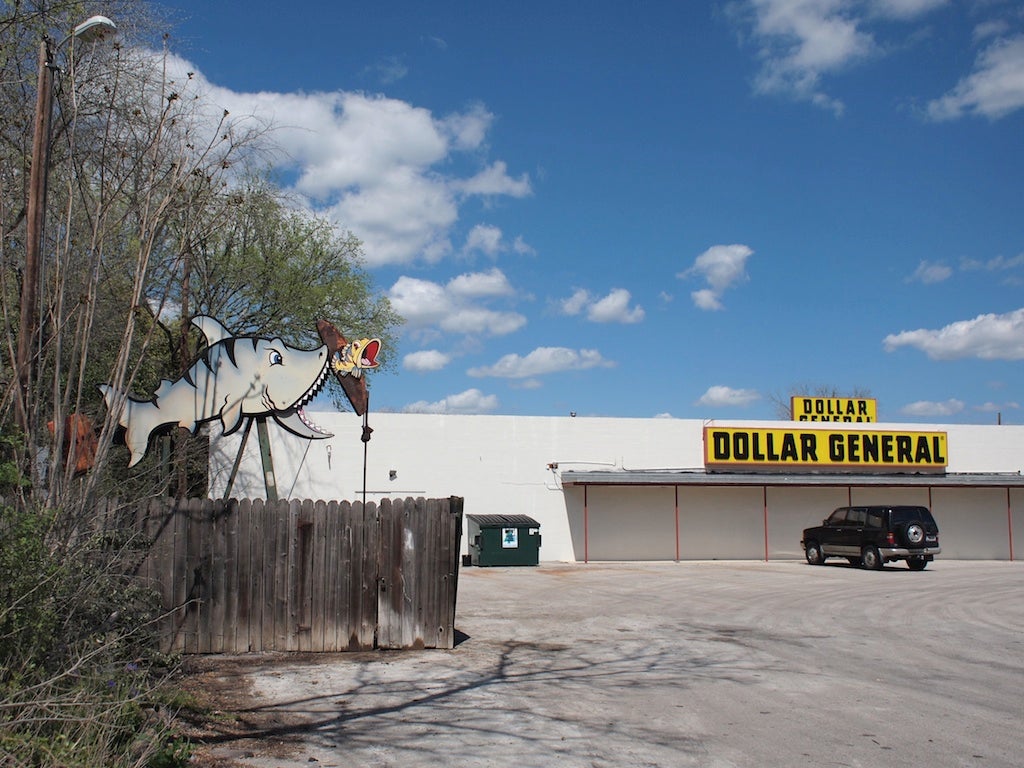 Equally nice, I think, are the colors and contrast captured by the Oly lens. This is one of many nicely decorated oil well pumps on the road between Austin and Lockhart, Texas. 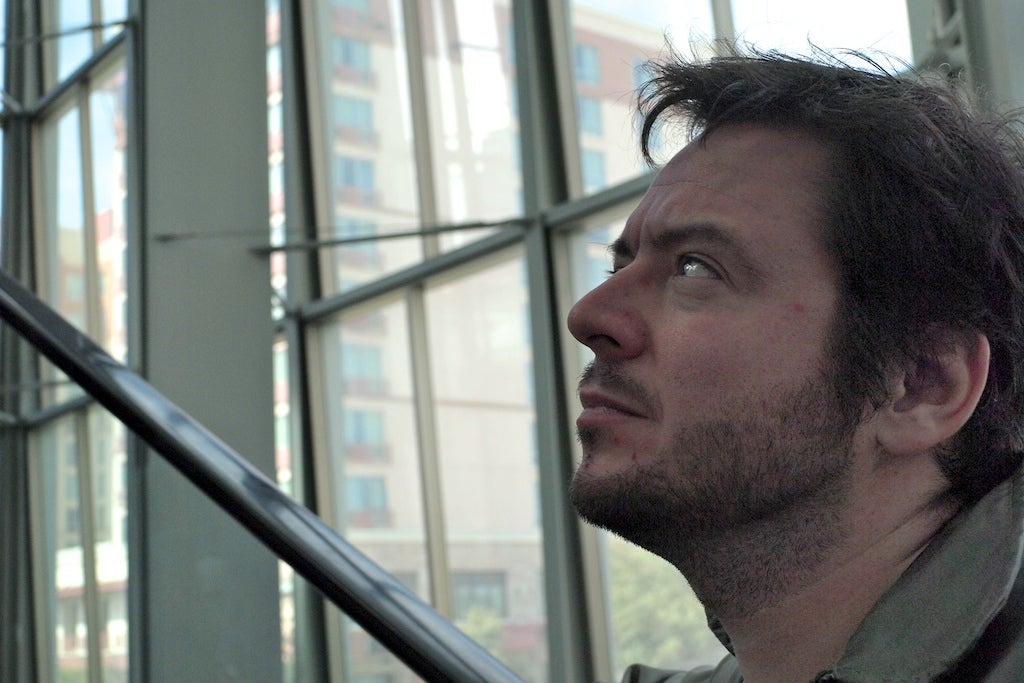 When your focus is on, the Leica takes great portraits (although nailing the manual focus while maintaining spontaneity can be tough). This image has the shadows boosted a bit to account for the backlighting (the detail was still there), but otherwise it is untouched. Mr. Jesus Diaz in Austin. 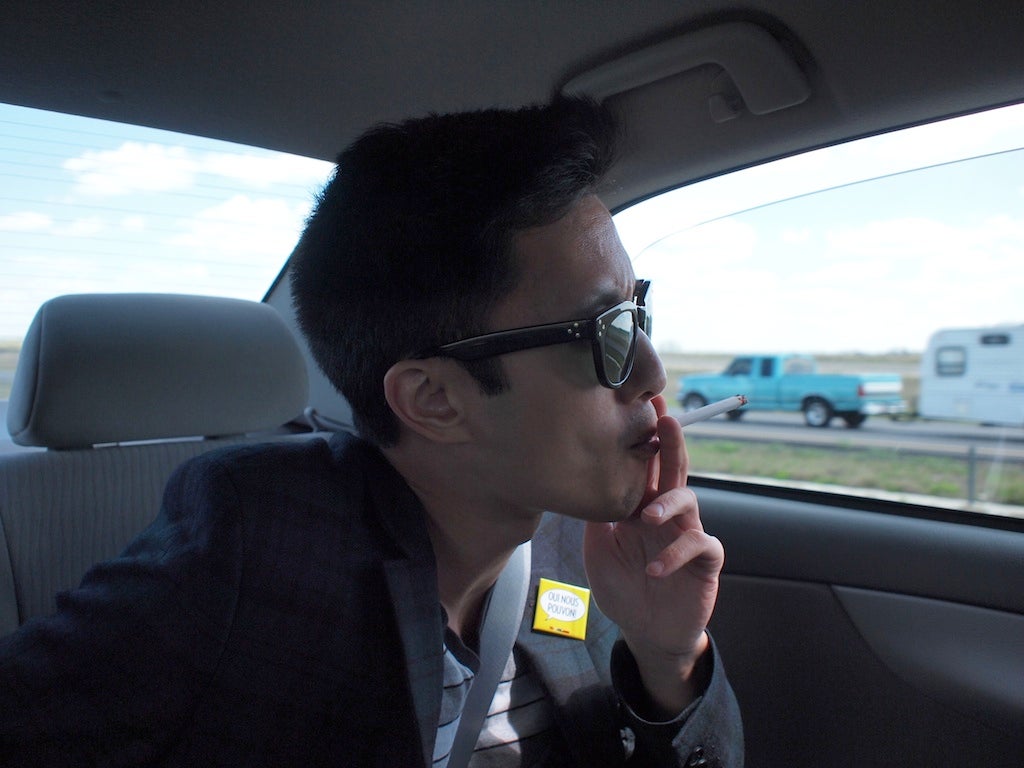 It’s a lot easier to point and fire in somewhat tricky situations, like the unevenly lit moving car here, with the autofucus Olympus lens mounted. 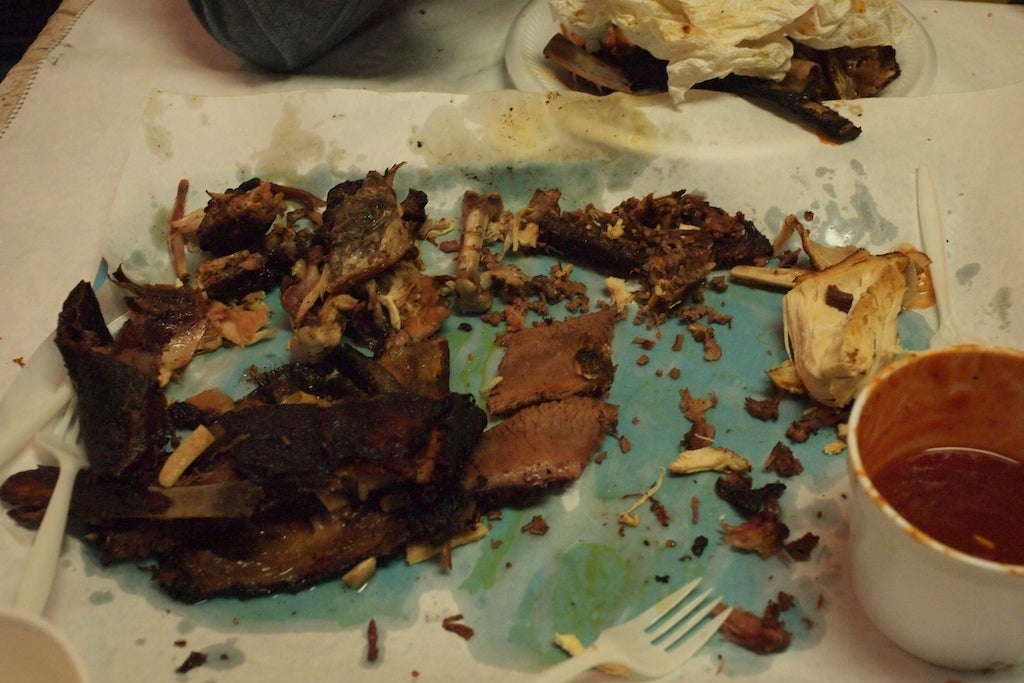 The aftermath of dinner at the great Sam’s BBQ in Austin is rendered nicely, even in tricky light. 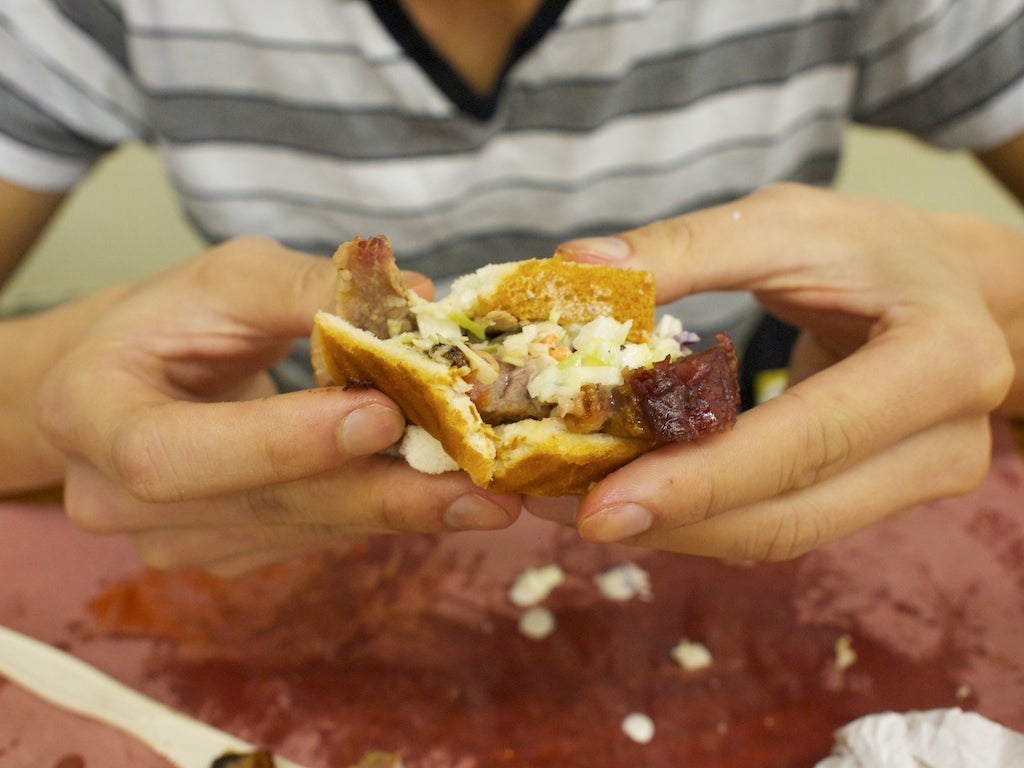 But an impromptu BBQ sandwich at Smitty’s in Lockhart also looks great rendered by the much cheaper Olympus–note the fine sharpness at the center and pleasing bokeh at low aperture.
Cameras
Gadgets