Eye-Fi's new Direct Mode wirelessly shoots photos right from your camera to your smartphone, so your Twitter photos will be faster and sharper than ever 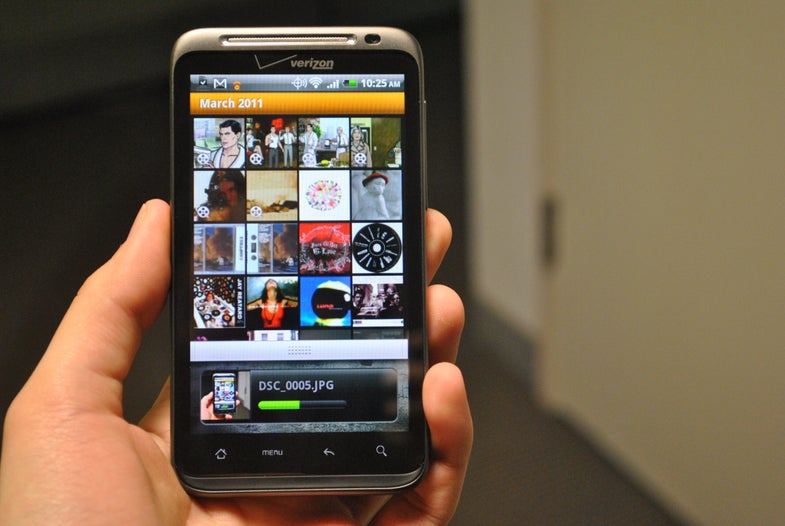 Why are we reviewing an SD card? Usually, SD cards are just there–these days, high-capacity cards are dirt-cheap and nearly disposable. They’re essential, but in the same way shoelaces are essential–you replace them when you need to, but you don’t give them a lot of thought. Eye-Fi’s new Direct Mode for its X2 line of SD cards, though, is different. Its main hook: The card wirelessly transfers photos from your camera to your iPhone or Android phone, from which you can upload to Facebook or Twitter, or do whatever you want. Basically, it gives your DSLR all the connectivity and power of your smartphone.

Eye-Fi cards are wireless-enabled SD cards, meant to be used with digital cameras (note: while SD is the overwhelming memory card standard, some high-end DSLRs use CompactFlash, and some older Sony cameras use the irritatingly proprietary MemoryStick format. Check before buying!). Prior to the release of Direct Mode, Eye-Fi cards were used to beam photos from a camera to a computer, a photo uploading service (like Flickr or Picasa) or to social networking sites, but those cards always required you to sync with a Wi-Fi hotspot, like in your home or a coffeeshop. That’s kind of a pain: You’d have to enter the network name and password of every hotspot you wanted to use in the Eye-Fi program on your computer, and then find one of those when you wanted to upload photos. Not fun! But since many of us now carry permanent wireless networks with us all the time, in the form of smartphones, why not just use that, and never have to worry about hotspots at all?

Direct Mode is a free firmware upgrade for all X2-branded Eye-Fi cards, of which there are several (either 4GB or 8GB), and it comes baked right into the new Eye-Fi Mobile X2 card. That’s accompanied by a new, free app for iPhone and Android, which essentially creates an ad-hoc wireless network between your phone and your SD card. It uses Wi-Fi, but you don’t need to be in a wireless hotspot or anything–this is just a simple device-to-device connection and can be done anywhere, anytime. The card sends its photos to your phone, so you can upload them to your social network, photo service, or email client of your choice. Or you can edit them, or use them in games, or set them as your wallpaper, or whatever else you do with photos on your smartphone. 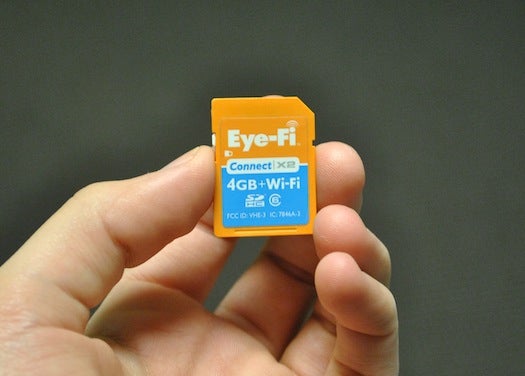 Probably the cheapest option to snag Direct Mode, and our recommendation. 4GB is plenty of space when you’re constantly backing up photos to the cloud.

Direct Mode, once it’s set up (no easy task–see the next section), works very well. Photos transfer automatically as you take them, and you’ve got the option to upload them to a photo hosting service like Flickr or Picasa on the fly. Smartphone cameras might be getting better and better, but they’re not, and probably will never be, as capable as a decent DSLR. So it’s a pretty great feeling to shoot a crystal-clear, properly lit photo with your expensive DSLR, then upload it to Twitter right then and there, without having to run home to sync with your computer.

It’s also nice that Direct Mode is available as a free upgrade to many existing Eye-Fi cards–those things aren’t cheap, and it’s good that users who just dropped $80 on an SD card won’t have to do it again for Direct Mode.

I should start by saying that I tried out Direct Mode immediately following the release of the app, and that most of the problems I had with setup won’t be shared by anyone who’s using the app now. But setup was, to be honest, pretty awful. The Android app had some odd problem that wouldn’t allow many users, including me, (I was using an HTC Thunderbolt) to log in, which makes using Direct Mode impossible. Eventually I talked with someone from Eye-Fi who advised me to first connect my phone to my home Wi-Fi network, which somehow un-broke it, so when I disconnected from my home network, it finally let me log in via 4G. Eye-Fi is doing their best to sort out the problem, so hopefully this won’t affect future users, but I can’t in good faith ignore the difficulties I had.

But even working properly, setup is kind of confusing. You have to sync the card with your computer, download the new firmware, download software for your Mac or PC, sync your card with your phone while it’s plugged into your computer, and only then can you start actually using the card. I’m not sure why the computer has to be involved at all–why can’t the smartphone app just discover the Eye-Fi card on its own? 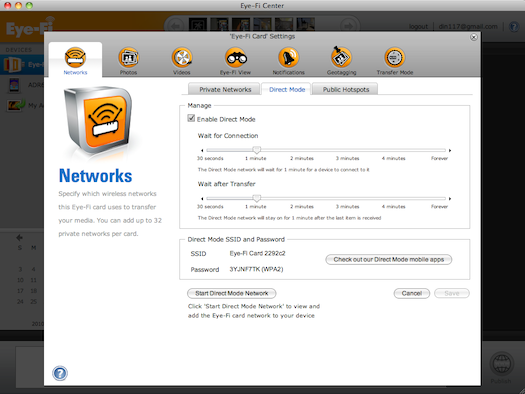 This is the software used on your computer to set up Direct Mode. It’s slightly more confusing than it needs to be.

The Android app is not thrilling–sort of tricky to set up, and for some reason it imports every photo and video on your phone, rather than just the stuff imported from an Eye-Fi card. Makes things unnecessarily cluttered, especially if you have a lot of album art. Just do Eye-Fi, Eye-Fi App! The sharing options are also confusing; you can only share to the services you’ve previously set up on your computer, so you can’t just share to Facebook unless you’ve put some forethought into it. I ended up avoiding the sharing options in the app altogether, and just using Android’s Gallery app to upload to my Twitter and Facebook account. It all works okay, but it’s not particularly elegant.

Free upgrade for existing X2 users–cards range from around $45 for the 4GB Connect X2 to $100 for the 8GB Pro X2. It’s expensive, considering you can get a non-wireless 8GB SD card for about twelve bucks, but given the extra features, I think the $45 Connect X2 is fairly price. $100 for an 8GB SD card is lunacy, though.

I can’t ignore the difficulties I had setting up Direct Mode, but it did all get taken care of and Eye-Fi’s technical folk were very proactive in getting things sorted. Now that it’s all set up, I don’t want to ever use a non-connected Wi-Fi card: My DSLR has never felt so versatile, and my smartphone has never felt so powerful (at least, as a camera). If you don’t have a DSLR, I’d say it’s probably not worth the admittedly steep entry price–most modern smartphone cameras are nearly as good as your average point-and-shoot camera, anyway. But if you take a lot of photos on the go, a Direct-Mode-enabled Eye-Fi would be a great addition to your toolkit.