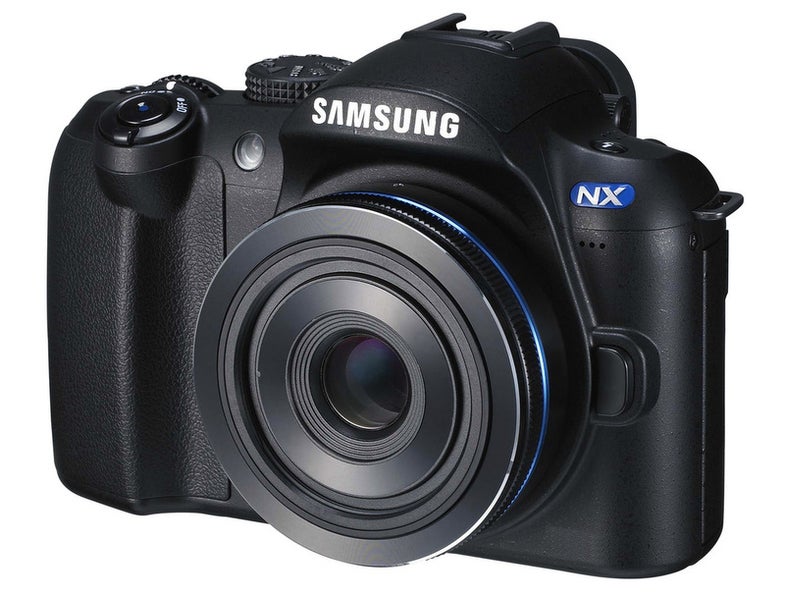 No matter how good your technique, ultimately it’s size that matters. I’m talking about cameras, of course.

Regardless of how sophisticated the camera or the photographer is, truly beautiful photos—with fine detail and rich exposure—rarely come from a point-and-shoot with an image sensor the size of the fingernail on your pinky. That’s usually too little silicon to soak up enough light for a good picture. For quality, you need the giant slab found in an SLR, which is from about 15 to 30 times larger.

But you don’t necessarily need an SLR—with a viewfinder that lets you look directly through the lens. That’s what Samsung believes, anyway. Its new NX Series of cameras—announced today and due in the “second half of 2009″—have the big sensor and ability to change lenses but not the namesake single-lens-reflex viewfinder of an SLR.

Why buy this wannabe SLR instead of the real thing? So you can carry it around easily. Looking through the lens of an SLR requires some bulky, complex optics – basically an upside-down periscope in which a mirror in front of the sensor bounces images up to a prism or mirrors at the top of the camera, by the viewfinder. Take all that out, and you can make a notably smaller, and theoretically cheaper, camera.

But will it satisfy anyone or be the worst of both worlds—too big to put in your pocket and too limited for photo enthusiasts. History suggests disappointment.
Sony tried the same thing in 2005 with the Sony Cyber-shot DSC-R1 (see a great review here). It also had the big sensor (known as APS), along with a mighty (non-removable) 5X zoom lens—equal to 24-120 millimeters. Sony doesn’t sell the R1 anymore, nor any other cameras like it. Instead, Sony jumped into the SLR business and, after a rough start, is now producing pretty competent models under the Alpha brand.

I tried and liked the R1, but I didn’t buy one. I missed being able to look right through the lens when I set up my shots (even a nice LCD is a poor substitute). And when you take out the periscope of an SLR, you also remove their hyper-fast focusing system and have to deal instead with point-and-shoot focus speeds (which are getting better, but still don’t measure up). Also, despite the great sensor and great lens, the image quality still didn’t match up to even my older Canon SLR (the original Digital Rebel).

A quirky camera company called Sigma tried putting an SLR sensor in a compact camera last year with the DP1. I didn’t test the camera, but Imaging Resource gave it a thorough try. The Sigma was great in some ways, according to their review: for example, image detail was fantastic. But it was a mess in so man others, being painfully slow, and having inconsistent autofocus and exposure, to name just a few glitches.

Then came Panasonic with its Lumix G1. This uses the so-called 4/3 sensor found in all their SLRs, which is a little smaller than a regular SLR’s but still plenty big. (As with the new Samsung, you can even switch lenses like on an SLR; all that’s missing is the periscope.) I had fund testing the G1. I got some great indoor photos with it, and I liked the bright electronic viewfinder (basically a little LCD that you hold your eye up to) because it let me set up photos in a nightclub that was murky-dark until the flash went off. Even the autofocus was pretty good.

But photos I took outside had sickly colors and fuzzy details. And really, it wasn’t THAT much smaller than an SLR—not enough for me to take it along in situations when I wouldn’t just pack the real thing.

I’m not sure why all these cameras disappointed. In theory, they should have taken photos as nice as those from a real SLR. Maybe it’s because the companies that made them didn’t have a lot of experience with great SLRs. (Sony hadn’t made any at the time, Panasonic is pretty new to the business, and Sigma’s had a spotty record.)

That doesn’t bode well for Samsung, either. Up till now, their SLRs have literally just been rebranded Pentax models. Samsung does make the sensors for some of those Pentax cameras. But Sony, Panasonic and Sigma are also sensor manufacturers. A good sensor is necessary for good photos, but it’s not enough on its own.

Maybe Samsung will break the curse of quasi-SLRs and produce a winner with the NX when it comes out later this year. Either way, we’ll let you know.