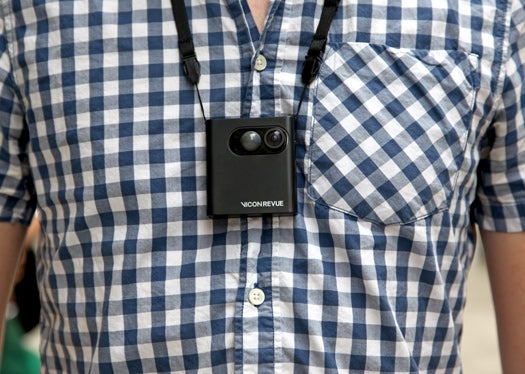 Any sentimentalist knows why we carry cameras: to capture memories. And a memory captured is one you don’t need to remember yourself. That’s more or less the idea behind the new Vicon Revue. The device, which is based on a Microsoft Research project, is a three-ounce camera that automatically snaps away all day long, remembering events so you don’t have to. We took it out for a test drive.

Worn around your neck, the camera takes the pictures as you move around and enter new environments with their different levels of light, temperatures or even wind speeds. It has built-in sensors, including an infrared eye and an accelerometer, to register these changes and tell it to shoot at a rapid-fire speed of one picture per second until conditions settle.

The camera also comes with software that creates video flipbooks of the images — basically visual memory logs. The applications of the log are very practical: Think a recall aid for people with Alzheimer’s or memory loss. But for our purposes, it was an automatic life blogger. Nifty, right?

For a person like myself, with a criminally bad memory, the camera did help me remember finer details from a Mets-Yankees Subway Series game in mid-June. For instance, I’d forgotten that I’d eaten a (quite bland) BBQ chicken sandwich, subsequently washed it down with a bubble tea, and lamented my poor-sandwich choice when I spied some pulled pork during a tour of the other stadium food vendors.

The sensors, for the most part, picked up on faces I saw when I was moving around. When I walked through Times Square the Thursday before the baseball game, the camera rapidly shot pictures as I slowed down, jerked from side to side and sped up to evade ongoing foot traffic.

As for its manual-control side buttons, I have mixed feelings. Its privacy button, which when pressed prevents the camera from shooting for two minutes, helped me out when I used the bathroom. The other button, a manual shutter, did not seem to work so well; I tried to take a shot of two yoginis in the middle of Times Square, but because the camera does not have a preview screen, I couldn’t tell whether I had taken the shot. I later learned that I didn’t.

Even though the camera’s fisheye lens is tilted slightly upward to see what your eyes do, wearing it around your neck misses a vital detail: you can turn your head without turning your whole body. At the baseball game, for example, when I leaned to the side to say something to my friends, the camera continued to point forward at the field, rather than capture the face of the person I was talking to.

On the whole, the Revue’s pictures were quite low-res and blurry, but given that it can store several days’ worth of activity, that’s a mixed bag. And, when you view them as a quick-moving slideshow, you’ll hardly have time to notice.

And forget about getting a photo of anything if you wear the camera in the dark. Take, for instance, my trip to New Haven, Conn., to attend a friend’s birthday party. All I see in the picture is darkness and the blinding glare of the streetlights, even though I remember passing by several people on way to my friend’s house.

I had planned to take shots of various other events too, such as a visit to the Guggenheim in New York. But because the camera’s battery meter was not very intuitive (a blinking green light telling that sometime within the next three hours, the camera will shut off, rather than a battery meter traditionally found on digital cameras), I did not charge the camera and thus lost the opportunity to preserve a memory.

Still, the camera ultimately gets its job done—-if it takes shots before sundown, that is. With it, I remember the small details: those cues, those sandwiches that help me recall other details and complete my experiences.