Lytro's promise of post-shot refocusing is unlike anything we've ever seen--but does it live up to expectations? 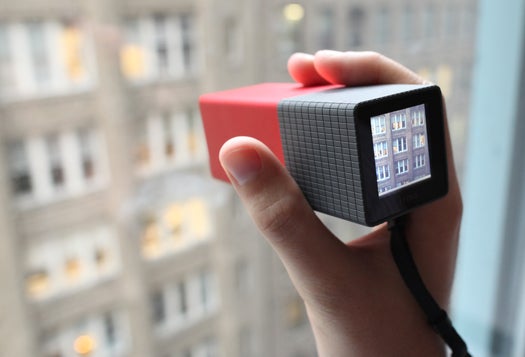 To win our Innovation of the Year award, the Lytro had to captivate us enough for us to pass over significant medical diagnostic breakthroughs and a complete reinvention of the internal combustion engine–and it did. So we’re naturally excited about the opportunity to spend a little QT with the Light-Field camera. The Lytro, which is culmination of over a decade of work by CEO Ren Ng in the world of light-field photography, is the first camera that allows its user to refocus an image after it’s taken. It sounds unbelievable, but after taking our own pics with the Lytro (below), we’re happy to report that it’s reality.

Click to launch a gallery of Lytro-taken shots, as well as a tour of the camera’s hardware.

So, a quick refresher on what exactly this light-field stuff is all about: Typical digital cameras align a lens in front of an image sensor, which captures the picture. The Lytro adds an intermediate step, an array of micro-lenses between the primary lens and the image sensor. That array fractures the light that passes through the lens into thousands of discrete light paths, which the sensor and internal processor save as a single .LPF (light-field picture) file. Your standard digital image is composed from pixel data, like color and sharpness, but pixels in a light-field picture add directional information to that mix. When a user decides where in the picture the focus should be, the image is created pixel-by-pixel from either the camera’s internal processor and software or a desktop app.

Given its fundamentally different way of dealing with imagery, the Lytro specs out differently than any other digital camera. Worrying to those who have to create spec lists is the lack of a true megapixel count or relatable sensor specs. Its sensor is physically slightly smaller than your everyday point-and-shoot, but it’s designed to capture more data. The Lytro’s sensor captures 11 megarays of data (“megarays” refers to the number of light paths the sensor captures), which, if flattened into a simple JPEG–removing the ability to refocus the image–results in a three-megapixel image. That sounds low, but remember that the megapixel count refers only to the size of the photo, not to its quality. The only manual control left to the user is exposure–you can’t actually set it, but you can tap on the screen to tell the Lytro where in the image you’d like it to base its exposure.

Handling the Lytro is also unlike anything you’re likely to have used before. Users frame shots by holding the 4.4-inch-long device like a pirate looking through a spyglass, staring down the barrel through a 1.5-inch touchscreen/viewfinder on the rear (more on this in the gallery). The front two-thirds of the camera is an f/2 optical zoom lens (it zooms up to 8x) encased in aluminum, while all the controls that aren’t touchscreen-based–shutter, capacitive zoom slider, and power button–are situated on the rubberized grip. Cameras come with either 8 or 16 GB of internal storage, which give you space for 350 or 750 images, respectively (if you’re nit-picking the math on that one, the difference is due to the software/OS taking up precious storage). The camera feels great: solid but not heavy, with a thoughtful, modern design. The magnetic lens cover is a particularly nice touch.

Smartphone or iPod touch users will have no issue navigating on the Lytro, which is very responsive. In live-view, they access a pop-up menu by pulling up from the bottom of the screen. To scroll through previous shots, swipe from left to right as on an iDevice. In playback mode, they can “star” images as favorites, which gives those images priority when syncing with a computer later.

When we set out to shoot with the Lytro for the first time, it was immediately clear that, as we’ve said before, this is an entirely new type of digital photography. And, as with anything that’s truly completely new, the Lytro comes with a rather steep learning curve. Our “see the picture, take the picture” mentality for point-and-shoot cameras needed some rewiring. The trick with the Lytro is to internalize where it’s likely to perceive different focal planes; images with a clear fore- middle- and background separated by several feet provide the clearest examples of what light-field photography can do.

Once you get the swing of it, the Lytro does exactly what it claims to do. On every photo we took, we could change the focal point with a click — but keep in mind that there are shades of gray involved here. Often, when subjects were grouped closely, the shift in focus from point to point was nearly imperceptible. This is how the Lytro acts by default in “everyday mode,” which limits zoom to 3.5x and has a minimum focusing distance of about 5 inches. Everyday mode is ideal for images where the primary subject and secondary one are far from both the lens and one another, much like our little squirrel friend and his faraway observer.

To provide more control, Lytro has added what it calls “creative mode,” which allows the users to cheat the optics to make clear distinctions between focal planes. This mode extends the camera’s zoom range up to its maximum 8x and brings its minimum focusing distance down to nil. Before taking the shot, tap the screen where you want the Lytro to think of as the “middle” of your image from front-to-back, almost like on a tap-to-focus smartphone. Doing so forces the camera (quite literally, in fact; there is an audible mechanical noise inside the lens casing when you select a new midpoint) to perceive that plane as the center of its focal range and assess other planes in front of and behind it more clearly.

We had the most luck using creative mode for macro shots, like groups of balls on a coffee table. But it’s also useful to separate objects that are close to one another in the foreground, while still keeping a distinctive background. 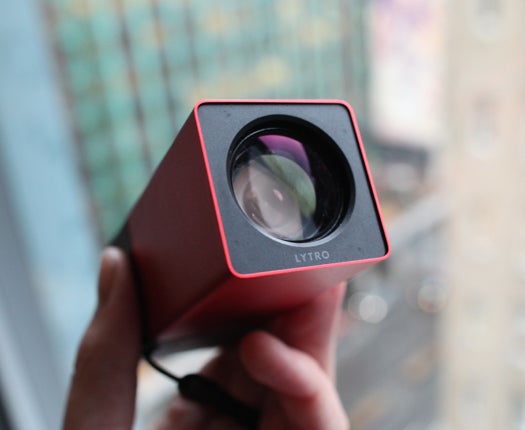 Lytro, Pointed at You

If you’re running on a Mac, uploading pics from the Lytro is a true plug-and-play experience. (A Windows client is coming soon.) When you plug the camera in over USB for the first time, it automatically launches an installer for its desktop software. The camera then begins transferring images to the computer – your starred favorites go first, then the rest of the lot. This can take a while, a long while. Because each image file contains thousands of light paths, one file can bloat up to 12MB. From there, you can upload the full clickable image to Lytro.com or Facebook, or export a still JPEG with the point of focus you want selected. Should you wish to print those image, Lytro recommends you not go any larger than a 5-by-7 equivalent.

Right now the Lytro is essentially a one-trick pony, but let’s not forget that it’s quite the trick. Think of it this way: this camera captures multiple depths of field with one shutter click, a feat only possible previously with either a whole room filled with lenses or taking multiple versions of the same image with a regular camera. We’d love to be able to say that the final images it creates are flawless, but that’s sadly not the case; in low-light there’s a noticeable amount of noise–especially at high ISOs. Image blur is a real issue, as well; the slightest shake of the hand or sudden movement from the subject renders shots irretrievably blurry.

As Lytro continues to refine its image-processing engine, you’ll be able to edit images to be entirely in focus or choose two distinctive light paths in order to create a 3-D effect without a dedicated 3-D camera. But the promise of light-field photography for the everyday Joe isn’t limited to this one device; should the Lytro’s capabilities be merged with other now-common features (adjusting ISO, exposure, white balance, and the like), it could fundamentally change how we think about a large portion of modern photography. A light-field engine on a smartphone, for instance, could remove much of the guess-work from on-the-fly shots and allow those pics to have depth previously reserved for today’s DSLRs and interchangeable-lens cameras.

Embedded interactive images taken by Corinne Iozzio. For an assessment of the Lytro from a photographer’s point of view, check out Popular Photography’s take. 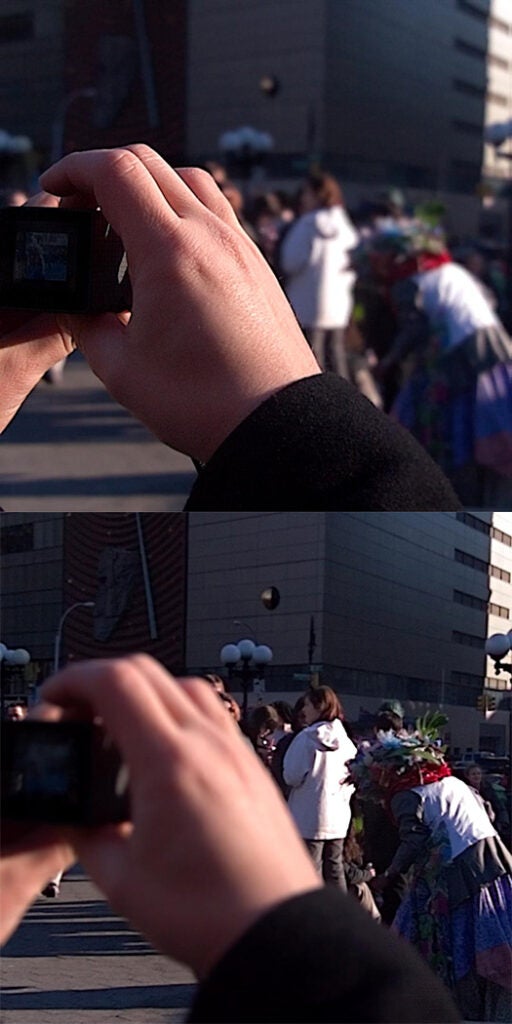 Sorry to this stranger. Did it look like we were taking a picture of this camera? We were! And also we weren’t. 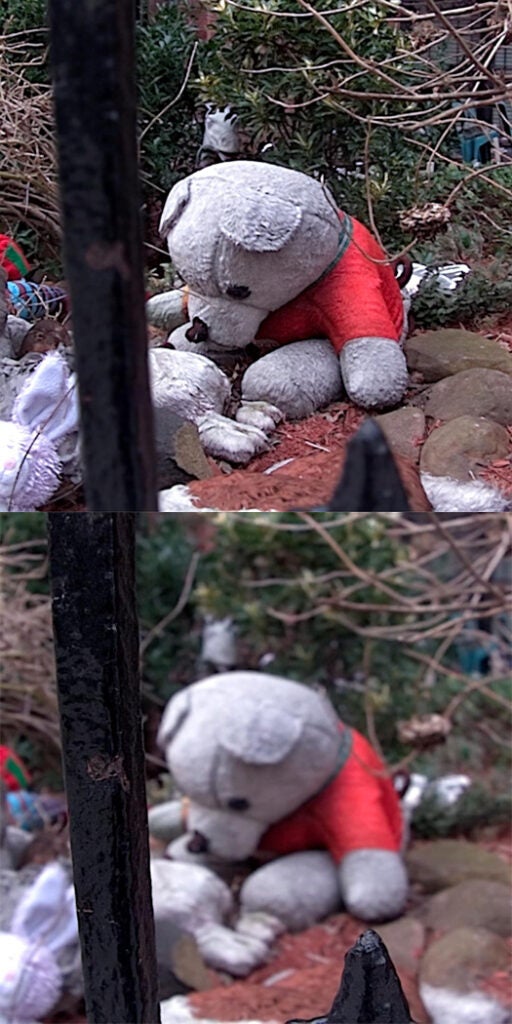 Sorry, sad bear. We can unfocus on you later if you’d rather not be seen like this. 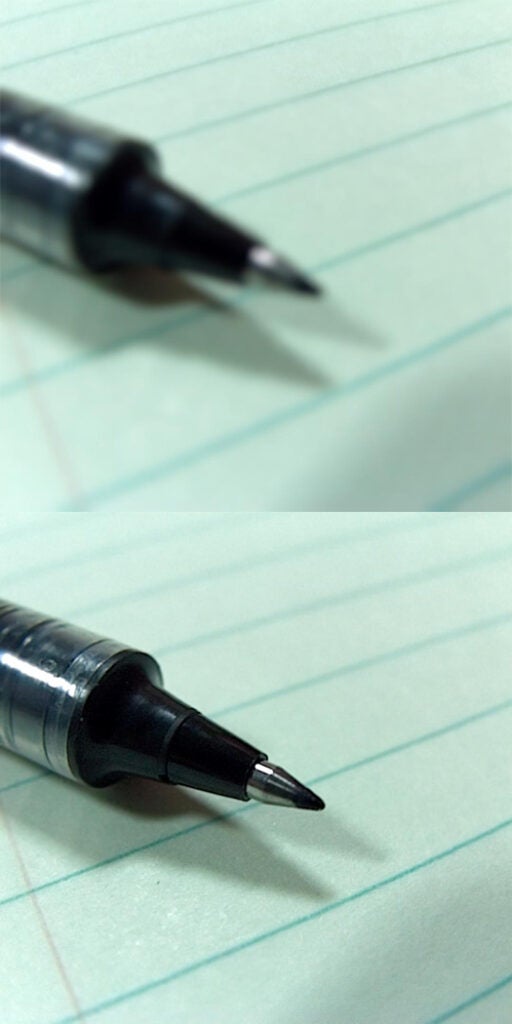 The Lytro’s macro mode shows either of these arcane writing instruments. 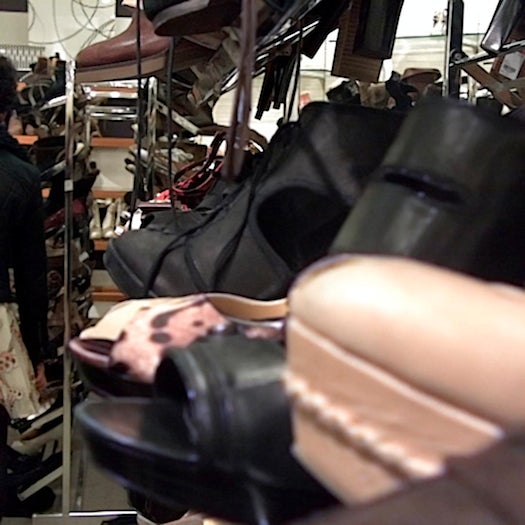 The following few pictures show the focus moving slightly, bit by bit, among this rack of shoes. 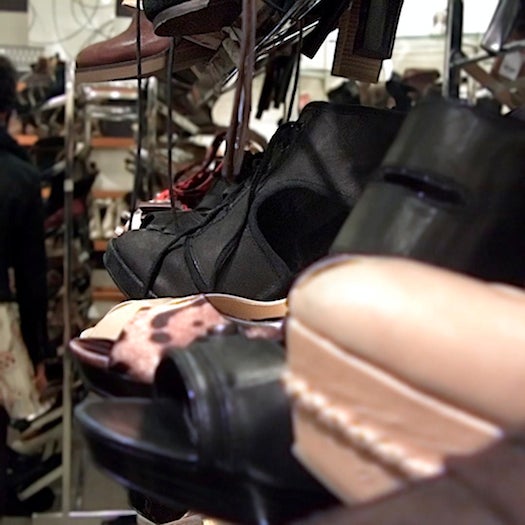 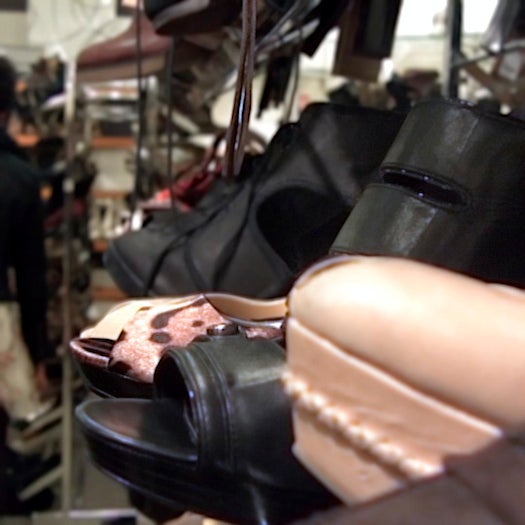 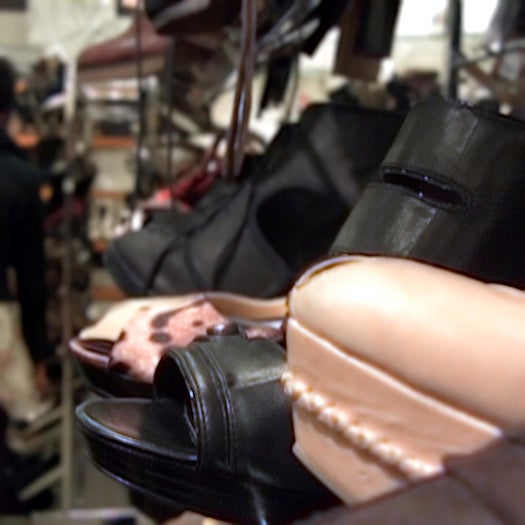 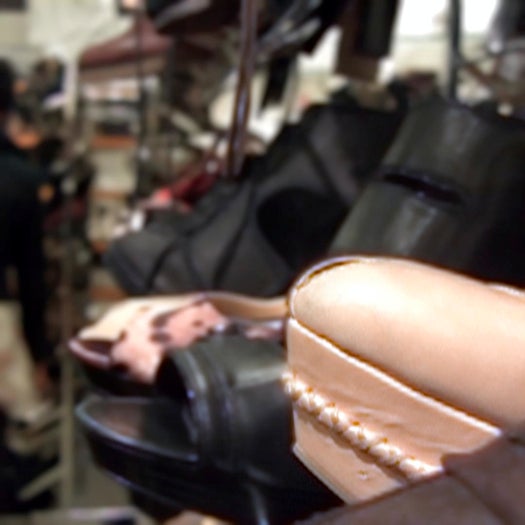 And done! Now you can finally see the detail of that tan boot/shoe thing. 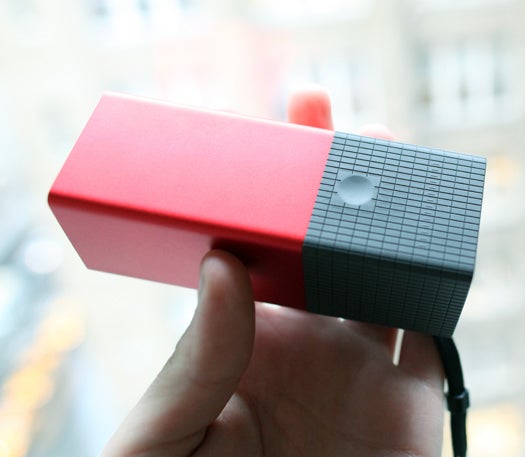 The top of the Lytro, showing the shutter button and the little ridged strip that controls zoom. 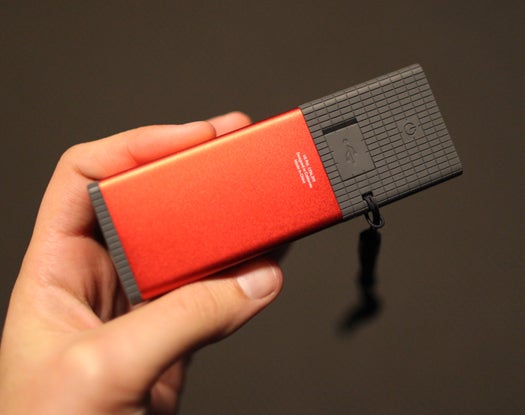 Here’s the underside, with the power button and flap concealing the USB port. It’s a microUSB, the same standard used on most Android (really, most non-iPhone) smartphones, as well as the Kindle and a bunch of other gadgets.
Corinne Iozzio