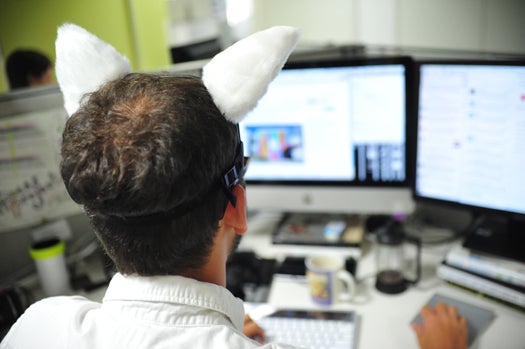 We weren’t able to fly out to San Francisco for today’s iPhone 5 event, but we still wanted to do a liveblog, because nothing documents the stress/excitement-induced breakdown of a blogger better, and we can’t deprive you all of that. Luckily, we have a pair of these Necomimi mind-controlled cat ears lying around–they use EEG to measure alpha and beta brainwaves, and wave in response. If your mind is alert, the ears perk right up. If you’re kind of bored or your mind is wandering, they droop. And if you’re “in a state of high interest,” they’ll waggle back and forth. 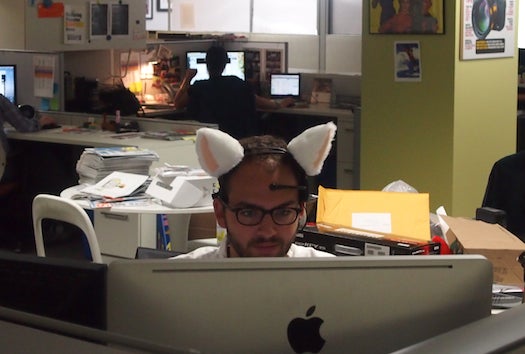 So, I’ll be adding some feedback from the Necomimi throughout the liveblog. Does a new, smaller charging port get me in a state of high interest? Here we go! (Reverse-chronological order–i.e., newest updates first.)

2:56: That seems like it’s it. My ears are upright but sluggish, much like myself. I am taking them off and probably taking a nap. Thanks to everyone for reading this!

2:52: I am just listening to “Gangnam Style” like I always do. Ears go nuts when that singer screams at a girl’s butt and then horse-dances away. 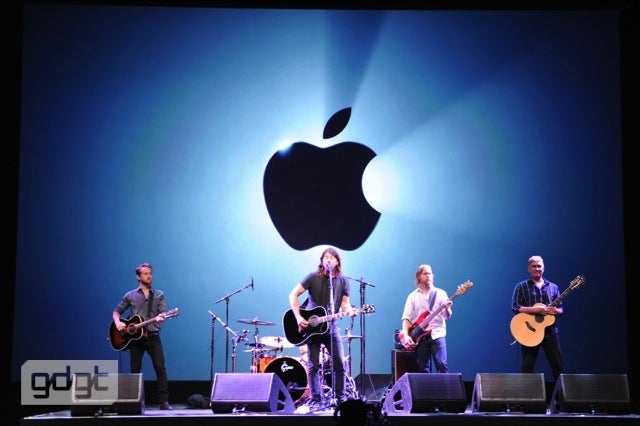 2:47: Dave Grohl looks to his left. He stops playing. “Dude, who even are you?” he yells at the middle-aged man awkwardly holding, not playing, an acoustic guitar. Nobody in the audience notices. They are all blogging furiously. Dave Grohl throws his guitar down and storms out. “Every Tear Is a Waterfall” by Coldplay comes on over the PA.

2:45: Foo Fighters are on stage. I like “Everlong” as much as the next idiot wearing robotic cat ears at work but I am pretty sure there are bands besides Foo Fighters and Coldplay, Apple.

2:43: It’s hard to figure out how my cat ears are reacting to whatever boasting Tim Cook is doing because the other PopSci writers are shooting me with Nerf darts to see what my ears do. (I was told that they waggled furiously while my face stayed motionless.) 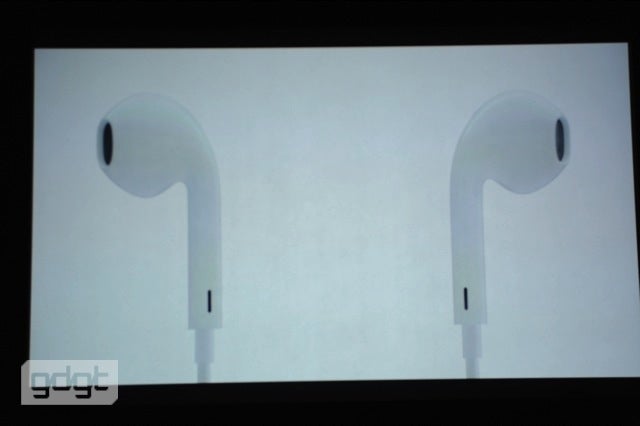 2:38: The EarPods look like the nipple-ports of space robots. You’ll get them with the new iPhone and iPods.

2:34: Oh, whoa, this is actually a thing. Apple announces the disastrously, absurdly named EarPods. They spent three years designing them and evidently about four seconds naming them. Good move, though, since Apple earbuds have long been a complete joke.

2:33: The new iPod Touch has a wrist strap, because everything looks cooler when you limply dangle it from your wrist.

2:25: There’s a new iPod Touch, it’s made of aluminum, it’s faster and thinner, blah blah. Look, there’s only one thing I want to talk about here. When we talk about these iPods, let’s pluralize them correctly. If you have more than one iPod Touch, you have several iPods Touch. You do not have iPod Touches. That is wrong and we should shame whoever says it. Think surgeons general or attorneys general. LET THE WORD GO FORTH. 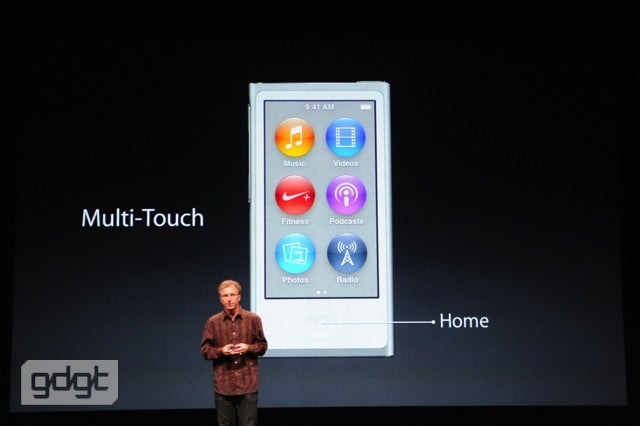 2:19: iPod Nano now has multitouch, and a 2.5-inch screen (biggest ever for the Nano), plus Bluetooth, so it can work with the completely awesome Jawbone Jambox. Looks kinda like Samsung’s old P2, actually. Everyone steals from everyone! New Nano doesn’t have access to the App Store, but it is available in several colors. One of them is just a shadow to me. Is that green? It looks like a ghost

2:11: New iTunes looks fine, I guess, more emphasis on cover art, bit simpler and cleaner. Hard to get excited about iTunes when stuff like Rdio exists and is the best thing ever.

2:04: That’s it for the iPhone 5! Now Tim Cook is talking about iTunes. iTunes is boring. Know what’s not boring? Guy Fieri’s Wikipedia page. When I read that he has a dog named ROCKSTAR my ears went crazy. ALERT ALERT ALERT GUY FIERI’S DOG IS NAMED ROCKSTAR *wagglewagglewaggle* 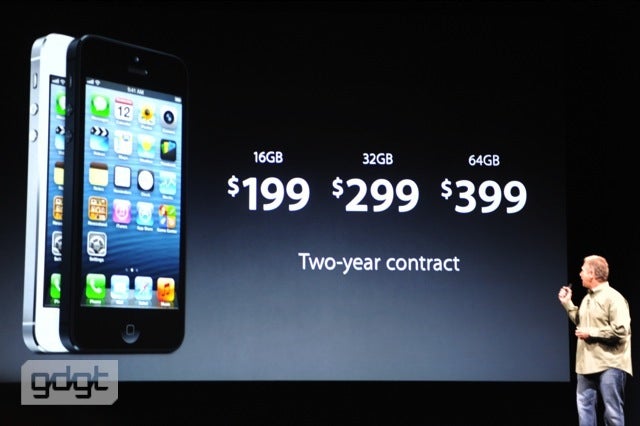 1:56: I never understand when tech execs are so eager to tell you that their phone is the best they’ve ever made. Were they all in a meeting, and one guy was like “so, I’m thinking we make a phone that’s like pretty good, but not quite as good as the last one,” and then the visionary CEO is like “I have a revolutionary idea. What if we made it…better?” and then all anyone hears is the ting ting ting sound of monocles falling into a fine mahogany executive table.

1:53: Alert @Neurowear, I have been wearing your cat ears for an hour, have not gotten a single phone number from any cute science girls, are they broken

1:47: I’m getting a serious headache. Whether it’s from these noisy robot cat ears or from the choices I’ve made in my life that led me to wear them and liveblog an Apple event at the same time, I’m not sure.

1:44: Apple’s demonstrating Maps stuff. I’ve been using Apple Maps in the iOS 6 beta for a couple months now, and it is distinctly worse than Google Maps. I once searched for the “Wythe Hotel,” which is a giant and very notable and slightly awful hotel in Williamsburg, and it directed me to Ohio. I was in Williamsburg at the time. 🙁

1:43: Got my first email from a robot that begins “Following the announcement of Apple’s iPhone 5.” Ears drooped, then the rest of my body drooped, now I am on the floor imitating a sad puddle.

1:41: ATTN: Joel Johnson was the first person on Twitter to make a joke about Bohemian Rhapsody re: the new connector. I have summarily unfollowed him.

1:39: Finally, the new connector. It’s called Lightning, and it’s reversible, and 80% smaller. There’ll be an adapter for the old 30-pin cable. 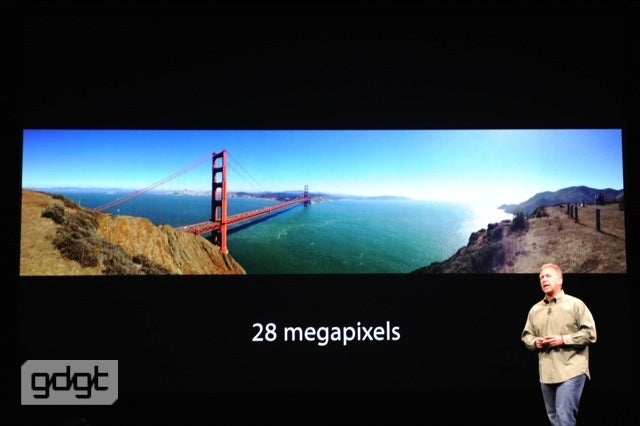 1:35: Built-in panorama, but, like, Apple isn’t exactly the first to do that, even to do it exactly this way (hold phone, sweep across the sky). Microsoft’s Photosynth, for example, is an iOS app that is amazing. And Sony’s Sweep Panorama is pretty much the same thing. Ears: Finally got some “state of high interest” waggling! I think this is because Stan Horaczek of PopPhoto just had to explain all that camera stuff to me. Thanks Stan!

1:32: iPhone 5’s camera is not wildly different, but in my opinion they’re going at it the right way. What’s great about the iPhone 4 and 4S is that they take (mostly) the picture you want to take, without having to mess with it too much–we’re all for manual controls, but a phone camera is mostly in the moment. New stuff: 40% faster capture, better low light mode, a tougher piece of glass (with sapphire crystal coating) in front of the lens. Sensor isn’t bigger, though, so any low-light improvement will be from processing–squashing noise after the fact, rather than preventing it.

1:29: Apple says they’ve “matched or exceeded” the battery life of the iPhone 4S, which had pretty damned good battery life. Claims 8 hours of browsing on LTE, which would be nuts. Most crap out after around half that. 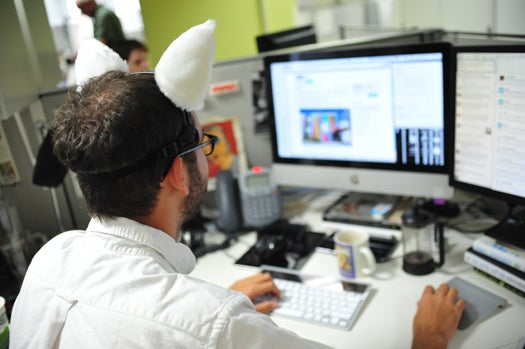 1:28: Hope all my writing mentors and old professors are proud of me today.

1:25: New chip, called the A6. Supposedly twice as fast processing, twice as fast graphics, and a smaller footprint. Ears: There’s a little clip that goes onto your earlobe. It’s starting to annoy me. Ears are a little droopy.

1:21: LTE! That might be another reason for making the whole thing bigger–it needs to house an LTE antenna, and it also needs to have a bigger battery (which requires a bigger phone body) to handle the stress of ultra-fast wireless. This is great, though–LTE is legitimately amazing. Ears: Alert. Really hoping the cute girl from the other side of the office doesn’t suddenly decide to act on our obvious chemistry. Just wait like an hour, cute girl!

1:19: It’s a big deal that the aspect ratio has changed, because that was a major strength of all iPhones–you knew an app would fit comfortably on your phone, no matter what. But old apps will be letterboxed on the iPhone 5–black bars on the top and bottom of the screen. Kinda sucks. Hope the increase in screens size is worth it. It does have an extra row of icons on the homescreen, which is nice, I guess.

1:16: Lighter, thinner, but taller. It’ll have a 4-inch display–the first change from the 3.5-inch screen in the entirety of the iPhone line. Resolution: 1136 x 640, which Apple is again calling a Retina Display. Ear update: Mostly alert. 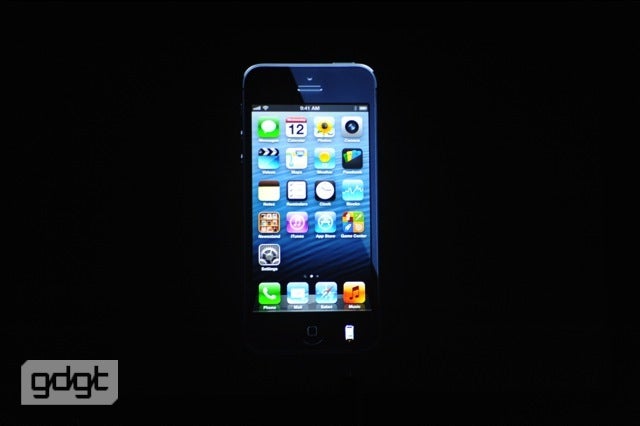 1:14: The new iPhone will be called the iPhone 5! Wowowowowowow 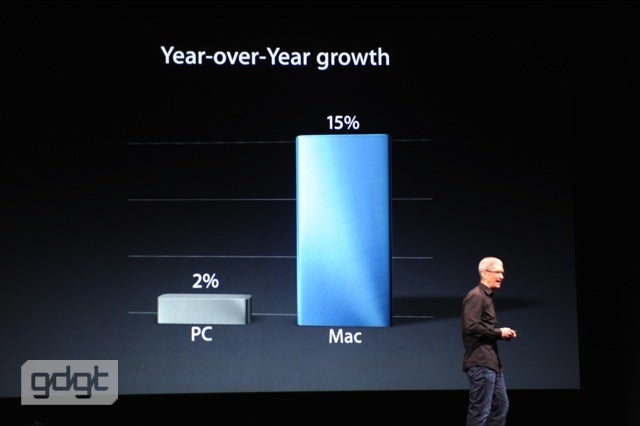 1:07: Tim Cook doing more PowerPoints of bar graphs and stuff. Ears are, surprisingly, alert. Should I have gone to business school? Are these ears telling me something about myself I’d never have known? Like a raging interest in bar graphs?

1:00: Looking at pictures of seated tech journalists. Ears droop so hard they snap off and fall into my lap. Hey Neurowear, can you send me another pair of these quick-like?

12:58: About to start. Ears alternating between droopy (bored) and perky (alert), but mostly I appear to be borzzzzzzzzz

12:53: Just realized you guys might want some info on what to expect today. Well, probably an iPhone, probably named the iPhone 5 (because of the shadow on the invite), which is weird, given that this’ll be the sixth iPhone. It looks like we’ll see a new design, and some firsts for Apple–this phone will probably have a new, smaller dock connector, as well as a screen with a different ratio (it’ll be a little taller, most likely a 16:9 ratio, like every other phone out there).

Oh, and the back of the phone might be two-tone aluminum. That’s great! Glass is pretty, but it is also very good at breaking.

12:50: I don’t feel any cat-like powers or abilities yet, although I do believe somebody in the kitchen is microwaving one of the lesser flavors of Stouffer’s Cat Food.

12:38: I’m using GDGT’s excellent liveblog to actually see what’s happening. Right now everyone seems to be hanging out, talking about the latest rumors, and almost certainly talking shit about Android while praising the Nokia Lumia 920. That’s a guess but I’d bet I’m right. 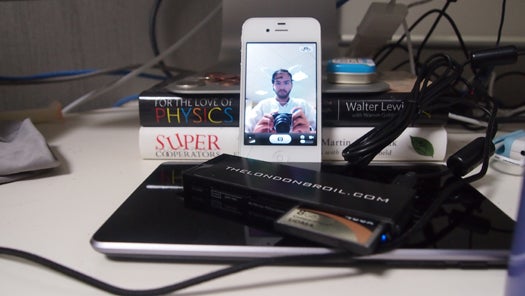 12:30: This is how I’m monitoring my cat ears, since I can’t actually see them when they’re on my head. (It’s an iPhone 4S right underneath my monitor, front-facing camera staring at me.) Judging by the level of droop here, I was not very engaged while taking this picture.