A totally re-thought version of Android on a gorgeous phone--but why is it so inflexible? 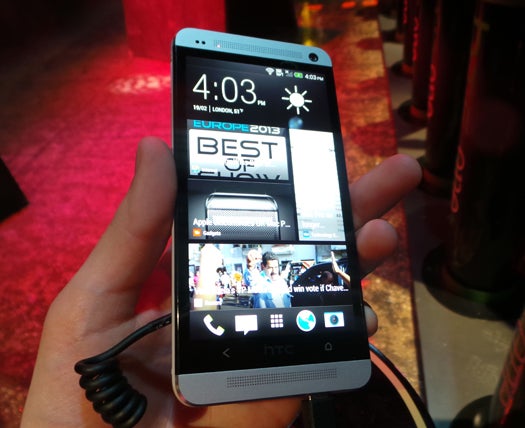 Today at a simultaneous announcement in New York City and London, HTC announced the HTC One, the company’s new flagship phone. It’s an Android device, but barely looks like it. That’s because HTC’s Sense, a user-interface overhaul, has also gotten a huge update, and it doesn’t resemble regular, stock Android (which, as we saw in the Google Nexus 4, is pretty fantastic) so much as Windows Phone or even the popular app Flipboard.

Instead of presenting you with a typical homescreen–apps, widgets, that kind of thing–you get a modified grid of images, which are pulled from your tweets, Facebook updates, notifications, news outlets, and all kinds of other information. It’s an attempt to move away from a more “computer-y” style, of files and icons and folders, and into a more “mobile” sort of operation, with a stream of information. HTC’s calling it “Blink Feed.”

Really, what it is is Flipboard–you tell it what categories you’re interested in (design, tech, news, sports) and it auto-populates your homescreen with the appropriate content. But unlike Flipboard, you can’t manually add your own RSS feeds. Popular Science will probably show up in the tech/science feeds, but if you like more niche publications like, say, The Awl? You’re out of luck. I’m not sure why that feature isn’t included; Flipboard lets you add custom RSS feeds and it works beautifully. HTC did tell me that they’re constantly “adding partners,” but I’d prefer they let me add them myself rather than waiting.

The homescreen also has some limitations as regards notifications. Android has always been fantastic at notifications, and the traditional swipe-down-from-the-top notification shade is still there, but I’d like to see stuff like emails, social networking interactions, text messages, and phone calls in the Blink Feed. You can get some stuff–calendar, Twitter, and Facebook were all included–but not text messages? Weird. And there doesn’t seem to be a way to organize your Blink Feed items by moving them around; in the demo unit I played with, there was a calendar notification, but it was way down at the bottom, and I couldn’t figure out how to make it more prominent up top. 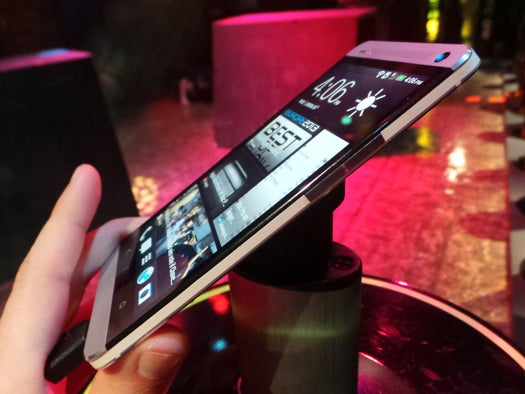 HTC One From The Side

Hardware: The hardware is great. Probably the best-feeling phone this side of the iPhone 5. It’s super-thin aluminum, available in either silver or black, and it feels just fantastic. The One has a 4.7-inch full HD screen (that’s a 1920 x 1080 resolution), which in a dark noisy cavern on Manhattan’s west side, full of flashing red lights and parkour performers, looked excellent. I’m looking forward to trying it out in a less weird environment.

The phone also has some nice audio bonuses–it’s branded with Beats By Dre, though that doesn’t really mean much other than you’ll get a bass-heavy equalizer if you want it. But I love that the phone has big, front-facing dual stereo speakers, one above and one below the screen. It was hard to get a sense for their quality in this noisy room, but it definitely sounds promising. (Note: HTC said “People don’t hear in mono. We hear in stereo.” This is a good science fact.)

And HTC is taking a stand with the camera–“we don’t care about megapixels.” The HTC One has a 4.3-megapixel camera. Yeah, I know. But HTC is absolutely correct in noting that megapixel count is essentially a boondoggle, and that the size of the pixels is much more important. You can think of pixels as buckets which catch light. More buckets doesn’t necessarily mean more light, especially if those buckets are increasingly tiny. But having big, or just better buckets, is a much better indication that the camera is catching more light. When you have a few million buckets, you’ll end up with more “noise” in the photo because so many of those pixels will be catching no light at all. But with fewer buckets in the same space, you won’t have that problem.

That said, in my brief tests with the One, I didn’t see a huge difference over the iPhone 5 or the current low-light photography king, the Nokia Lumia 920. The photos certainly look good, but you can keep your DSLR (or advanced compact, or ILC).

The HTC One will be available worldwide in late March. In the US, it’ll be on AT&T, T-Mobile, and Sprint–but not Verizon, which is the country’s biggest carrier. Lame. You can snag it in 32GB or 64GB versions, in black or silver. Price hasn’t been announced, but HTC did announce a pretty cool trade-in program–if you sign up on their website before the end of February, you’ll be able to trade in your old phone for about $100. Considering how disastrous phones are for the environment if tossed in the garbage, and how much of a pain they are to dispose of properly, this seems like a pretty great option.