Room temperature to a cool 42 degrees Fahrenheit in 5 minutes 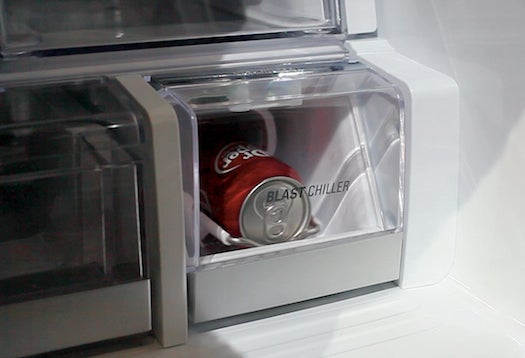 There is 31 cubic feet of space inside LG’s new top-of-the line refrigerator—plenty of room to squeeze in a nifty new blast chiller. Siphoning cold air up from the freezer while gently rocking two beer cans or a bottle of wine, it’ll blast chill a room temperature beverage down to 42 degrees Fahrenheit.

A single can cools to refreshing temperatures in 5 minutes; two cans or a bottle of wine, eight minutes. The contoured cradle will secure anything cylindrical, I would imagine it would be fun to experiment with blast chilling other things. And the LG man on hand said he’d never had a can blow up in his face—it’s in the swirl, not the shake, he says.

I’ve never purchased a refrigerator, but if I did (and I had a couple thousand dollars to spare), it would be this one.