Backing Up is Hard to Do 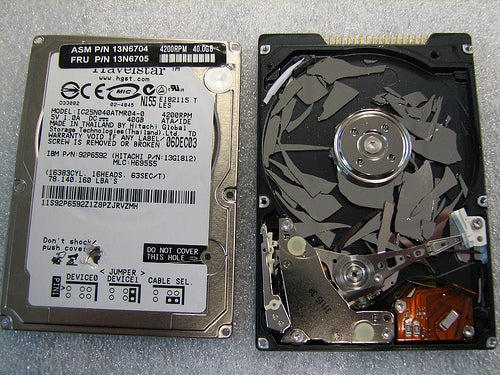 Backing up my computer’s hard drive has always been like flossing: I know I should be doing it even though it’s one of life’s more prickly pains in the butt. Both chores are the kinds of thing you can never fully appreciate until something goes horribly wrong, like a hard drive fries or some teeth start jiggling loose.

It used to be that my entire digital existence could live comfortably on just a few Zip disks (can you believe Iomega actually still makes those?), but with more and more aspects of life being managed on or otherwise facilitated by the PC and Web, a couple of 100MB bricks are no longer sufficient. And it’s not just a few work files I stand to lose if things go bad—I’ve cataloged at least a decade of work, personal projects, photos, bookmarks and professional contacts, not to mention my music collection. Like everyone else that lives and works on a computer nowadays, I’d be absolutely devastated by a data meltdown.

So, I’ve finally wised up and decided to back up my hard drive on a regular basis. But, how? Should I buy a Godzilla-sized hard drive and backup locally, or should I pay a monthly fee to an online service that backs up my data remotely? Each method has its pluses and minuses, so I gave them both a go. Not surprisingly, I can’t say I’m satisfied with either method.

The local half of this experiment began a few months ago when I upgraded to Leopard, which included Apple’s new built-in backup utility Time Machine. I combined that with a 250GB Western Digital USB drive I’d already been using for spotty manual backups whenever I happened to think of doing one. Like everything Apple, the process couldn’t have been easier. Within minutes of upgrading to Leopard, I had full backups of my system running every hour. Time Machine is so easy to use, it has me wondering what took so long for an OS to finally include something like this out of the box.

About three weeks ago, I finally had the chance to actually use a Time Machine backup. A Photoshop file I’d been laboring on for weeks was suddenly and inexplicably corrupt, and unable to be opened. What could have been a fairly catastrophic ordeal was easily fixed when I pulled a fresh copy of the file off of my external drive to replace the corrupted one.

What really enamors me to Time Machine, though, is its ability to fully restore a new hard drive or even a new Mac to my existing configuration. I look forward to trying this out myself when I buy my next computer. But, for now I’m going to skip reformatting my hard drive for a test run and just take the word of others that this feature does actually work.

Time Machine isn’t without problems or shortcomings, however. Its most heinous offense is that it simply stopped working about two weeks ago. After months of successful backups, I now get an error telling me that a backup folder cannot be created. The hard drive is far from full, so what’s going on here? I looked online only to find all sorts of bizarre speculation as to what the problem might be, and every so-called solution seems to involve erasing the drive and starting from scratch. I’d like to avoid doing that, so I called Apple. After making me feel like I’d committed a sin for using a Western Digital drive instead of Apple’s own Time Capsule, the Apple tech wanted to charge me 50 bucks to diagnose the problem. Really? I have to pay Apple to fix its own broken software? Well, I’d like to avoid that, too, so if anyone reading this has had the same problem and figured out the solution, do share.

My other beef with Time Machine and all other local backup utilities is that they’re vulnerable to things like floods, fires, break-ins, spontaneous combustion and whatever other disasters your paranoid mind can fathom. Local backups can help when something goes screwy on your PC, but what if your whole town is blown away by a hurricane?

Having my hard drive backed up on an off-site server definitely calms my nerves. My apartment building could be sucked into a supermassive black hole and I’d still have my data. After my problematic experience with Apple’s Time Machine, I decided to go with a third-party utility instead using the backup component of the company’s famously troubled MobileMe service. There are plenty of options out there, all which do pretty much the same thing and I chose MozyHome since it’s the only one I could find with a Mac client.

Mozy costs $5 a month for unlimited backup space and is a cinch to use. Like my experience with Time Machine, I had my first backup running just minutes after installation. Mozy lets me pick which folders and files I want to back up. It also has nice little feature that groups files together logically for easy backup. So, for instance, I can choose to backup all Microsoft Word docs on my system no matter which folders they reside in. Mozy also encrypts my data while it’s uploading and keeps it encrypted while it lives on Mozy servers. As a test run, I backed up my Desktop, trashed it and then rescued it via my online copy, which restored all 100MB within minutes.

Of course, Mozy has its problems, too. First there were some weird technical glitches. After restoring my Desktop, I was greeted with an error telling me that the process had failed to complete. But, after examining my rescued files one by one, I still can’t tell you what exactly failed. I experienced further weirdness this morning when I awoke to find a backup in progress on files I’d told Mozy not to bother with.

My other gripes with Mozy could be applicable to all online backup services, the most egregious peccadillo being the time it takes to backup and restore. 100MB of my stuff took an hour to backup, while 1GB took 8 hours. I have more than 100GB of data I need looking after, and Mozy tells me that could take days or even weeks to complete. With Time Machine, my initial backup of 100GB took only a few hours.

So, what happens when my laptop runs away from home and I need to restore my data onto a new machine? Am I supposed to wait by my computer for the better part of a month while my files come dripping back in? Mozy_ is_ able mail you your data on DVDs, unfortunately the price of impatience is $29.95 + 50 cents per GB. For me, that would amount to $80 on top of the five I already pay each month, which kind of feels like being kicked while I’m down.

Then, of course, there’s the issue of whether or not my data is ultimately safer on Mozy’s watch. Is it in a fire- and flood-proof facility? Is the server my data resides on flanked by armed guards and vicious attack dogs? Does Mozy claim any ownership over my data once it’s on the company’s servers? And, what happens to my sensitive personal data if Mozy becomes another victim of this end-of-days economic pickle we’re currently in? Having been around during the OG dot-com bust, I can’t say I have a lot of faith in what happens to company computers and servers once said company fires its employees. At the time of this writing, Mozy had not yet responded to these questions.

Ultimately, I found the weaknesses of one backup option to be nicely complimented by the strengths of the other. A local backup is fast and easily accessible, but subject to the dangers of the environment it is in. A remote backup is painfully slow, but at a safer distance from harm’s way. I’m going to stick with Mozy for now, and just think of it as a kind of insurance policy should the unthinkable ever happen to my USB hard drive.

How do you back up – remote, local or both? Got a hard drive stowed away in a safety deposit box? Share your tips! And, seriously, if anyone has a fix for my Time Machine problem, I’m begging for your help.