By adding heat to its nifty, puzzling Air Multiplier bladeless fan, Dyson has found the most naturally useful application for its latest engineering trick 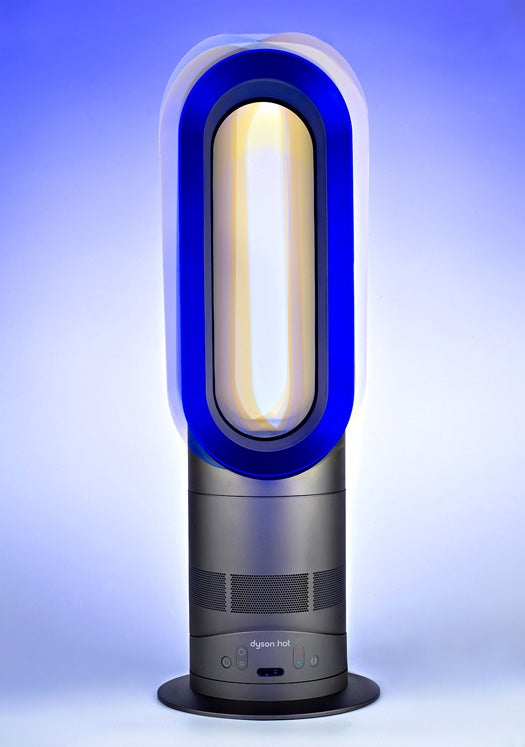 If you’ve seen his vacuum commercials, you know James Dyson loves nothing more than solving a deceptively simple engineering problem. Oh, how it delights him. But when his company introduced its nifty but ultimately confounding Air Multiplier fan last year, it solved a problem suffered by no one: the “uncomfortable buffeting” of air flowing from a common, bladed desktop fan. The engineering involved in shooting air forcefully and smoothly from the Multiplier’s eye-catching ring was impressive, but its reason for being fell flat.

As it turns out, all it takes to turn a good-looking but ultimately strange product into something legitimately, usefully innovative is the addition of hot air. The Dyson Hot—essentially an Air Multiplier fan with a heating element—is proof.

As stated previously, the Hot takes the same turbojet-forced-through-a-window-crack airflow technology found in the original Air Multiplier and adds two traditional ceramic heating elements to the sides of the hoop—hence its comparatively ovoid shape. Of course, you can turn these heating elements off, giving you a useful device for the summertime, too.

With the heat element added, the Hot (a bit awkwardly named, no?) becomes capable of actively changing the climate of a room, as opposed to moving around the air that’s already present. And as it turns out, I have the dubious good fortune to know of an excellent place to test such a thing, even in late summer—inside my absurdly air conditioned office. Due to an unfortunate combination of thermostat and air duct placement, it’s been sweater weather inside my office all summer long. So setting aside the absurdity and wastefulness of combating extreme A/C with a space heater, the Dyson did quite well bringing the temperature of my work space into the habitable zone.

While I’ve not yet had the gall to bring a conventionally fanned (or fanless) electric heater into my office in the middle of summer for comparison (but boy have I considered it), the Hot warmed my approximately eight by eight foot space quickly and easily. Since the heat elements are fully enclosed in ABS plastic and insulation, there is a significantly reduced risk of catching anything on fire (don’t laugh—thousands of house fires annually are caused by space heaters gone awry). Plus—no dust burning smell. All I caught was a subtle initial aroma of warm electronics, which is a smell I quite enjoy. 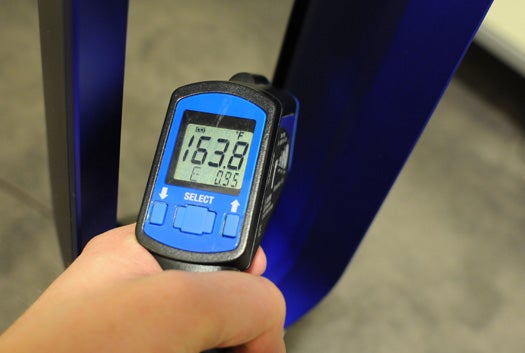 At its hottest point

The heating elements are well insulated, keeping the plastic shell mostly cool to the touch. This was among the higher readings we could find, right at the air aperture’s opening.

Brandishing a trusty infrared spot thermometer, the hottest surface I could pick up was the plastic immediately surrounding the fan ring’s aperture. And the highest reading I found was around 180 degrees Fahrenheit. Certainly very hot to the touch, but you’d have to hold your finger there a long time to suffer a burn. And this was right at the aperture’s opening—the immediately surrounding plastic was much cooler. And readings just about everywhere else on the fan were innocuous—80 to 90 degrees, tops. Just in case, a tilt-sensor shuts the power down if the fan is knocked over.

In operation, the Hot is full of the clever, simple design touches that have become Dyson’s norm. The controls are minimal—a button each for power and rotation, and two-way toggles for thermostat temperature and fan speed are all you see. The fan automatically pauses mid-rotation if you forego the included remote and make an adjustment to its buttons while it’s in motion, waiting a few courteous seconds after your final button press to resume its rotation.

It’s $400, which is mighty pricey for a space heater (at least it’s a fan in warmer months, though). And while heating, it consumes 1500 watts of power—fairly typical for a space heater, but not an area where Dyson chose to innovate here.

Additionally, I found the thermostat to be a bit inconsistent. There were times I felt my office creep back down into the uncomfortably chilly range, and yet the Hot failed to kick back in on its own. Curiously, goosing the temperature gauge up to start the flow of air and then immediately setting it back down to the previous temperature would cause the fan to run for an extended period, making me think it hadn’t kicked back on soon enough. Granted, my clash of two climate control systems is probably not a typical use case, so your mileage may vary.

The Hot seems to be the ideal implementation of Dyson’s bladeless fan tech—so much so that we wondered if the Air Multiplier was just a practice run.

“We launched it in winter,” Dyson told us, speaking of the original heatless Air Multiplier fan. “And we certainly said, ‘This is absolutely mad, we should be doing a heater.’ It’s kind of an obvious extension, being able to circulate the air in a room very well, to not just do it with cold air but to do with hot air. It’s sort of an obvious thing to do.”

After testing, I agree.