A new spin on the classic toy is way cool, and still way hard 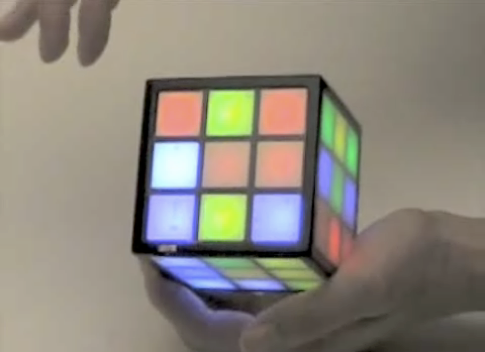 The Toy Industry Association’s annual toy fair had some standout 21st century innovations. Some were creepy, like the Dora the Explorer doll whose hair actually grows when you play an online beauty game. And some were just plain cool. The best thing I got my hands on: A fully electronic version of the classic Rubik’s Cube.

See below for details on the technology, plus exclusive video of one of the two existing prototypes.

Hidden in a darkened black tent in a far corner of the fair — I think by the time I found it I was technically in Jersey — was the Rubik’s TouchCube. Instead of a bunch of interlocking mini-cubes, it’s made up of six LED-lighted touch screens. (The dark room gave it a very disco-floor flare.) You simulate twisting the blocks by sliding your finger along a row of squares in the direction you want them to turn. An accelerometer inside determines which side is facing up (i.e., which one you’re looking at), and desensitizes the other five so you don’t accidentally make a move with the hand you’re holding it in.

The folks at Techno Source, who distribute Rubik’s products, brought the prototype to PopSci’s office for us to play with. The TouchCube is powered by seven chips, one for each side to control the squares’ colors, plus one mother chip that keeps the rest in sync, ensuring that if you swipe a row of green-red-yellow row to the right, you get green-red-yellow around the corner. Every square contains three LEDs, one each of red, green, and blue, which light up at different intensities to produce a square’s color (the familiar white, orange, yellow, green, red, or blue of the old-school stickers). It comes with a display stand/charging dock for juicing the battery.

The TouchCube is endowed with internal memory, so it remembers every move you make from the start of the game. Center squares double as function buttons, including “undo” to step back your moves in reverse order. Or if you really get stuck, you can press another button to get a hint, or another to watch the puzzle solve itself. Gives you a different sense of satisfaction than getting frustrated and chucking the darn thing across the room. Of course, at this price point — 150 smackers — you don’t want to be tossing it around.