SWITCH60 Review: The First Liquid-Cooled LED Bulb Will Light Up Your House Like Edison

But it will lighten your wallet, too 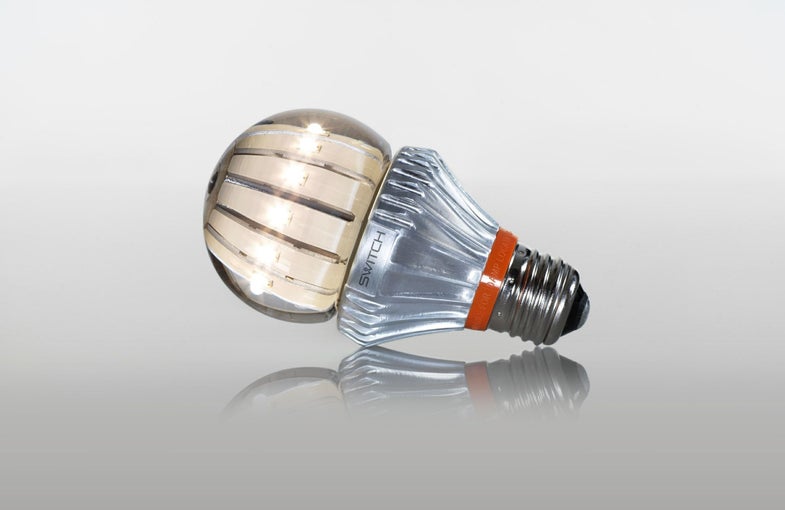 The ice cream cone-shaped fluorescent light bulb was supposed to be the lamp of the future, producing just as much light as the century-old Edison incandescent at a fraction of the energy. But CFLs look terrible, enveloping rooms in an unfriendly bluish hue. LED lamps are the next future of lighting, but they have their own obstacles to overcome, including sensitive electronics that can burn out when they get warm. SWITCH, the first liquid-cooled light bulb, aims to solve that issue and light up your house with the comfortable yellow glow of the incandescent.

Right out of the box, the SWITCH60 feels impressive, like a Cadillac version of a regular bulb. It has the globed shape of the 60-watts I used to buy before switching to CFLs, but it’s way, way heavier — the weight is the first indication that it’s a piece of technology, not just a thin piece of glass you screw into a lamp and forget. On my kitchen scale, it weighed in at 9.8 ounces, about as much as a typical volleyball.

The weight is behind this bulb’s secret — it’s full of liquid silicone, which dissipates heat from the 10 LEDs (12 LEDs for the 100-watt version). Warmer silicone moves toward the glass exterior, where heat dissipates into the air; as it cools, the silicone drops back toward the bulb’s heart. Think of a lava lamp; this works basically the same way, said Dave Horn, chief technology officer at SWITCH. You just can’t see the gloopy circulation.

The bulb also contains a volume-compensation device that works somewhat like a piston to keep the bulb at atmospheric pressure. If the bulb breaks, it won’t explode. Plus, liquid silicone is food-safe and clear, so if you drop one and it breaks, your carpet won’t stain and your dog won’t get sick. This is a benefit over the mercury vapor-filled CFL, which can emit harmful mercury if it shatters.

I replaced a CFL with the SWITCH60 in an upright light fixture in a room with white walls and a white ceiling, and the room filled with a comforting yellowish glow, which I thought was distinctly different from the cool blue hue of the one it replaced. Another major benefit: It was 100 percent bright immediately. No waiting for the vapors to fully warm up and fluoresce, which is one of the more annoying aspects of a CFL.

Other LED lamps emit light around 3,000 degrees Kelvin, a measure of color temperature, which is more toward the bluish end of the spectrum. It turns out that more energy is required to get to 2,700 K, around the color temperature of an incandescent bulb. SWITCH bulbs can take the heat this extra electricity generates, Horn said.

This is because of the phosphor blend used to produce that color, he said. “To get that redder look, the phosphor peak is very wide. Some of that red pulls into the infrared, and that’s why the efficiency drops.” The bulbs use a bit more power than others on the market, but the team decided it was worth it to achieve the proper glow. The 60-watt equivalent uses 12 watts, while the 100-watt equivalent uses 21 watts.

The price tag. The 60-watt version will set you back $40, and the brighter ones go for $60. The weight may also be troubling to some. It would feel weird in a cheaper lamp with a clamp-on shade, like you’d be injuring it. Horn said the weight is a common question and is “duly noted.” “In the next generation lamps, we’re looking at reducing that weight tremendously,” he said. The bulbs aren’t on sale yet, but they were shipped earlier this month to hotels and other hospitality establishments, so you may start seeing them soon.

If you miss the sun-like glow of the old Edison bulbs and care about energy savings — and price is not an issue — then this bulb is for you. It works well, looks great and does exactly as advertised. Compared to other LED options, the SWITCH bulb may be a better investment, because the liquid coolant will help direct heat away from the drivers, prolonging their life. It’ll pay for itself, eventually; SWITCH says with 80 percent energy savings, that’ll happen at around six months. But at the end of the day, it’s worth more than many of the light fixtures into which it will be screwed–and whether it’s worth it will vary by person.