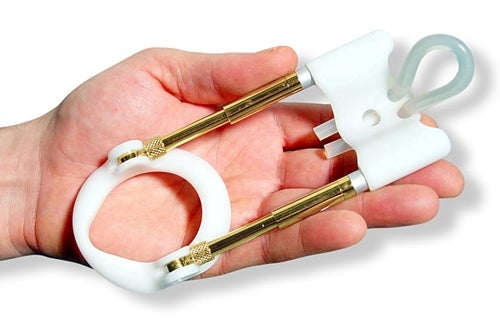 Is it the size of the wave or the motion of the ocean? That debate may never be settled, but a new study out of Italy suggests penile extender claims may not be as “short” on truth as widely assumed. Not something that concerns you, Mr. Well-Endowed? Well, considering the average American’s erectile length (5 inches) is well shy of the French (6.2 inches), Germans (5.6 inches), Italians (5.9 inches), Mexicans (5.8 inches), Chileans (5.5 inches) and Columbians (5.4 inches), consider it a matter of national pride.

The study, published in the March issue of the British Journal of Urology International, focused on a commonly marketed brand of penile extender, the macho sounding Andro-Penis. The device (note to readers– clicking through that link will bring you top a rather realistically-rendered instructional image) is composed of a plastic ring connected by two dynamic metal shafts, a plastic support and a silicone band that holds the gland, or head, in place. Men who took part in the study wore the device for an average of five hours in the first month, five hours in the third month and four hours in the sixth month. And chances are none of them tried to pass through airport security with it.

Most test subjects suffered from a condition know as dysmorphia, or an excessive dislike of a body part. And although not published in the report, there’s a high probability a few of these men were South Korean (3.7 inches). Others took part in the study after having undergone surgery for curvature of the shaft, which reduced the size of their unit. 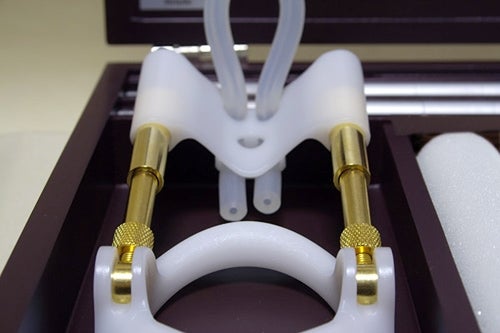 Will the $300 Andro-Penis increase the average worldwide penile length above the 5.5 inch mark? Well, until the crapola economy improves all you little guys might have to focus more on the motion of the ocean.