A new technique could bring us closer to accurately predicting volcano behavior. 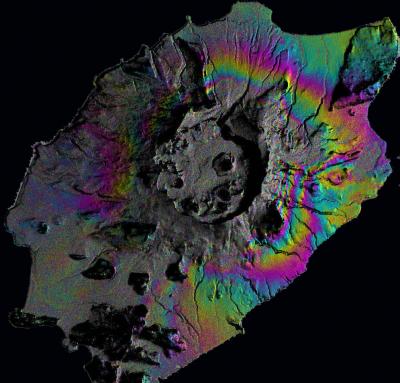 Satellite data from Okmuk volcano in Alaska shows how much the ground was deformed after an eruption. Courtesy of the Institut des Sciences de la Terre (ISTerre).
SHARE

Those are just some of the challenges volcanologists face when trying to accurately predict volcanic eruptions in the same way we frequently forecast storms. But as intense as those challenges are, the widespread ubiquity of GPS technology and other remote-sensing tech has made them more surmountable today than they were decades ago.

In a study published Wednesday in Frontiers in Earth Science Mary Grace Bato, a volcanology PhD student at the Institut des Sciences de la Terre (ISTerre) in France, and colleagues detailed how weather forecasting techniques can be applied to volcanic eruptions, potentially setting the stage for volcano forecasts to show up alongside weather reports in places like Alaska or Iceland.

Currently, many volcanoes around the world are monitored for signs of activity (though some of these programs are set to have their funding cut). Monitoring can help cities, towns, and residents prepare for an eruption, and can save lives when monitoring stations detect that an eruption may be imminent. Evacuations by local governments ahead of the 1991 eruption of Pinatubo saved over 5,000 lives, for instance.

But real-time volcano monitoring is still not nearly as robust as weather forecasting. “We can look at a volcano and monitor it,” Bato says, “But we don’t have the capability to forecast the long term or short term evolution of the volcano.”

This is where GPS comes in. Satellites can now track movements in the ground, and the position of the ground over time. This is important because the vast reservoirs of magma under a volcano are nearly impossible to directly observe, and have to be monitored based on the movements they cause on the Earth’s surface.

To envision a magma reservoir, Bato says you should “think of a balloon under the volcano, where the air is the magma.”

As that ‘balloon’ inflates with magma rushing into the reservoir, it pushes against the overlying layers of rock and soil. “Using real GPS data, we can see the volcano is inflating,” Bato says.

That’s one of the signs that an eruption might be imminent. In this new study, Bato and her colleagues showed that by combining GPS data from satellites with an existing model of how a volcano functions, and applying applying weather forecasting techniques—also called data assimilation—they could predict what situations would lead to an eruption.

That’s similar to how meteorologists take real-time data and measurements from around the world and combine them with weather models to predict the track of a storm or a heat wave.

While weather models are fairly robust—though there are still disagreements about which one is better—volcanology models are in much earlier stages of development, and a model that applies to a volcano in Hawaii won’t necessarily apply to a volcano in Indonesia or Russia.

But Bato’s technique is flexible. “The good thing about this technique is that you can change the model that you use. You can plug it in depending on what is appropriate for the volcano you want to observe,” Bato says. All that’s required is that the model has a temporal element that takes into account how the volcano behaves over time.

So far, the technique has only been applied to simulations, but Bato and colleagues are currently testing their method at Iceland’s Grimsvotn volcano, which had a noticeable eruption in 2011, and Okmok, an Alaskan volcano.

Bato hopes that as volcanic eruption models become more robust, volcano forecasting might become more common, eventually helping people and communities living in the shadow of volcanoes be better prepared for the hazards they face. “It’s a long road to get there, but it’s a great beginning,” Bato says.