Life And Death During Blizzards

We dig into two myths about how snowstorms affect human health 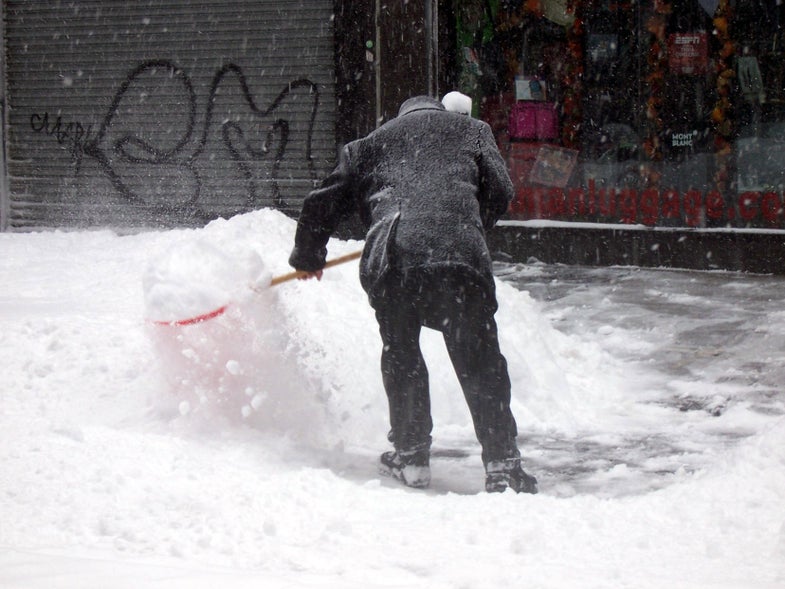 So there are a couple of—let’s say, health outcomes—that are popularly associated with unusual snowfall. One is heart attacks: It’s commonly believed that shoveling snow can over-strain the heart. The other is pregnancy: Couples stuck indoors, it’s thought, may find themselves in a certain mood.

Is either effect real? Let’s take a look at the evidence.

Do People Have More Heart Attacks During Blizzards?

The deaths don’t just stem from heart problems. Elderly or other vulnerable folks, who can’t afford to keep their houses properly warmed, may worsen any conditions they already have. And chronic obstructive pulmonary disease often worsens in the winter because people get colds and other infections on top of their COPD.

Meanwhile, the heart problems associated with wintertime likely have something to do with shoveling. In every community and every year, exactly how much snow-shoveling contributes to heart attacks varies, but it’s been shown pretty repeatedly.

One study of the Minneapolis-St. Paul area found up to 14 percent of heart-related deaths could be linked to snow (although the same study found no association between snow and heart deaths for three winters out of five). Another study, which analyzed records from nine Rhode Island hospitals after the “Blizzard of 1978,” found increased numbers of heart-attack patients three to five days after the blizzard. That storm deposited as much as 50 inches of snow in 24 hours. One classic study, published in 1979, found an 88 percent increase in risk for sudden death from a heart problem among men younger than 65, following heavy snowfall.

Those at risk for heart problems with shoveling tend to be those who have heart-disease risk factors and who are not normally active. Snow shoveling isn’t necessarily more stressful to the heart than a good aerobic workout at the gym. For those whose aren’t used to such activity, however, it can be dangerous. The American Heart Association has tips for shoveling safely.

Are Blizzard Babies A Real Thing?

Although it makes for a fun story, there’s no reason to believe people are more likely to conceive during blizzards. Point number one: If a couple are already using birth control, why would they decide to stop during a blizzard? Point number two: Any number of events may make people feel sexy, including Valentine’s Day, other severe weather, really nice weather, sports wins, Fifty Shades of Grey… Pretty soon, what you have is a series of natural fluctuations in the birthrate that probably reflects, well, different strokes for different folks.

A couple of local newspapers have had fun with this one. Check out reporting by the Chicago Tribune and the Seattle Times.

Stay safe and have fun out there.