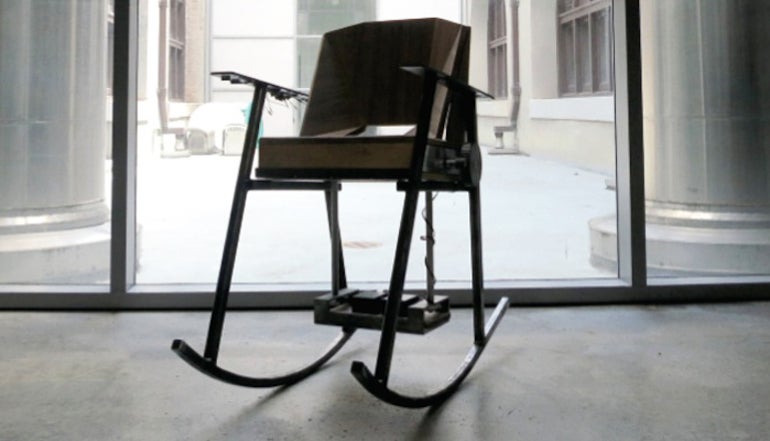 A team of four undergraduates from UC Berkeley has created a rocking chair that generates energy while you rock.

The chair, called Volta, is equipped with a pendulum under the seat that moves as the sitter rocks back and forth. The motion of the pendulum generates energy that gets stored in batteries. That power can be used to give extra juice to electronics like phones and tablets.

Originally, the team just wanted the power generated by the chair to be a novelty. People visiting the chair could rock and compare how much energy they generated through an app. But that didn’t pan out.

“Ultimately what ended up happening was people would keep saying, ‘Hey, where’s the plug to charge my phone?'” Jessica Chiu, one of the members of the team said in a release. So they added a USB port, allowing people to charge up while they relaxed and recharged.

Unfortunately, you won’t be seeing these at a furniture store near you any time soon. It’s heavy, at nearly 80 pounds, and the students have no current plans to bring it to market.

Other electrifying rocking chair options ran into the same issue. The Murikami Rocking chair, which generated electricity to power a light was too costly to go into full production. Another product, the iRock debuted in 2012 and was going to cost $1,700 but doesn’t appear to be on the market (their website has disappeared).

While we wait for the dream of many to become a reality, we’ll just have to settle for a charging station shaped like a table. It’s a start.