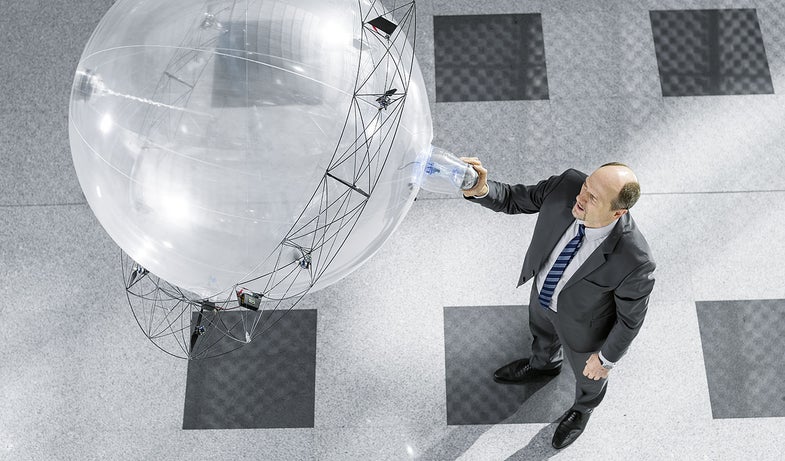 The orb descended from the heavens, before extending a soft, fluid-filled proboscis onto the head of its victim. Hovering, it swallowed whole the tasty morsel, cradling it inside its body as it floated over to a waiting human. Floating nearby, it then disgorged the contents of its transparent stomach into the human’s outstretched hand. It isn’t flying saucers we should fear — it’s flying spheres.

Made by German industrial design firm Festo, the hovering sphere is catchily named “FreeMotionHandling“, and Festo bills it as an “indoor flying object.”

It has, in the words of Festo itself, “combined gripping and flying in a single future concept”, which is broadly horrifying. The sphere is ringed with a light carbon frame, containing 8 rotors that can go either horizontal for forward thrust or vertical for hovering. The orb is filled with helium, for buoyancy in the air, and it’s guided by indoor GPS and cameras. (We last saw these same systems guiding Festo’s altogether less unsettling robot butterflies). Most importantly, it is real.

The practical applications for an orb that can grip are likely many, but my mind goes straight to Rover, an orb used to collect lawbreakers in the cult 1960s British television show The Prisoner

So far, Festo’s orb seems like it only works indoors, and in specially prepared environments at that, and it’s far too small to carry a person. But that’s logically where this goes, right? Giant orbs, roaming the countryside, gobbling up humans.