Tanzawaic Acid: A New Weapon In The Fight Against Antibiotic Resistance 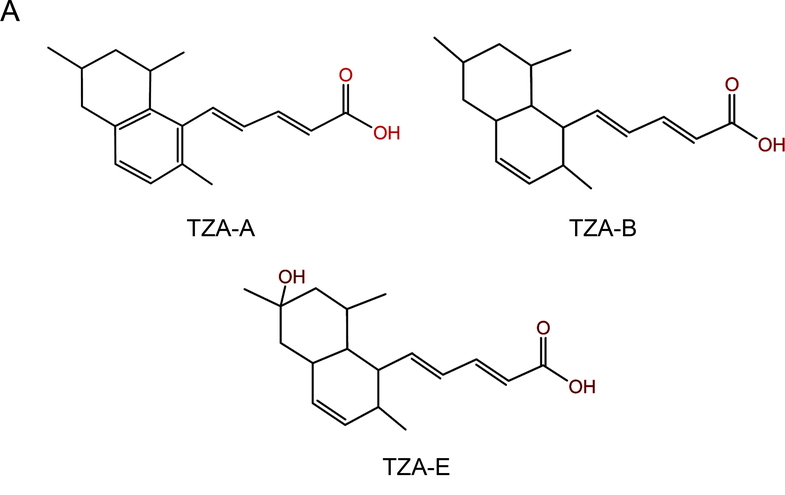 Controlling the spread of antibiotic resistance is a global priority. Curbing the use of antimicrobials through stewardship in medicine and abstinence in agriculture are the most effective means. Yet even this is not enough to entirely stop the trend as bacteria are continually sharing these genes allowing more species to develop resistant behavior.

The process is known as bacterial conjugation and as the name implies, involves the merging of two bacterial cells allowing for transfer of genetic material. In most cases, the genes are found on plasmids, which are not part of the genome but rather separate entities capable of producing a variety of proteins. Plasmid exchange can happen between bacteria of the same species and in some cases, two different species.

Conjugation occurs in all environments and as a result, is extremely difficult to control. Certain chemicals, such as the antibiotic nalidixic acid and the naturally occurring fatty acid linoleic acid have shown promise in helping to slow the down transfer but they have not been used to any great extent for this purpose. There are concerns regarding toxicity and dilution in relevant settings such as the gastrointestinal tract.

Now that may change thanks to a recent study by a group of Spanish researchers. Last week, they revealed certain members of a group of chemicals known as tanzawaic acids, may inhibit bacterial conjugation. Moreover, they may one day be used in natural environments to help keep the spread to a minimum.

Tanzawaic acids were first isolated in 1997 from the fungus Penicillium citrinum and in 2000 from the species Penicillum steckii. By 2014, there were a dozen different forms of the acids known to exist in these species. In the last year, they were examined for antioxidant and anti-inflammatory activity with promising results. Although not all versions of the chemical were effective, there was enough reason to examine those with potential including as possible antimicrobial agents.

For the authors of this study, there was little expectation. The study was initially designed as a screen of bioactive compounds in order to identify anything that might halt conjugation. The process was straightforward in design. Natural extracts from a variety of marine microbes including fungi and algae were first taken from a previously designed collection. These were then introduced into a bacterial system involving two conjugating strains of Escherichia coli. If conjugation was prevented, the chemical was then examined further to determine its structure.

A total of 1,632 extracts were tested out of which only a few of the extracts seemed to have any promise. When these were further analyzed to determine which chemicals may be responsible for the inhibition, two of the tanzawaic acids, A and B, showed up. The experiments were then repeated using only these acids and sure enough, the results were replicated.

Once these acids were isolated, the authors wanted to determine if this activity was specific to these two versions or if other tanzawaic acids could also prevent conjugation. To do this, the team used another one of the acid types, E, to put the theory to the test. But, in this case, there was no inhibition.

Because of the similarity between all the tanzawaic acids, the group wanted to investigate the mechanism further. To do this, they examined the molecular mechanism of inhibition. Much to their surprise, the activity was very similar to that of linoleic acid. The chemicals interfere with a necessary step in which the membranes of the two bacterial cells pair allowing for transfer of the plasmid.

While the news appeared to be all good, there was still one hurdle to overcome: toxicity. If the acids were toxic to cells in effective concentrations, the work would inevitably be worthless. Thankfully, they were able to show at least one of the acids, B, could inhibit activity at non-toxic levels. This suggested they may be useful in helping to reduce the levels of resistance transfer in the body particularly during antibiotic treatment.