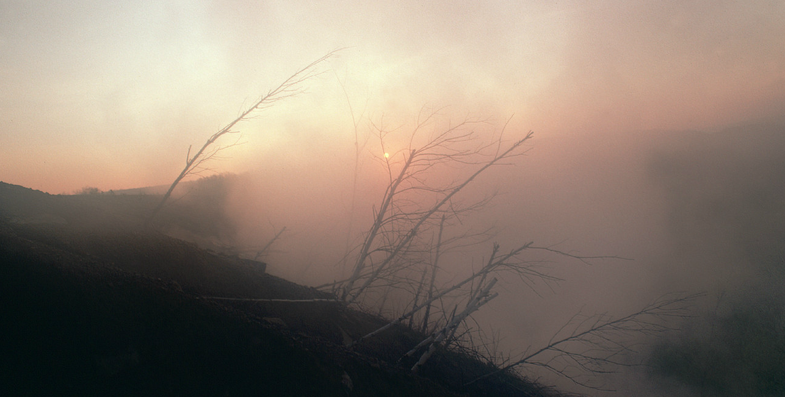 May 27, 1962, was an ordinary spring Sunday in the rolling green hills of Centralia, Pennsylvania. The roughly 1,000 residents of the small coal-mining town went about their usual Sunday routines, looking forward to tomorrow’s Memorial Day festivities.

To get the town ready, officials had ordered the removal of the huge pile of trash sitting in the town dump. The easiest method available was to set it all on fire. Burning trash remains a common (but mostly illegal) way of getting rid of garbage, especially in rural areas without a robust waste infrastructure. Certainly in 1962, months before the publication of Silent Spring and years before the environmental movement really took off, burning waste was much more common than it is today.

There was just one problem. The fire that started that day never went out, and the town began a long, smoldering decline into oblivion.

Centralia’s landfill was located on top of an old coal mine, which, like many abandoned coal mines, still had plenty of coal inside it. As the fire devoured the garbage that day, it found its way to the forgotten seams of coal, and latched onto them, burning slowly and steadily, releasing soot, heat, and deadly carbon monoxide.

Coal burns easily and releases huge amounts of heat as it combusts, making it perfect to heat homes or power electrical plants. Coal is found all over the world, and it is cheap. But the same properties that makes it so valuable also make it dangerous.

The people of Centralia tried to put the fire out. Firefighters pumped water onto the underground flames, and tried to smother them with clay, but they kept popping up, like a hellish trick birthday candle. For the next 16 years, there were half-hearted efforts to put out the fire from the state and federal government, but nothing worked.

Some residents reported losing consciousness while sitting in their homes, as carbon monoxide began seeping up from the ground and into the town’s buildings. The mine closed in August 1962 — filled with carbon monoxide, sulfur dioxide, hydrogen sulfide, and methane — but people still lived in the houses above it. In the years that followed, sinkholes and cracks began to appear around town, opening into abandoned mining tunnels. On the surface, heat, steam and smoke seeped up from below, an eerie landscape that inspired the popular video game series Silent Hill. 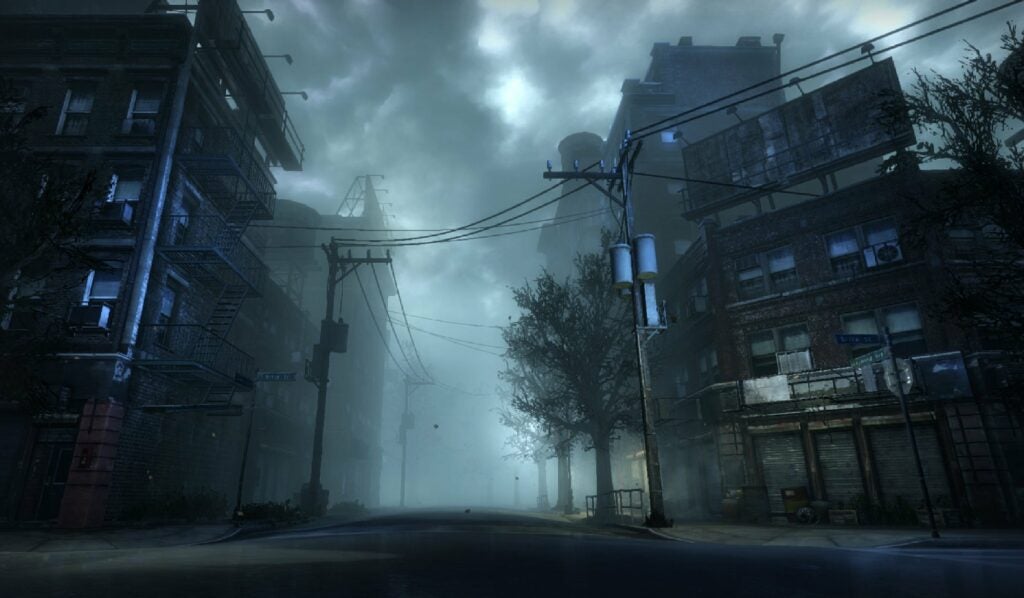 A still from Silent Hill: Downpour, a video game that takes its inspiration from Centralia.

After the carbon monoxide levels continued to rise–and a 12-year-old boy fell into a burning sinkhole in the early 1980s–efforts to extinguish the fire redoubled. The authorities pumped water underground. They put clay over the surface to prevent oxygen from sustaining the flames. They pumped a slurry of fly ash (ash from coal-burning fire plants), water, and rocks into the abandoned mine. Nothing worked.

The goal of all these methods was to put out the fire, either by walling it off and preventing it from spreading or cutting off all supplies of oxygen, but within a few years it had gotten too large and spread out, capable of drawing from any number of places the scant amount of oxygen it needed. A coal fire can burn in an atmosphere that’s just 1 or 2 percent oxygen. By comparison, the air we breathe typically has 21 percent oxygen.

Glenn Stracher is a professor at East Georgia State College, who has been studying the Centralia site and coal fires around the world since the 90s.

Faced with the impossible task of putting out a fire that would not die, in 1983 Congress allocated $42 million dollars to relocate the residents of the town, buying up their homes and houses, and then demolishing the structures, leaving the land to smoulder. Today, the town is abandoned, undone by the very material that kept it afloat: coal.

Down In The Mine

“I hope when I’m gone and the ages shall roll,
My body will blacken and turn into coal,
I’ll look down from the door of my heavenly home,
And pity the miner diggin’ my bones.” –Merle Travis

The perfect conditions for the formation of coal are a highly forested or vegetated area with waterlogged ground. As the plants die and their remains sink into the sodden soil, the huge volume of dead vegetation just sits. Microorganisms that would normally break down the remains can’t survive under the water. As a result, the mass of leaves and trunks and stems doesn’t decompose like the piles of leaves you see in the fall, but continues to build up over time. Eventually, it gets covered by soil and other vegetation and buried deep in the earth, where the weight compresses it into the hard, carbon-rich material that we mine today.

Twenty-five states in the U.S. mine that compressed vegetable matter. Pennsylvania alone produces 5 percent of the country’s coal. But it’s the quality, not the quantity, of the Pennsylvania coal that matters. Pennsylvania specializes in anthracite, the hardest form of coal, a shiny black substance with a very high concentration of carbon.

Its high carbon content means that it can burn for longer, with less soot and with more heat than other types of coal. That’s unfortunate for Centralia, whose anthracite has been burning for over 50 years.

But while coal proved to be that town’s undoing, our society’s reliance on coal has a much more far-reaching impact on climate. Burning of coal releases sulfur and nitrogen, creating smog and acid rain, as well as toxic carbon monoxide, and carbon dioxide, a potent greenhouse gas that is responsible for global warming. Scrubbers and filters in power plants take out many of coal’s worst pollutants when it’s burned, but carbon dioxide still pours into the air.

In China, the only country that produces and consumes more coal than the United States, constant burning of coal, with limited filtration, is responsible for smog that clogs lungs and obscures skylines.

Governments around the world are trying to cut back. In China, government reforms cracking down on coal have led to a sharp decrease in the amount of coal used. And the Environmental Protection Agency has announced new regulations to cut down on the amount of carbon dioxide produced by the energy industry by 25 percent by the year 2030.

How much the coal-powered superpowers on both sides of the Pacific can reduce coal use, only time will tell. There are some technical solutions to help them along. Scientists are looking into carbon capture techniques that will make burning cheap coal less costly for the environment. Carbon capture technologies come in many different forms but all have the same goal; take the carbon that would otherwise go into the atmosphere and put it somewhere else, preferably back in the ground, where it won’t contribute to climate change. The first ‘clean’ coal plant opened in Canada last fall at a staggering cost of over one billion dollars. Making the existing technology more efficient and less costly in the future could help more coal-fired power plants adopt the technology.

Meanwhile, renewable resources, like wind, water, solar and geothermal power, are gradually cutting into coal’s slice of the energy pie.

In Centralia, the ground is no longer as hot, as the fire has moved deeper into the earth, away from the surface, but it is still going, along with other coal fires around the world. There are coal fires burning on every continent except Antarctica, and the oldest, in Australia, is nearly 6,000 years old.

Centralia’s fire won’t be burning for that long, with experts estimating that it will go out completely in 50 to 250 years, but people are still keeping an eye on it. One of them is Timothy Alteres, who works for the Pennsylvania Department of Environmental Protection’s Bureau of Abandoned Mine Reclamation, and works to repair the scars (and burns) left by centuries of mining in the state.

Over the years, people like Alteres mapped out the extent of the fire and believe that eventually it will be contained. Either it will venture so deep that there would be no more air or coal to consume, or it will head out laterally, into areas where over 200 years of mining have stripped away all traces of coal, a firebreak inadvertently built by our forebears.

Alteres says that about 400 acres of Centralia have burned so far. There are still toxic gases, and the danger of sinkholes, but the heat has dissipated from the soil and smoke isn’t as frequent as it was in the 1960s and ’70s.

The Bureau has been proactive when it comes to the 30+ other mine fires burning in the state. In the past 5 years, Alteres estimates that his group has put out 6 to 8 fires, usually by figuring out where the fire is, then digging or blasting out a trench in front of it and removing any coal that the fire could latch onto.

“Digging it out is the best way. [Then] it can just be sealed and left to burn itself out,” Alteres said.

Today in Centralia only a few structures are left, with dead-end streets branching off from a main street that is still traversed by commuters each day as they go from their homes to their workplaces, but never stop in town.

The most famous part of Centralia might be the three-quarter-mile section of Route 61 that passes near the outskirts of town, which was abandoned in 1993 when parts of it started sinking beyond repair. Today, despite the state’s discouragement, it is a popular destination for adventure seekers. If you drive along Route 61 today between Mount Carmel and Ashland, the detour will take you through the very center of what used to be Centralia.

In satellite images, Centralia looks like a planned suburban development, with neatly laid out streets lined by vacant lots, all of it covered with vegetation. It’s a town with no houses, just waiting, it seems, for someone to sweep in with blueprints and hammers and get to work. But despite the verdant facade, rebuilding is highly unlikely.

Deep in the earth, the Centralia fire rages on. The flames have decades of fuel left to eat through.