Why Is There A Hurricane In January? 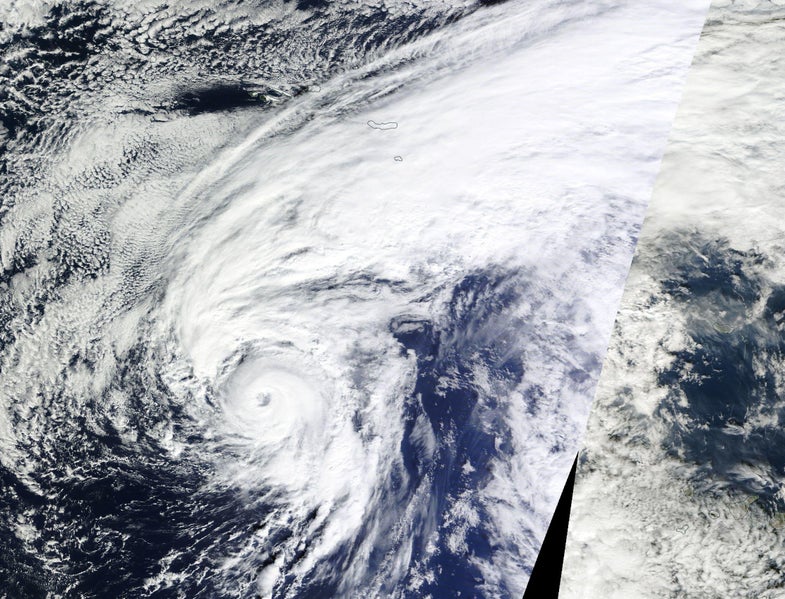 It’s starting off as a wild, wet, and windy year. Alex, the first named tropical storm of 2016 made landfall on the Azores islands in the North Atlantic at 9:15 AM local time on Friday, January 15. Luckily, Alex had been downgraded from its peak status as a hurricane by the time it hit land, though it was expected to deliver waves of up to 60 feet high and gusts up 100 mph.

A storm like this hasn’t happened in the Atlantic—not in January—in decades. That’s prompted a lot of scientific debate, including speculation that this weird weather is related to El Niño, or maybe climate change, or maybe both.

But hold on to your hats and your Weather Channel panic. In reality, Alex is just one of those weather flukes. While warmer waters, triggered by climate change, may have aided in Alex’s formation, a single out-of-season storm does not foretell our future Januaries. Nor is it even a harbinger for the 2016 hurricane season, which isn’t expected to start until June.

How did Hurricane Alex form?

A cold front swept through the southeastern United States last week and stalled out over the Atlantic. An area of low pressure developed along that front, growing into a tropical storm, and then—powered by the difference between the temperature in the air and the temperature of the water—into a hurricane. “Nobody’s used to that in January,” Feltgen says. That’s because the waters are usually too cold, and the wind shear (that’s the difference in wind speed between different layers of the atmosphere) is too strong for hurricanes to develop at this time of year. As it is, sea surface temperatures around Alex are only marginally able to support it, and it is quickly losing intensity.

Has this happened before?

Yes, says Feltgen: “Hurricanes can form outside of the season. They have in the past and they will continue to do so.”

But the last time it happened in January, Franklin Roosevelt was president and Orson Wells was scaring the heck out of America with his War of the Worlds. That was 1938, way before researchers had satellites, high-tech hurricane chasing planes, or even a naming system. ‘Hurricane 1’, as it was named, formed as a storm on New Year’s Day, working its way up to a full-blown hurricane by January 5. Sailors on ships caught in the storm took windspeed, temperature, and pressure measurements. One ship noted wind speeds of 50 knots, or 57 miles per hour. Based on that and other measurements, the storm’s peak intensity was later estimated to be 80 miles per hour, which helped scientists later classify this storm as a hurricane.

While Hurricane 1 was the only hurricane prior to Alex, to start in January, other storms have overflowed into this month from December. Hurricane Alice formed on December 30, 1954 and raged into January. Tropical storm Zeta perplexed forecasters in December 2005, strengthening into January, and defying all predictions of when it would weaken and disappear. Other January tropical storms have taken place in 1951 and 1978 as well.

But all of these are exceptions to a pretty robust rule. Since meteorologists began keeping records in 1851, Feltgen says 97 percent of all tropical storms and hurricanes have formed within the typical six-month hurricane season: June 1 to November 30th.

What does this mean for 2016’s Hurricane Season?

Just because Alex made an early appearance doesn’t mean we can draw any conclusions about this year’s hurricane season. It will still start on June 1, just like Hurricane season always does. Researchers probably won’t even make predictions about the severity of this year’s season until at least May. That’s because forecasters won’t have the information they need to make them. They’ll need to know what the temperature of the Atlantic ocean will be in different places and whether the El Niño pattern will remain strong into 2016.

El Niño is currently drenching California with rain. During the 2015 hurricane season El Niño is believed to be responsible for an unusually small number of hurricanes in the Atlantic, as well as an unusually large number of hurricanes in the Pacific. If it remains strong going into this upcoming hurricane season, there’s a chance the Atlantic will stay quiet. But no one can predict that with certainty.

What about the future of hurricanes in general?

While Alex hasn’t been linked to climate change (yet–future analysis might show that it is), that doesn’t mean climate change won’t affect storms in the future.

It’s very difficult to predict how increased temperatures—in both air and sea—will affect future storm formation. Currently, some scientists think we may see fewer tropical storms, but those storms may be more intense. In addition, sea level rise is making coastal cities more vulnerable to storm surges. Researchers are continuing to look into links between hurricanes and climate, using all kinds of new technology including a facility that can actually make hurricanes in a lab.

And the beauty is, they can make them any month they want—just like Mother Nature.