Hurricane Joaquin Is A Category 4 Storm Strengthening Over Bahamas 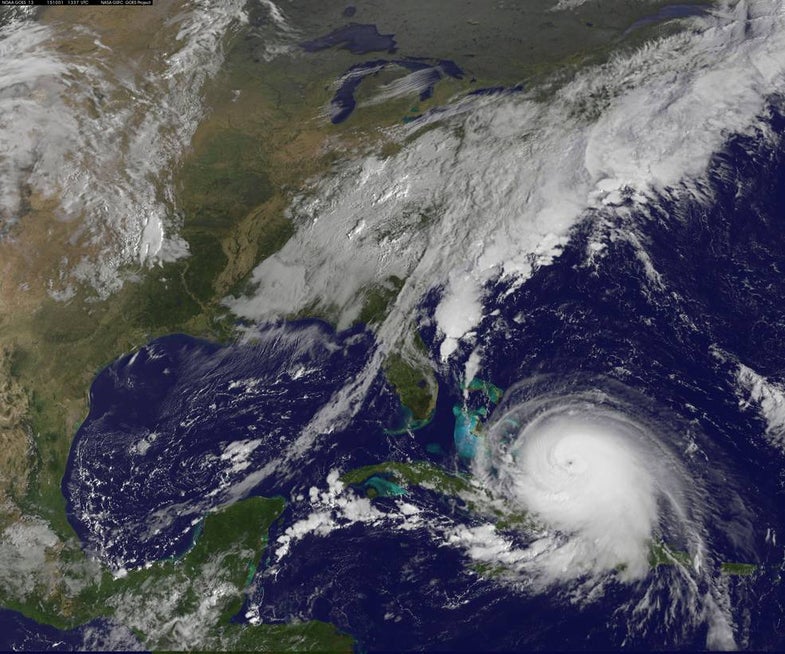 The warm waters of the Bahamas are the prefect place to rest, recuperate, and get your strength back—especially if you happen to be a hurricane.

Scientists and meteorologists have had their eye on Hurricane Joaquin for the past few days as the storm evolved from a tropical depression, to a tropical storm, and finally, last night to a Category 3 hurricane, with winds of up to 120 miles per hour. Many were worried that windspeed would increase to the point where the storm became a Category 4 hurricane, the second-strongest type of storm on the widely-used Saffir-Simpson Hurricane Wind Scale.

And that’s exactly what happened. NOAA’s latest public advisory on the storm at 2 PM announced that wind speed had increased to 130 miles per hour, moving up to Category 4.

Joaquin is expected to continue strengthening over the next day, battering the Bahamas, before turning north, and heading for…somewhere. The exact path of the storm remains mysterious, with some models seeing it headed towards the Carolinas in 3 days, others predicting that it will hit Long Island and New England in 5 days, and others predicting it will head for Bermuda. In the discussion section of the public advisory, NOAA forecasters noted at 11 am that “Confidence remains very low in the eventual track of Joaquin and any potential impacts for the United States, and further adjustments to the NHC track may be needed later today.” At 2 PM they added that “A hurricane watch for the U.S. coast would likely not occur until at least Friday morning.”

According to the National Hurricane Center, this graphic “shows an approximate representation of coastal areas under a hurricane warning (red), hurricane watch (pink), tropical storm warning (blue) and tropical storm watch (yellow).” However, as the NHC is clear to also point out: “NHC tropical cyclone forecast tracks can be in error,” so this map shouldn’t be read as definitive, or even necessarily accurate once new information is gathered about the storm.

Hurricanes are divided into five categories on the Saffir-Simpson Hurricane Wind Scale. The scale goes from the weakest, a Category 1 hurricane (sustained winds between 75 and 95 miles per hour) and the strongest Category 5 hurricane, with sustained winds of 157 miles per hour or above. A Category 4 hurricane has winds between 130-156 mph, and is considered a major storm. (For perspective, Hurricane Katrina made landfall as a Category 3 storm.)

NOAA says that if a Category 4 hurricane makes landfall:

Though the storm’s exact path remains uncertain, governments along the East Coast are marshaling their resources, preparing for the worst. Virginia and New Jersey already declared a state of emergency:

Even if Joaquin veers back out to sea, or weakens in the days ahead the National Hurricane Center is warning areas along the East Coast to brace for coastal flooding.

If Joaquin did hit land in the United States as a Category 3 hurricane or larger, it would be the first landfall of such a large storm in 9 years. The United States has been in a hurricane drought since 2005—despite the recent destruction Hurricane Sandy caused on the East Coast in Fall 2012—and everyone was kind of hoping it would stay that way. But nature could see otherwise.