Head in the clouds? Then it's time to make yourself a useful citizen scientist. 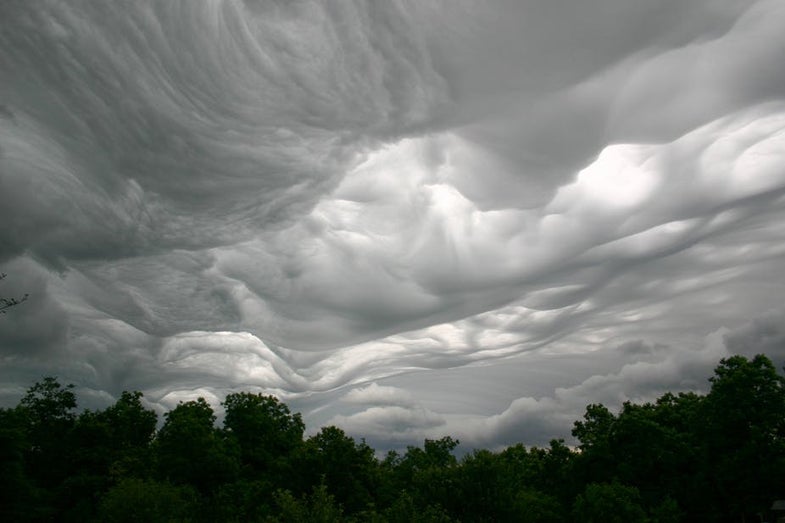 Clouds form in a multitude of different shapes and sizes, their infinite combinations and position across the sky offering a visual drama in response to the light conditions. But despite their apparent randomness, a detailed naming convention is in place to categorize them. When a cloud ultimately can’t be fitted into one of the many existing categories, it can be nominated for a classification of its own. In 2017, the World Meteorological Organisation (WMO) added 12 new types of cloud to the International Cloud Atlas, the world standard guide for cloud classification. And I worked as part of a small team investigating the science behind one newly categorised cloud, Asperitas, which exhibits wave-like perturbations, reminiscent of a rough sea in the base of the cloud.

Clouds are named using a Latin-based system proposed by Luke Howard in 1803, which laid the foundations for the WMO cloud atlas in 1939. Clouds are separated into ten basic genera, which are shown in the image below, and are described by their shape and altitude.

For example, Cumulus, from the Latin for heaped or puffed, describes clouds with a “cotton wool” appearance. Stratus describes a low-level layer cloud with a uniform, even base that covers much of the sky. Nimbus means rain-bearing, so a cloud called Nimbostratus is a layer cloud that produces rain or, sometimes, snow.

Beyond the basic types provided by the genera, clouds may be sub-categorised into several species and varieties which, in turn, can also exhibit supplementary features. This leads to very precise descriptions of the clouds. For example, in the diagram below there are four Cumulus clouds: a) is Cumulus humilis, which is a species of cumulus having a short vertical extent; b) is Cumulus radiatus, a variety of cumulus arranged into lines across the sky; c) and d) are both Cumulus congestus species formed due to deep convection. However, d) has a layer cloud at the top, called Pileus, which is a further supplementary feature.

The WMO cloud atlas has only been updated three times in its 79 years, in 1975, 1987 and, most recently, 2017. Consequently, it is rare to have a new cloud recognized. Why, then, is it important to make additions?

Clouds provide an indication of the current state of the atmosphere and cloud type is reported by weather observers worldwide. Atmospheric observatories have long-term weather data for at least 100 years, which are important for learning about changes in our climate. Therefore, having a thorough and up-to-date identification system for clouds is important in describing weather and climate.

These rare updates occur for two principal reasons. First, some of the newly classified clouds, such as Cirrus homogenitus (meaning manmade cirrus), known commonly as contrails, have only been present since the age of the airliner. These additions to the cloud atlas, then, show human effects on the atmosphere.

Second, with the advent of smartphone technology, the opportunities for the public to observe and share pictures of cloud formations has rapidly increased. The Cloud Appreciation Society (CAS) has a cloud spotting app that lets its members upload pictures of clouds, which also have location data attached. This is a form of citizen science. It means that new cloud formations are now more likely to be reported than ever before. Campaigning by CAS founder, Gavin Prator-Pinney, led to Asperitas’ recognition as a supplementary feature in the latest WMO cloud atlas.

In my work at the University of Reading’s Department of Meteorology, the atmospheric conditions surrounding the CAS app sightings of Asperitas were investigated using satellite imagery, laser cloud recorders, and weather forecasting models. Through this we found that Asperitas was a supplementary feature of a Stratus or Stratocumulus cloud.

The wavelike formation observed in the cloud base was found to be associated with atmospheric waves being channelled along the cloud base. These waves are a result of atmospheric motion and the effect of gravity, and are known as atmospheric gravity waves (not to be confused with gravitational waves). They function like ripples of water passing over the surface of a still lake, but instead pass through the atmosphere.

They are often generated by thunderstorms, jet streams, and the passage of air over mountains. The interaction of the gravity wave along the cloud base gives Asperitas its wave-like features. Our paper fully describing this is available here.

Asperitas provides an excellent example of how citizen science can be used to make scientific discoveries. Our millions of smartphones are micro-measurement devices that can record the sky. Combined, they give an unprecedented atmospheric measurement system. So next time you’re out and about and spot a cloud you’ve never seen before, snap a picture and see if you can find it in the WMO cloud atlas.

You might just have witnessed a new cloud formation.

Graeme Marlton is a Postdoctoral Researcher at the University of Reading. This article was originally featured on The Conversation.