We need a greener way to die

Most of us will keep polluting post-mortem. 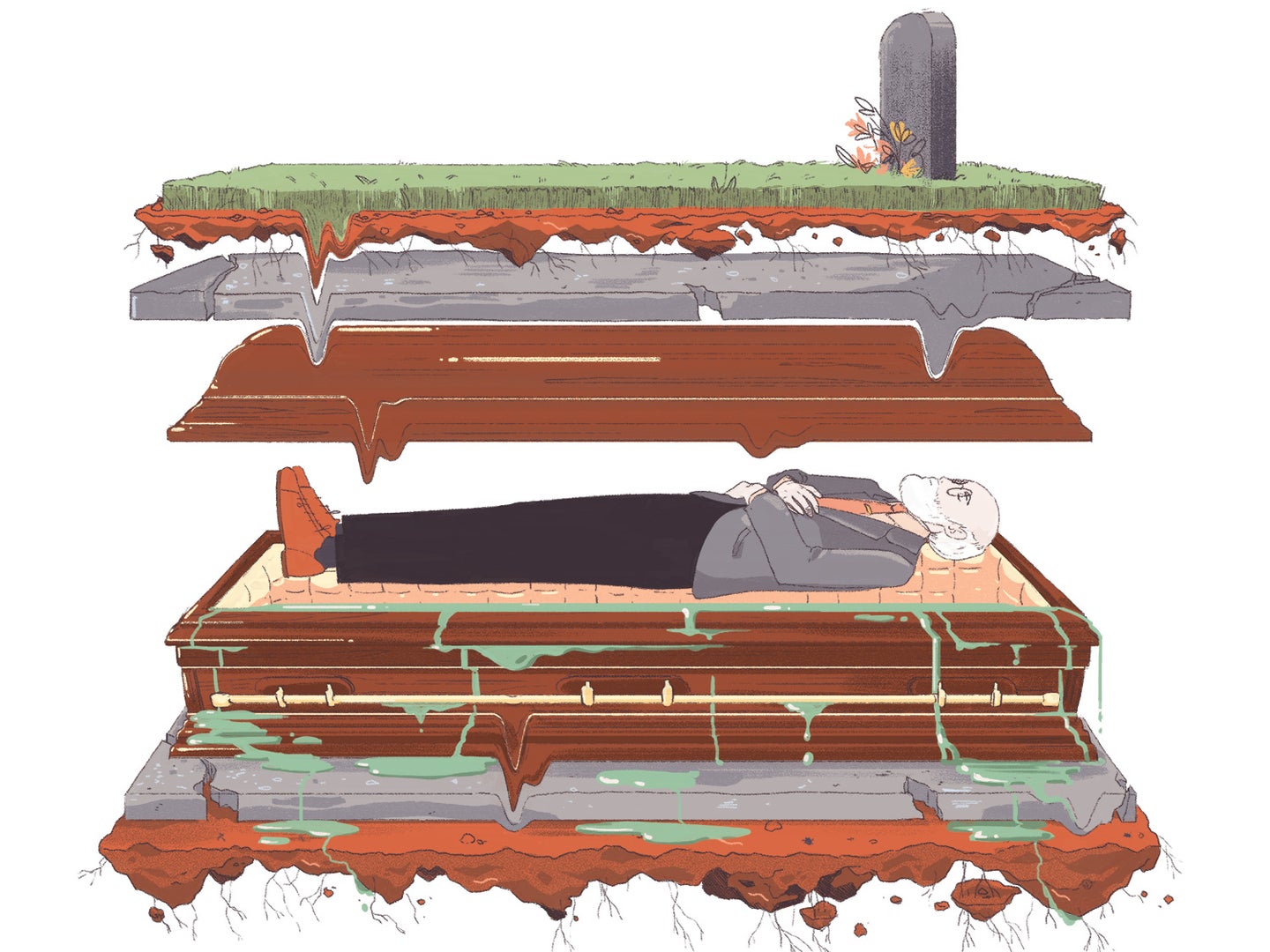 Death might be life’s natural and unavoidable conclusion, but humans have ensured that what happens to our bodies afterward is anything but. For more than a century, the circle of life in the United States has looked more like a horseshoe, with burial practices preventing the Earth from reusing our precious raw materials after we shuffle off this mortal coil. But there are alternatives, and a growing number of future corpses might rot as nature intended.

Embalming may be our worst offender. The practice of filling bodies with chemicals like formaldehyde to preserve them dates back to ancient Egypt, but it caught on stateside in the mid-1800s as a way to transport fallen Civil War soldiers. Today, U.S. morticians embalm roughly 1 million people every year. It takes between 3 and 4 gallons of chemicals to preserve the average body. That’s a lot of carcinogens to leave floating around for the sake of the dead.

The ripple effects are numerous and nasty. Conserved corpses can go on display in caskets that, collectively, use tons of wood and steel, which we then bury in concrete containers. Instead of returning bodily nutrients, like potassium and calcium, to the ground, we slowly molder while shielded from the dirt. Lack of oxygen causes wasting flesh to release methane, a greenhouse gas more potent than the carbon dioxide we’d produce in open air. Meanwhile, embalming fluid can leak into soil and make its way into our groundwater, potentially at hazardous concentrations. Our final contribution to humankind: toxic ooze.

Many countries favor an option lighter on chemicals: cremation. It’s also becoming popular in the U.S. According to Phil Olson, an associate professor at Virginia Tech who studies death, this corresponds with shifts in cultural feelings on mortality. Most no longer consider the whole, physical body necessary for grieving, which results in less pressure to embalm. “People respond to changing social conditions,” he says. We now cremate around half of our bodies. If the trend continues, that number will be 79.1 percent by 2035.

But despite its apparent minimalism, cremation is resource-intensive too. It takes around 28 gallons of fuel to turn one person into ash. Of course, it doesn’t require the same watering and mowing as a burial site, which keeps its total carbon footprint about 10 percent lower than embalming and burying.

Americans are starting to seek options that minimize the environmental impact of their afterlives. More than 70 percent of U.S. cemeteries say they’ve seen increased demand for so-called green funerals. Such services might use nontoxic embalming fluid (essential oils instead of formaldehyde) or put bodies in the ground as is. Some religious groups have always done so: Judaism and Islam, for example, traditionally eschew embalming.

Organizations like Washington’s Urban Death Project are pushing local legislation to add more postmortem options, as many state laws currently require traditional burials or cremations of some kind. One alternative: laying bodies in sawdust-filled vessels to reduce them into compost. Washington became the first state to legalize the process on May 21. Each person turned into plant food in lieu of the usual treatment saves about a metric ton of carbon dioxide, according to the Urban Death Project’s own assessment. This might be more palatable to Americans than, say, rituals like Tibetan sky burial, which deposits bodies to decompose on mountaintops.

Leaving our dead for scavengers probably isn’t the next big trend, but we’re coming around to the idea that the greenest way to die is to encourage decomposition, not stop it.