A dry region became a wetland largely through human intervention. 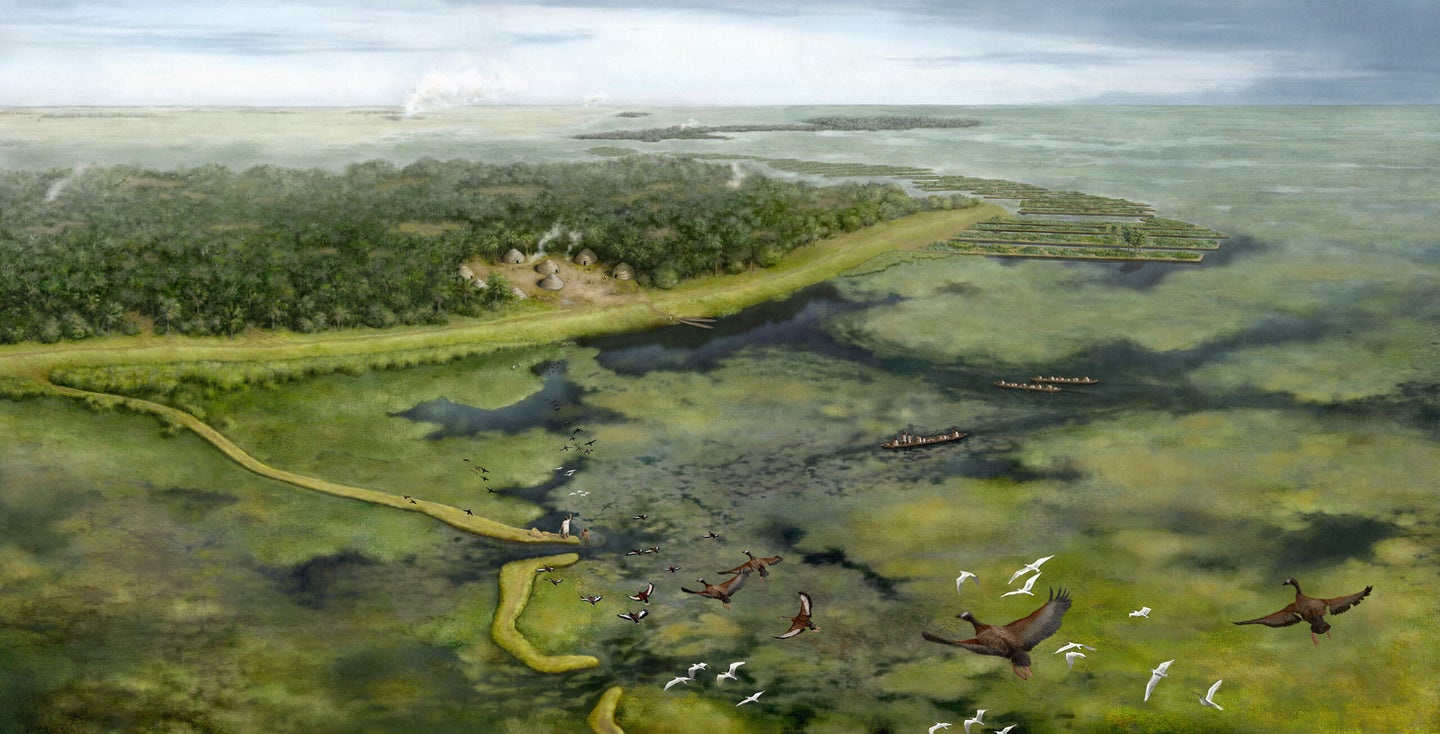 In the southern edge of the Amazon basin lies a huge grassland, the Llano de Mojos. It’s something in between dry land and water, carved up by rivers and swamps, the entire landscape floods every year during the wet season. But in spite of the power of those waters, new research suggests that the key features of the landscape, from its plants to its floods, were shaped more by humans than the geography, or even the climate.

“What is the Amazon?” says John Walker, an archaeologist at the University of Central Florida. “It’s not just one thing.”

It’s long been clear that the landscape was made by humans, says Walker, who has worked in the region for decades and was an author on the recent study, published in the journal PNAS.

There are three key human structures in the Mojos: long, narrow fields that stick out of the floodplain just a handful of centimeters, fish traps that cut across waterways, and “forest islands” that loom over the flat horizon. Three quarters of those forest islands—which were likely built out of the flat plain by humans—contain unambiguous signs of human habitation, from the remains of fires to ditches and ceramics.

The researchers set out to understand how that landscape had transformed over time.

They took soil cores from two sites in the swamp about 13 miles apart. In each of them, the soil showed the same story: thousands of years ago, the region was relatively dry. Then, traces of wetland plants and aquatic microorganisms showed that regular floods had occurred on the landscape, as they do today. At the same time as the floods, charcoal fragments began to appear. When the fire was most intense, the soil contained traces of crops like corn, squash, and sweet potato.

But that progression happened at different times at the two sites. At one, fire and floods began 6,000 years ago. At the other, those became dominant 1,500 years later. And that suggests to the researchers that the landscape was transformed into a swamp not because of increased rainfall, but because of human management.

“This is really weird,” says Walker. “It’s very difficult to imagine a climate explanation or some kind of geographic explanation. To me, the obvious suspect is all these artificial earthworks that are everywhere.”

The research is the latest in a body of work that suggests that even the “wildest” ecosystems on the planet, like the Australian outback and the Amazon basin, are not the product of untouched nature, but of human cultivation. And often that cultivation has gone on for thousands of years longer than scientists have recognized.

In the case of the Mojos, the researchers believe that the high ground of the forest islands may have been inhabited since at least 8,900 BCE. That’s in line with other research that argues the region was a hub of early agriculture, and may have even been a domestication hotspot on par with the Ganges, Mediterranean, and Papua New Guinea.

When most people think “what is the Amazon,” Walker says, “It’s Nature with a capital N. It’s something that has to exist in the universe because it’s a contrast to culture or the city, or something like that… I think that idea is sometimes more influential than what we really know about the Amazon.”

The Mojos region is now mostly cattle ranches. And the study suggests that those cattle have also shaped the landscape: before they were introduced in the 1600s, the plains were full of shrubs and trees, a bit like Africa’s Serengeti.

Still, Walker cautions, it’s not easy to know how to interpret the earthworks. The first European accounts of the region describe people fishing in the area’s shallow waters, but the existing indigenous society was quickly destroyed by colonization and disease, and many of the landscapes were abandoned or converted to ranchland. Pollen from the soil cores show that the forest islands grew back over with heavy tree cover at that time. (The entire Amazon basin experienced such a catastrophic population collapse that the regrowth of the continent’s forests led to a dramatic dip in global carbon.) The forest islands show clear signs of human use, while the fields look like agricultural land, but without firsthand accounts it would be a step too far to think of them as villages and farms.

[Related: Humans are pushing into animals’ homes, but nature is as rebellious as ever]

“I’m scared of the European-farming-style bucket,” Walker says. “I’m less interested in saying, ‘okay, [the inhabitants] were on this island and nowhere else.’ Those islands might have been useful even when people weren’t living on them.”

For one thing, the islands support plants and animals in surprising ways. While excavating, the team found a burrowing fish living in the mud at the bottom of a ditch on the island. “That’s just to hammer home the point that the things people did are affecting plants and animals today. Those forest islands are great places for all kinds of animals.”

Walker makes the point that pre colonization societies may have farmed, hunted, and fished in ways that wouldn’t be obvious to Europeans. And even if people don’t actively inhabit the forest islands anymore, Walker says that his local research partners who grew up in the area “have all kinds of knowledge of plants and animals and historical changes” at the sites. On one cattle ranch, he remembers, one partner knew that there was a howler monkey living on a forest island alongside several dozen workers.

“The interplay between what we think of as nature, and the people living there, is complicated. And it’s probably been complicated for thousands of years.”