A new tool to help save the Great Plains 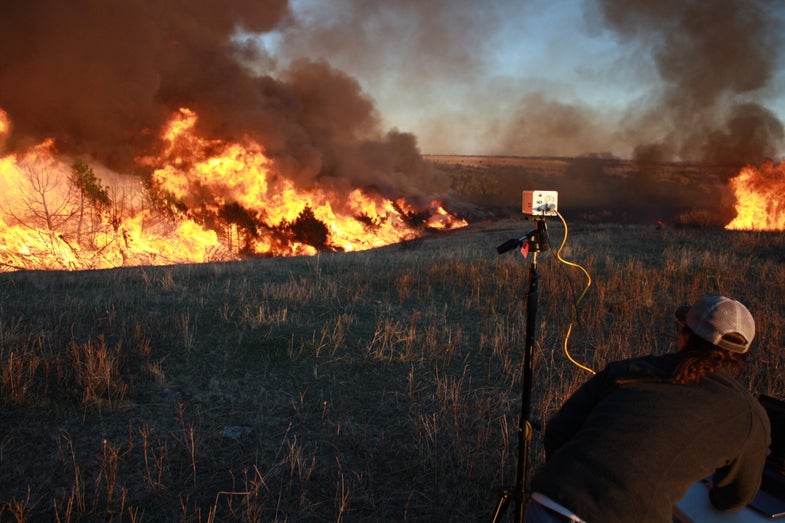 The Great Plains of the American West are becoming a great sea of shrubs—and wimpy manmade fires are at the heart of the problem. That’s according to ecologist Dirac Twidwell, who believes controlled burns simply aren’t hot enough to control the woody shrubs that are taking over the prairies.

What’s needed are “extreme fires,” meaning fires that burn hot and are erratic and nonlinear in their movement, Twidwell wrote in a paper published in the journal Frontiers in Ecology and the Environment. And to help manage these extreme fires, Twidwell and a team of engineers from the University of Nebraska have created drones that can start extreme fires from the sky, a prototype of which we previously covered.

“Nobody is really studying high intensity fire, because everyone would think you are crazy,” Twidwell said in a press release. That’s because high intensity controlled burns are considered too dangerous, he says, though they more closely mimic the natural fire conditions that shaped the ecology of the Great Plains.

In the past, lightening regularly ignited fires in the plains, killing off tree seedlings and shrubs, and promoting the growth of fire-adapted grasses. But decades of fire-control by humans has altered that natural process, allowing woody shrubs to prosper and overtake the grassland. This is a problem for ranchers hoping to maintain quality grazing land for cattle and for wildlife managers seeking to maintain the native ecosystem. The low-intensity controlled burns they’ve employed have inhibited large-scale wild fires by restricting potential fuel, but in doing so have facilitated the march of the shrubs, which can survive low heat fires.

“If we are going to understand the role of fire in nature, we need to study a bigger range of intensities, and we need new approaches to do it,” Twidwell continued. “New approaches” such as drones that drop fire from the sky.

The idea for the fire drones started as a joke between Twidwell and co-author Craig Allen, a researcher with the U.S. Geological Survey. But they quickly realized it had real potential. Twidwell worked with a team of engineers at the University of Nebraska’s NIMBUS Lab to develop drones that deploy ping-pong-ball-sized “dragon eggs” loaded with fire-starting chemicals to ignite controlled fires. They’re safe and cheap, Twidwell says, taking on a dangerous job normally carried out by range crews and helicopter pilots.

This video shows how the two-pound hexacopters load, arm, and deploy the fire-igniting “dragon eggs”:

Twidwell and his team carried out two field tests with the drones in Nebraska with promising results. Ultimately, he believes that drones can play significant roles in controlled extreme burns, both in precision igniting and monitoring. In the paper, the authors describe a future in which swarms of drones conduct fire suppression and management operations, bringing down both costs and risk to human lives.

As for the grasslands of the Great Plains, Twidwell’s research has shown that extreme fires can destroy tough-to-kill shrubs that are transforming the landscape. Perhaps fire-starting drones will play a role in the restoration of the West’s iconic prairies.