A cessna, not a drone, brought the panopticon to Charm City 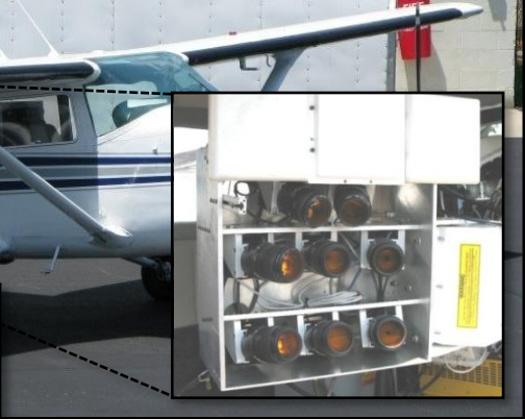 When it comes to the sky, there is no privacy. There hasn’t been, really, since 1989, when the Supreme Court ruled in Florida v. Riley that a helicopter flying above 400 feet didn’t need a warrant for what it saw from above. Police surveillance existed before Florida v. Riley, and it’s taken many forms since. New police drones may have snagged headlines, but it’s a much more inconspicuous plane that’s done much of the work. The cover story in the next issue of Bloomberg Businessweek is all about persistent surveillance over Baltimore, and the humble Cessna planes that do it.

How exactly was this possible? First, the technology. Cessnas are pretty basic planes, often small, two-or-four seater propeller driven aircraft. They’re cheap, common, and can operate from smaller runways, making them a common craft among hobby pilots. Turning one into a surveillance system mostly means sticking on a bunch of cameras.

Popular Science described the Persistent Surveillance Systems HAWKEYE II camera system in 2014, noting that unlike a Predator drone’s high magnification camera, the HAWKEYE II “uses 12 off-the-shelf Canon cameras, mounted in an array to capture a huge swath of terrain. The array is carried by a commercial plane, which flies at an altitude of between 8,000 and 10,000 feet. The resolution of the final image is less than that from a single camera, but because the HAWKEYE can see such a large area for so long, the composite reveals something new instead: movement.”

Where people move about in public isn’t exactly private information, as it happens in plain view, but it’s certainly revealing, personal information. And it used to be hard to track, because watching a large swath of a city and everyone’s movements in it was beyond the cameras of the time. The Persistent Surveillance System changes that, by combining a cheap airplane with easily available cameras and the software to process what these cameras can see.

The end result is that Baltimore got a first glimpse of our modern world: it’s impossible to hide in plane view.

Read the full story at Bloomberg.