The envelope in which HIV keeps its genetic material gets an unprecedentedly detailed look. 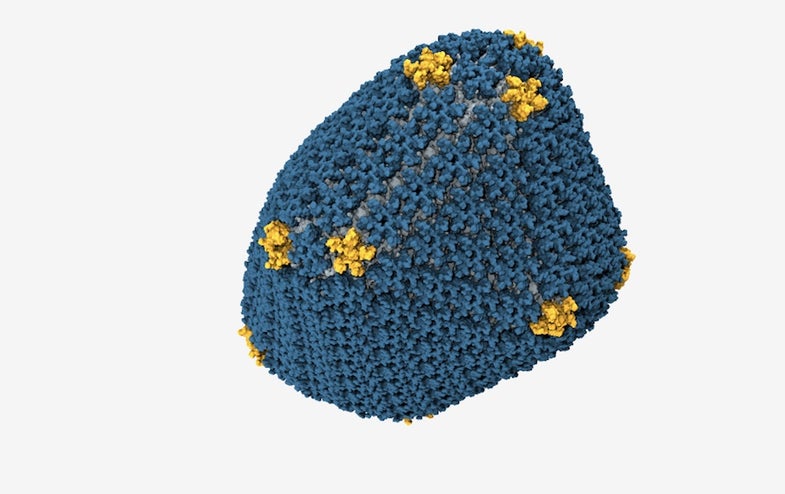 The human immunodeficiency virus’ capsid is both a shield and an open backdoor. Located in the center of every HIV particle, the capsid protects the virus’ load of genetic material. Once the virus has entered a human cell, the capsid is programmed to come apart in an orderly way, kicking off the virus’ takeover of the cell.

Yet the capsid may be vulnerable to certain drugs, which researchers are now studying as potential treatments. (No current HIV drugs target the capsid.) “The timing of the opening of the capsid is essential for the degree of virulence of the virus,” Klaus Schulten, a physicist at the University of Illinois, said in a statement. “This is where we could perhaps best interfere with HIV infection.”

Schulten was part of a team that has, for the first time, modeled the HIV capsid’s structure at the atomic level. Scientists already knew a lot about the proteins that form the HIV capsid, but hadn’t been able to learn details such as exactly how many proteins make up the capsid until now. The new model requires an enormous amount of computing power, which wasn’t available until recently; simulations of all 64 million atoms in the capsid ran in the University of Illinois’ Blue Waters supercomputer, which can sustain 1-petaflop performance during calculations.

Shulten and his team, including biologists, physicists and disease researchers from several U.S. universities, hope their model will help others design drugs that mess with the capsid somehow.

The researchers discovered that the capsid is mostly composed of 216 hexagon-shaped proteins fitted neatly next to one another like cells in a honeycomb. Meanwhile, 12 strategically placed pentagon-shaped proteins create sharp corners in the capsid, forming it into a narrow cone. Previous studies had suggested that those pentagons made the capsid’s corners, but this study helped confirm that’s true.

The team also ran some simulations that showed what kind of disruptions to the capsid’s structure make it unable to form correctly or reproduce at a high rate. 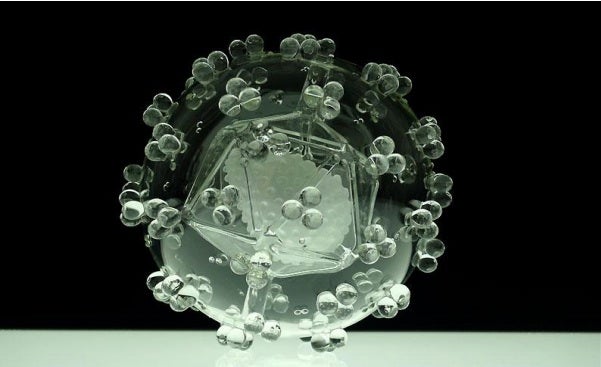 The capsid is the frosted glass cone in the middle.

To check their model, the team compared their results with data about the HIV capsid that they and other scientists had previously discovered, including information about the capsid’s distinctive shape. The model fits well with already available data, the modelers wrote in a paper they published today in the journal Nature.

There’s something very cool about getting to see, so accurately, something that’s so small it can’t even have color—viruses are much smaller than the wavelengths of light. For some, however, seeing the structure of HIV may be especially potent. Luke Jerram is an artist in the U.K. who makes glass sculptures of microbes. He’s made an HIV particle before, and received this letter from an anonymous fan in 2009:

Dear Luke,
I just saw a photo of your glass sculpture of HIV.
I can’t stop looking at it. Knowing that millions of those guys are in me, and will be a part of me for the rest of my life. Your sculpture, even as a photo, has made HIV much more real for me than any photo or illustration I’ve ever seen. It’s a very odd feeling seeing my enemy, and the eventual likely cause of my death, and finding it so beautiful.
Thankyou.