And create a law-abiding cloned version of wayward citizens 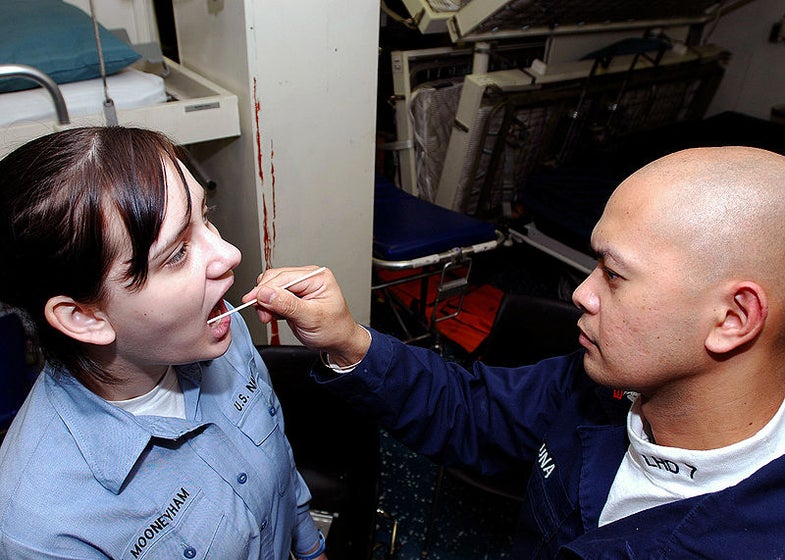 The US Supreme Court ruled today on the case of Maryland v. King, deciding with a 5-4 majority to uphold the Maryland state law that considers a DNA test–in this case a cheek swab–to be a legal search. That DNA will be entered into a database to be matched with existing samples.

The concept of a legal search is one of the toughest concepts in law to get your head around; it extends to much more than a search of your home or car or school locker. Your body, legally speaking, counts as your property, and you are entitled to legal protection against the violation of its bounds–which can be manifested as what we think of as privacy. That could mean what you say in the privacy of your own home, which is why wiretapping is illegal, or it could mean the right to not submit to questioning unless there is probably cause.

The case in question involved one Alonzo King, Jr., who was arrested in 2009 on an assault charge. He was fingerprinted and a DNA test was administered–but the DNA result linked him to an unsolved rape from 2003. King was sentenced to life in prison on charges from the 2003 rape, but appealed all the way to the Supreme Court on the grounds that the DNA test constituted an illegal search, violating the Fourth Amendment.

The Supreme Court decision was heated. Justice Antonin Scalia, who normally sides with the conservative bloc on the Court, instead sided with the liberal bloc, and Justice Stephen Breyer did the reverse. Scalia felt so strongly that the DNA test was an illegal search, in violation of the Fourth Amendment, that he read his dissent from the bench, something only done when the author is particularly outraged.

Justice Anthony M. Kennedy, writing for the majority, calls the DNA test “a legitimate police booking procedure.” And the Court also noted that the DNA test is fairly non-invasive, that it involves no surgery. And that’s true! But it’s important to analyze why things like fingerprinting or photographing are police booking procedure: it’s exclusively for identification. DNA tests are worthless for identification; they are only used to match one sample against another. That makes them valuable for solving older cases, but entirely unnecessary as a standard booking procedure. As a matter of protocol, DNA results are entered into a database, and automatically checked against it for matches, which is what happened in the King case.

The other issue for the future is who, exactly, can now legally be DNA-tested. The answer? Anyone who has been arrested for any reason, valid or not. A racist cop who pulls over a guy driving a car in Arizona because he looks Latino? That guy can now have his DNA taken and booked on file, even when he’s released in an hour with no charges filed.

From the dissent of Justice Scalia (who, it should be noted, has been a fiercely aggressive justice on the subject of privacy as of late): “Today’s judgment will, to be sure, have the beneficial effect of solving more crimes. Then again, so would the taking of DNA samples from anyone who flies on an airplane.” Of course, not everyone agrees.

Read more over at MSNBC.