How to connect a soundbar to a TV: HDMI ARC vs optical

Connecting a soundbar to a TV can take only one or two cables, but have you asking questions like HDMI ARC vs optical. Here are answers. 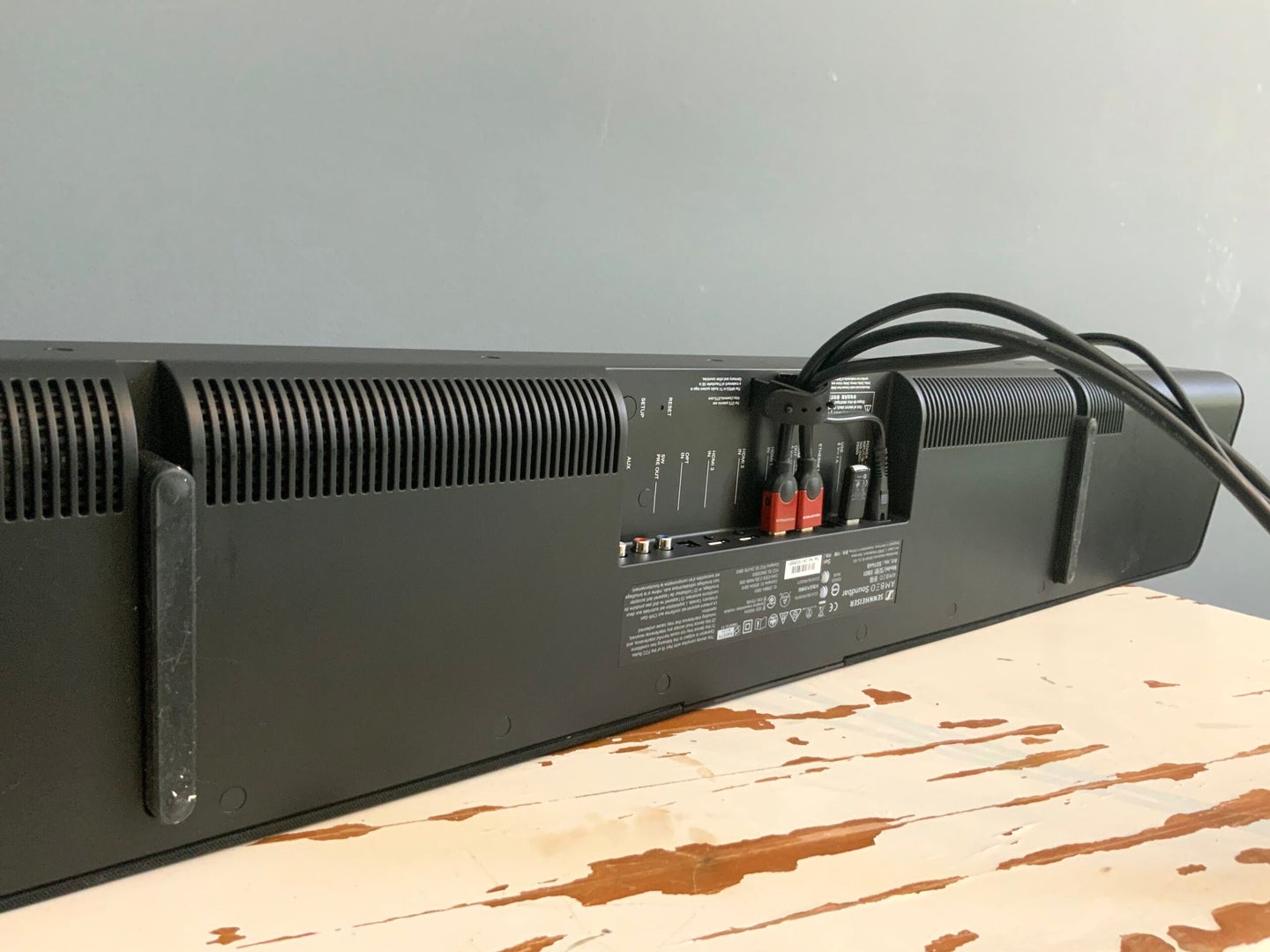 The Sennheiser AMBEO soundbar's underbelly hides its ports panel, including ones for HDMI and optical. Markkus Rovito
SHARE

While the picture quality of the best TVs seems to improve year over year, the internal speakers of these increasingly slim, stunning panels don’t really do those vivid images justice … which is why you want to connect a soundbar. And it’s no surprise that soundbars, which can supplement those tinny tones with almost movie theater-level audio, seem to grow in popularity every year. If you’re planning to upgrade your home theater, you want to make sure you’re getting all the thrills you paid for, so here’s our guide on how to connect a soundbar to a TV and what you should know when picking HDMI vs optical cables.

Step up to the ’bar

So you’ve got a new smart TV with built-in Netflix, Amazon Prime Video, etc. Or you’ve going to plug an Apple TV and a PlayStation 5 into your TV. Whatever your sources, you’re going to want to get the most sound with the least amount of cables connecting a soundbar to a TV.

An entry-level soundbar can be had for less than $100, and there are plenty of options under $300, or even under $500, etc. Conversely, the best soundbar for a TV (for example, the Sennheiser AMBEO, which has the newest HDMI 2.1 port) will cost you well over $2,000. Regardless of the price, there can be some confusion regarding how to connect a soundbar to a TV. Do you only need High-Definition Multimedia Interface (aka HDMI) cables, or do you also need an optical audio cable? If you only need an HDMI cable, can it be any HDMI cable? Well, we have your answers.

Those answers largely depend on how old the equipment is and what level of HDMI technology both the soundbar and TV incorporate. Many devices made before 2009, as well as some after that, require both an HDMI cable and an optical audio cable. Newer TVs and soundbars can be connected with a single HDMI cord. And the latest multidimensional audio formats, such as the red-hot object-based Dolby Atmos and DTS:X standards, require a single HDTV cable of a certain bandwidth but are well worth that consideration.

Once you take a little time to learn how to connect a soundbar to a TV for max effect, you’ll see that it’s really quite easy despite some technological details. And when you hear the results, whether it’s just enhanced stereo or fully futuristic spatial audio, you’ll be glad you did.

All HDMI cables transmit both audio and video. However, from roughly 2003-2009, HDMI cables only shuttled A/V data in one direction. So when connecting a TV to a soundbar or A/V receiver, you would use an HDMI cable for the video and a second connection, such as an optical digital audio cable, to send the sound “downstream.”

When the Audio Return Channel (ARC) standard was introduced to HDMI cables in 2009, it allowed for convenient two-way communication over a single HDMI cable between a compatible TV and an equally equipped soundbar or A/V receiver. ARC has a higher maximum audio bandwidth than optical connections, and ARC also supported Consumer Electronics Control (CEC), which meant that a remote for the TV could also control the power, volume, and mute functions of the soundbar. ARC also enabled the TV manufacturers to correct lip-synching problems between the TV’s video and the soundbar’s audio.

However, not all electronics manufacturers adopted all the ARC capabilities across the board. With the introduction of the much higher-bandwidth Enhanced Audio Return Channel (eARC) HDMI protocol in 2017, lip-sync correction was made mandatory, CEC setup was often simplified, and full audio codec support became much more widespread.

What does HDMI eARC vs. ARC mean for cables?

The original ARC HDMI standard from 2009 can be used with just about any HDMI cable and, with CEC enabled, it allows the TV to control the soundbar. However, ARC does not support more recent surround-sound audio formats, such as uncompressed 7.1-channel audio and the exciting formats of the moment—Dolby Atmos and DTS:X—as well as other high-bitrate audio, such as Dolby TrueHD and DTS-HD Master Audio (which support resolutions up to 24-bit/192kHz). So those Netflix 4K streams and Blu-ray discs aren’t going to sound their best, unless …

All of the best soundbars for TVs in 2022 are touting Dolby Atmos and/or DTS:X compatibility, so to experience those spatial audio formats from your soundbar, you’ll need a TV with an eARC HDMI port. Luckily, many TVs from 2018 and onward support it, so if you’re investing in one of the best OLED TVs or one of the best QLED TVs on the market right now, you’re set on that end.

However, not just any HDMI cable will do. To connect eARC TVs to eARC soundbars, you’ll need to look for cables with designations HDMI with Ethernet, High-Speed HDMI Cable with Ethernet, or the next-generation Ultra High-Speed HDMI Cable (the futureproofed option). If you purchase a new eARC soundbar, in all likelihood it will include a capable HDMI cable to connect to your TV, but that’s what to look for if you need to check.

In the scenario where your TV has eARC but the soundbar only has ARC, or vice versa, the connection between the devices should most likely work, but you will not be able to take advantage of the high-bitrate audio formats that eARC can provide unless both are on the same standard.

How to connect a soundbar to a TV: HDMI ARC vs optical

2. Connect the TV’s HDMI eARC port to the soundbar’s eARC port using an Ultra-High-Speed HDMI cable. In the rare case that your TV does not have an HDMI port labeled eARC or ARC, connect the HDMI cable from the soundbar’s HDMI TV port to any HDMI port on the TV. That connection will handle the video (and possibly basic audio). In addition, you will need to connect an optical digital audio cable to both devices to handle the sound. Connect an optical audio cable (no longer than 5 meters) from the TV’s Optical Out (or OPT OUT) to the soundbar’s Optical In (or OPT IN).

3. Connect any of your other video devices with HDMI outputs, such as Blu-ray players or video game consoles, to the TV’s other ports. Alternatively, connect them to the soundbar’s other HDMI inputs. If you are using ARC/eARC, either the TV and soundbar can act as the hub/source selection for all external devices, and pass the audio and video signals through. It ultimately depends on where you have the most available ports and feel like selecting inputs.

4. Reconnect the power cords to the TV and soundbar and power on both devices.

5. Access the TV menu settings to enable full operation with the soundbar. In many cases, you will need to adjust one or more settings in your TV’s menu to ensure full compatibility with your soundbar. The instructions for adjusting the audio settings vary depending on the brand and model of your TV.

In general, you will need to access the Sound Settings or the Audio Settings from the TV menu and set the HDMI Audio Out, Optical Out, or Digital Audio settings to Auto/Bypass/Pass-Through, PCM, or Digital/Bitstream.

You may also need to access the TV’s System, Sound, or Expert settings and enable the HDMI eARC, ARC, and/or CEC modes. For more specific instructions for your exact TV model, consult the TV’s manual or the TV maker’s website to find the exact menu settings needed to connect a soundbar to the TV.

How the TV and soundbar remote controls work once connected

What is the soundbar’s best TV connection called?

Depending on the brand of your soundbar, the HDMI port that offers full functionality with an eARC TV may display somewhat differently. The following list shows how popular soundbar brands label their HDMI eARC ports:

Related: How to fix that annoying audio delay on your soundbar

Ultimately, connecting a soundbar to a TV is easy once you pick HDMI ARC vs optical

Now that you know how to connect a soundbar to a TV, you should be assured that making the basic connections is quite simple. Whether your TV and soundbar support eARC HDMI, ARC HDMI, or just HDMI, largely depends on how old the devices are. For ARC and eARC connections, you can connect the soundbar to a TV with a single HDMI cable; otherwise, you’ll just need to connect an optical audio cable in addition to an HDMI cable. Regardless of where you land on HDMI ARC vs optical cables, there’s nothing too intimidating to prevent you from enjoying the enhanced audio experience that a soundbar provides.