Bias lighting will enhance the picture of your screen in a dark room. 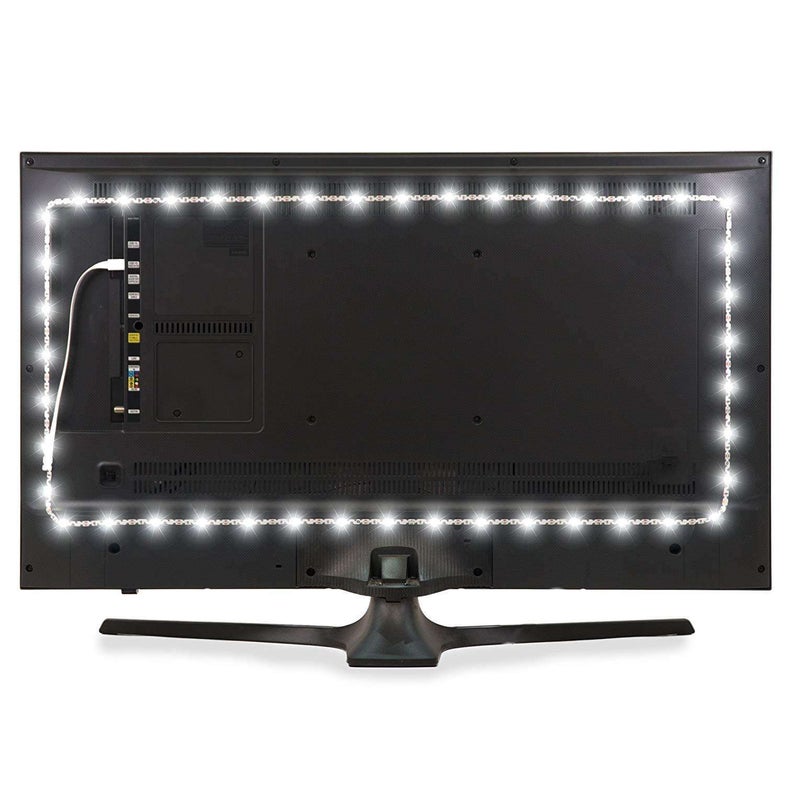 People buy a lot of TVs this time of year. In 2016, Target sold more than 3,200 TVs per minute during its Black Friday sale. And as prices shrink and screen sizes grow, the temptation to trick out your home theater area increases.

While that shiny new TV is likely an upgrade from your old set, it’s not perfect out of the box. In fact, there are lots of steps you can take to ensure the picture looks as good as possible. But one hack involves more than digging into the menus—your new TV could benefit from light shining on the wall behind the display. This is called bias lighting and luckily, it won’t cost you very much money.

Coming out of the dark

It’s a logical choice to turn down the lights when you’re about to watch the latest Fast and Furious flick on your new display. After all, you don’t want reflections from your lamps interfering with Vin Diesel’s meticulous tank tops, and you really want the color and contrast to pop in Jason Statham’s steely eyes.

But it turns out there’s a downside to viewing a screen in a totally dark environment and it comes from the natural limitations of your eyeballs and your brain.

The American Association of Ophthalmologists suggests that with a screen that’s much brighter than its surroundings, your eyes need to work harder in order to see. Your eyes adjust to let in more or less light depending on the brightness of a scene, and movies or TV that constantly vary in brightness cause the eye to have work overtime.

Beyond the long-term effects, shifts from dark to bright can also physically hurt as your eyes try to rapidly adjust to a quick jump cut from dark to light. So, raising the ambient light around the screen allows your eyes to establish a more reasonable baseline that doesn’t require as much adjustment.

By adding some ambient light, you’re also helping your eyes see the sharpest possible picture they can produce. “In a darkened room, your pupil is larger than average, and that will exacerbate any optical aberrations in your vision,” says Andrew Iwach, a clinical spokesperson for the American Academy of Ophthalmology. “If your prescription isn’t correct or you have undiagnosed eye problems, it can appear even more pronounced.”

For some viewers, it might be worth some eye strain to get what they believe to be the best possible picture, but it turns out that watching a black wall with a glowing rectangle on it actually cuts into your overall image quality, thanks to perceived contrast.

TVs have come a long way in recent years when it comes to recreating the color black. Older sets had less efficient backlight that couldn’t produce dark tones as deep as modern models. Because the lights couldn’t always turn all the way off, the blacks on the screen were more like grays, and that takes some of the impact out of dark objects on screen like Batman’s suit or Batman’s car (and other non-Batman related things).

Modern OLED TVs use individual pixels that provide their own backlight and those can turn totally off, which makes their black levels more appealing and helps boost the overall contrast of the screen. However, even those pixels have a tough time looking truly black when they’re competing with a pitch dark room.

Adding a relatively dim light that directly surrounds the screen makes the dark areas of the display look blacker instead of washed out compared to the inky tones in the room. If you keep the light dim enough, it will also give the TV’s bright whites a chance to literally shine without scorching your wide-open eyeballs.

What kind of light should you get?

Just about everything associated with high-end home theater tech is expensive, but getting started with bias lighting is a surprisingly affordable venture, especially compared to how much it can improve the perceived picture of your pricy new television. And while you can hop over to Amazon and pick out the cheapest set of behind-the-screen LEDs, there are some things that should inform your purchase.

Light color is an essential piece of the bias lighting purchasing decision. The most common approach is to go for bulbs that are color balanced to look like natural daylight. This means something that’s in the 6500K range of color temperature. Your brain and eyes perceive this as a neutral color so it won’t make your TV look warm or cool by comparison. To some people, this will look too “cool” or blue, especially if the typical lighting in the room uses traditional light bulbs which typically have a much “warmer” light.

If you’re not sure what color light will work for your preferences, you can opt for something that has variable color balance. It might make your super-high-end home theater nerd friend (the one who is always trying to explain why $300 HDMI cables make sense) cringe, but your overall enjoyment is the goal here.

There are other options out there that go beyond simple bias lighting, like the Ambilight TVs from Philips, which actually try to mimic the overall color on the screen and extend it out beyond the borders of the screen itself. This used to make more sense when regular TVs weren’t the size of small mattresses. If you’re just starting out with bias lighting, going with a simple, neutral light is a better—and much cheaper—bet.

While brightness is typically a desirable trait in a TV, you can’t simply crank that setting and hope to get the best out of your picture. In fact, there are designated brightness standards at which content is meant to be watched. There’s a rule of thumb that traces all the way back to the days of LaserDiscs that says the bias lighting around your display shouldn’t exceed 10 percent of the brightness of your display’s maximum setting.

For HDR sets, the Image parameter values for high dynamic range television for use in production and international programme exchange standard says the brightness of the bias lighting at the edge of the screen should only be roughly 5 nits. That’s hard to visualize, however, so you can use something like the Spears and Munsil HD Benchmark Blu-Ray disc, which displays various test patterns for visually calibrating your TV. One test pattern contains a dimly lit patch that indicates the ideal brightness for your bias lighting. You can match the two with your eyeballs.

You can spend hundreds of dollars on special lighting for the back of your TV, but unless you’re going really overboard, that’s unnecessary—at least to start. There are multiple options with great reviews on Amazon for under $30.

If you want to step up slightly in quality, you can go with a kit. Kits range from $30 up over $100 depending on the size you need and the options you want, but they’re very well-regarded, even with high-end publications and installers.