You Built What?!: A Human Catapult

An air-powered lever that launches people into the sky 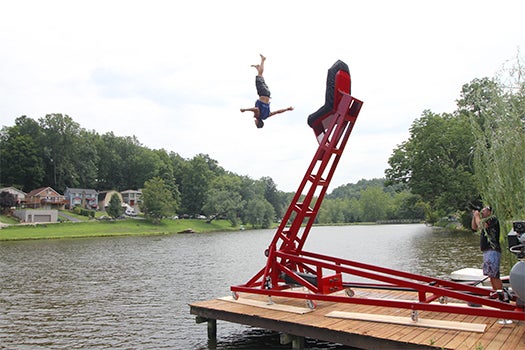 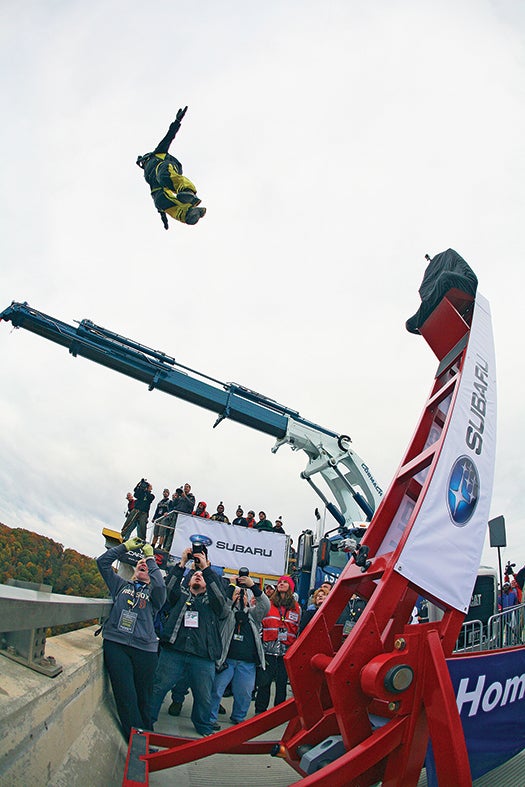 Jason Bell’s 2,500-pound contraption is powered by compressed air. He estimates that 24 BASE jumpers have used it to fly off the New River Gorge Bridge in West Virginia.

Mechanical engineer Jason Bell has helped people throw themselves off the New River Gorge Bridge in Fayetteville, West Virginia, for more than a decade. About 400 BASE jumpers each year, in fact, leap from the 876-foot-high span before deploying their parachutes at Bridge Day, an annual extreme sports event Bell helps run. But two years ago, he decided to build a new thrill for spectators and jumpers alike: a catapult that hurls daredevils head over heels into the chasm below.

Bell’s creations include an electric go-kart and an automated towrope to pull his kids up their backyard sledding hill; he even built smart features into his home. (He can remotely adjust lighting, audio, security, and video camera systems.) But he had never attempted to build anything quite as daring as a human catapult. “Very few have been built, and many have resulted in disaster,” he says. “That just made it all the more challenging.”

The basic elements, at least, came together easily. Every October on Bridge Day, local authorities allow Bell to co-opt a 20-foot-deep section of the bridge for BASE jumpers, which means his catapult could be no longer than that. Bell spent a year drafting the structure—a sturdy base and an arm made of steel tubing—using a 3-D design software called SolidWorks. He eventually settled on a rotating arm 12 feet long, which a local workshop agreed to machine to his specifications. Meanwhile, Bell spent nights and weekends in his garage constructing a compressed-air launching system.

In the first tests, Bell and his friend Joe Caulfield launched stuffed animals, laundry bags, and 200-pound sandbags across his front lawn. The catapult hurled even the heaviest objects more than 50 feet. At one point, however, the stress forced a bearing to shoot out of the catapult’s arm joint like a bullet. (On Bridge Day, two of the caster wheels even cracked from the strain exerted by the 2,500-pound machine.) Bell created and installed a custom bearing, added spring-loaded shocks to cushion stress on the casters, and tweaked a few other features to handle the abuse.

Last summer, Bell towed the catapult to a local lake to try it out with some friends. He sat in the chair as a buddy threw open a ball valve, retracting a piston with compressed air. The arm sprang up within a second, hurling him high above the lake. “This smooth but sudden sensation launches you upward, and then, all of a sudden, you say, ‘Hey, I’m not in the chair anymore,’ ” he says. “I came out of the water hootin’ and hollerin’ like a teenager.” Bell says the catapult’s official debut at Bridge Day later that year was just as big a hit among BASE jumpers. “It’s something I’ll remember for the rest of my life,” he says. 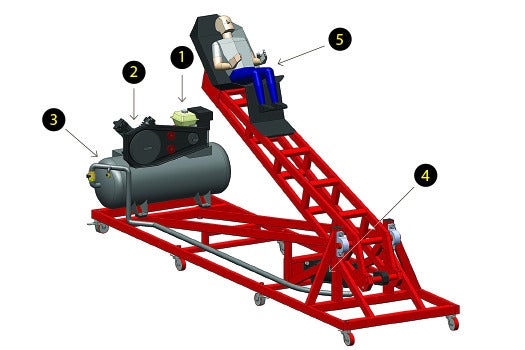 An 11hp gas motor [1] turns a belt to drive an air compressor [2], which feeds a 120-gallon steel holding tank [3]. When Bell turns a ball-valve handle, air pressurized to 130 psi rushes into a pneumatic cylinder [4] attached to the base of a forward-swinging arm. The bucket seat that Bell installed at the top of the arm [5] can accommodate a BASE jumper’s parachute pack. When the cylinder’s piston retracts, it yanks the arm’s base and—like a lopsided seesaw—pivots and flips the chair from horizontal to nearly vertical in less than a second.

Tests at the lake proved sitting upright in the seat wasn’t ideal for deploying a parachute—Caulfield and other volunteers flew headfirst into the water. They solved the problem by sitting upside-down, which flipped them into a stable vertical position.

Although the catapult can launch a person 20 feet high and 50 feet away, that’s not good enough for Bell. He plans to retrofit the device with lightweight aluminum parts so its piston can fling people higher and farther. “I’m also looking into buying a big airbag so I can launch people onto that,” he says.

WARNING
We review all our projects before publishing them, but ultimately your safety is your responsibility. Always wear protective gear, take proper safety precautions, and follow all laws and regulations.