You Built What?! A Flashing, Tilting Ping-Pong Table to Throw Off Opponents 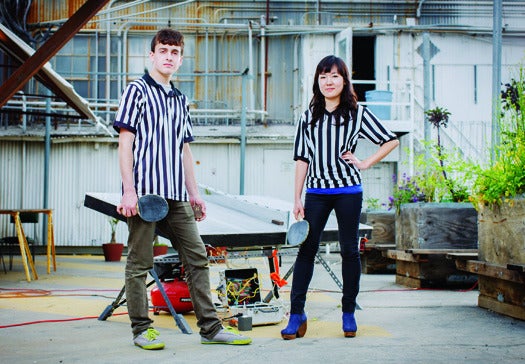 Internships more often than not are mindless, coffee-fetching black holes of boredom. But not at Syyn Labs, a Los Angeles collective that creates unusual interactive art and science projects for commercials and music videos. Last summer, student interns Hoon Oh, Robb Godshaw and Jisu Choi took it upon themselves to reinvent the sport of table tennis. Their project could pass for an extra in Transformers: It’s part ping-pong table, part machine, and so difficult to play that it reduces pros to the level of rank amateurs.

Oh came up with the idea of doing a ping-pong project in part because the game is a staple of so many cultures, and is normally relatively easy to play. The group wanted to make the game more social than competitive, so they eliminated the potential for humiliating one-sided contests by building a table that tilts on demand and makes it tough for even highly skilled players.

They started by scrounging for parts in the Syyn Labs warehouse. A rectangular piece of plexiglass that had once been used in an illuminated dance floor became the tabletop. To drive the tilting surface, Godshaw suggested using pneumatic pistons left over from a commercial for a Google science fair. Choi worked on the drive system and other aspects of the design, while Oh wrote software to control the pistons and switch the table from level to off-kilter. The group found that getting the angles correct was tricky. “We wanted to make it tilt at a dramatic angle but not hit anybody in the jaw,” Godshaw says. 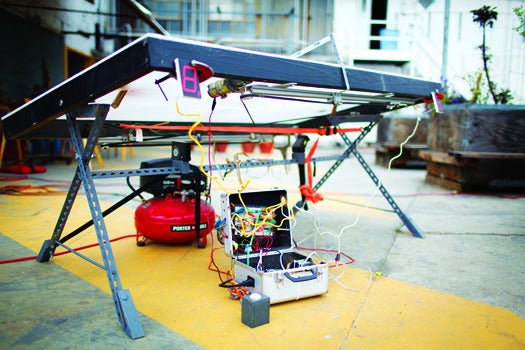 At the same time, they worked on the frame and legs. An early version using two-by-fours proved too heavy (they wanted to be able to easily transport the table). Outside the warehouse, Godshaw found a pile of scrap metal tossed aside by the lab’s previous occupant, a paint company. They kept the wooden frame beneath the acrylic surface but replaced the legs with the scrap metal to limit weight. The legs held, but during an early test, one of the pneumatic cylinders failed. When they took it apart, they saw that it was encrusted with sugar; it had been used to squirt colorful liquids in the contraption Syyn Labs had designed for the Google commercial and had fruit juice residue inside.

Thankfully, they found another cylinder, and after adding a few extra touches, including a pair of flashbulbs to help players blind their opponents, the interns got their “Swing Pong” table working. They were right about leveling gameplay—when table-tennis pro Adam Bobrow visited Syyn Labs, he won his match by only a single point. In fact, the game is such strange, absurd fun, Godshaw says, that competition is an afterthought: “Most games never make it to 9.”

See how the game works on the next page. 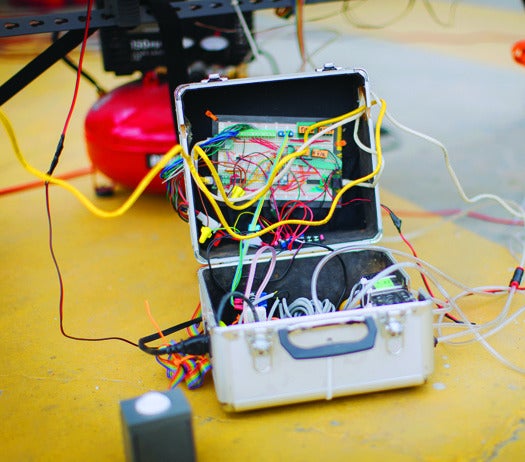 The nerve center of the table—an Arduino microcontroller, four solenoid valves and three different power supplies—is stashed in an old powerdrill case. Godshaw repurposed a car-key remote so that it could signal the Arduino board to make the table move. The referee controls the remote, tilting the table. A touch of one of the buttons signals the corresponding solenoid valve to release a burst of air from a compressor beneath the table. The compressed air drives the piston, raising one side by 15 degrees.

Godshaw suggested adding an automatic moving net that rewards the player who’s losing the game. The Arduino controls an electric motor, which drives a belt-and-pulley system that moves the net back and forth across the table. When a player scores, the referee enters the point with the remote, and the software is programmed to shift the net so that the point-scoring player has a smaller area to aim for.

“Whenever there’s a big point disparity,” Godshaw says, “the winning player will be aiming for a 12-inch section of the table.”

Initially the idea was for both players to hold a paddle and a remote. They would swing with one hand and control the remote with the other, tilting the table or switching on one of the flashbulbs to distract their opponent.

This would have made serving too hard, though, so the group designed an automatic serving mechanism. When the referee activates it with the remote, a solenoid valve lets out a burst of air that shoots a ball up through a hole in the middle of the table, over the net and toward the receiving player.