You Built What?! A Wearable LED Television 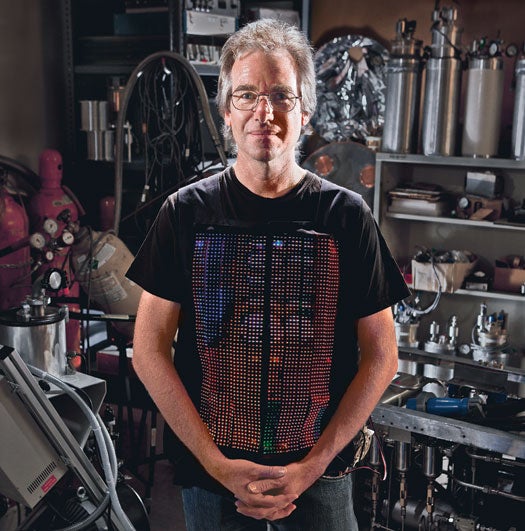 David Forbes was on his way home to Tucson, Arizona, after a family trip last summer when a policeman stopped him in the Detroit airport. The officer said he had received 50 panicked phone calls since Forbes had entered the building, and now his entire family had been marked for extra screening. The delay was inconvenient, but it shouldn’t have come as a surprise. Forbes had 160 circuit boards and enough electronics to start a data center strapped to his body. What the authorities didn’t realize, though, was that all the equipment wasn’t dangerous—it was actually a wearable TV set.

Forbes, an electrical engineer, built his first video coat in 2009 after getting his hands on a collection of surplus LED displays. He transformed them into what he calls “the world’s worst television,” an all-red screen that weighed 50 pounds. He wanted to make a better, lighter version, and thanks to a side business selling homemade wristwatches, he had the spare cash. He laid an old overcoat out on a table, measured its dimensions, and guessed that he could fit it with enough LEDs to create a sharp 160-by-120-pixel display. Next he sorted through his gadget box and found a few flexible circuit boards. The flexibility was ideal for a wearable screen, but he wanted to have more pixels, so he built a prototype of a long, thin board with 30 rows of four LEDs each and shipped it to a circuit-board manufacturer to make 175 more. 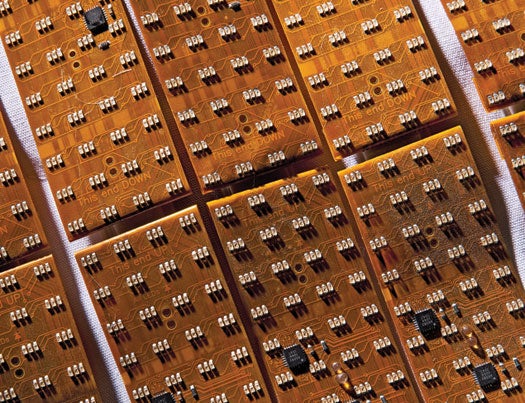 When the vest is displaying video, roughly five gigabits of data flows to the LEDs every second.

Forbes also built an additional circuit board to scale down the analog video signal from his iPod, and three other circuit boards that translate the signals into instructions for the LEDs and deliver power from two lithium-polymer batteries. He put the batteries into his pants pockets, and hot-glued the control boards to the shoulders and the flexible display boards to the front and back of the coat. A little Velcro down the middle replaced the buttons on the coat. The finished version weighed only eight pounds.

At the airport, Forbes convinced airport security that he wasn’t a threat by offering to show them The Simpsons on the coat. Since then, he has cut the coat into two less-cumbersome vests. Although they’re relatively comfortable and they work well, they haven’t replaced his family TV. “I’m not using them daily,” he says, “but they get taken out now and then if I’m in the mood for a little attention from strangers.” 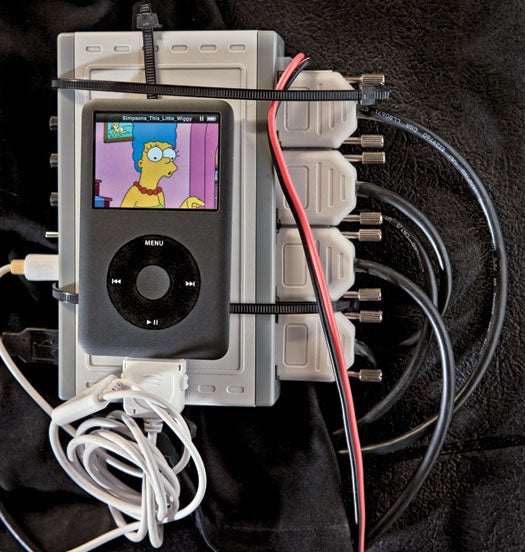 The iPod connects to a circuit board that has a chip normally used to scale down the pixels in surveillance video.

Forbes’s iPod plugs into a circuit board on the vest’s left shoulder. The board includes a digitizing chip—a type used in security video systems that allows the feeds from four cameras to fit on one monitor—that he repurposed to scale iPod video down to a resolution consistent with his display. Additional processing converts the iPod data into signals for the LEDs, which travel along Ethernet-like cables to four separate boards, one on each shoulder and hip. From there, the signals move through ribbon cables to the three miniature chips on each of the flexible circuit boards located on the chest and back. The chips turn the LEDs on and off 360 times a second to create the illusion of changing color and brightness.

Heavy batteries would make the coat hard to wear, so Forbes found an R/C hobby shop in Washington that sold lightweight, inexpensive lithium-polymer batteries. One battery fit in each pocket, which gave the coat roughly an hour of run-time. The smaller vests last up to 90 minutes.

Forbes initially thought about rigging small speakers to the shoulders of the coat, but he realized that they wouldn’t be powerful enough to let him show off his invention at Burning Man, the annual festival in the Nevada desert. So he wired the coat to another one of his inventions, a boom box for bicycles that he built from a six-inch-diameter drain pipe and a pair of outdoor marine speakers.