You Built What?!: The World’s Fastest Baby Carriage

A motorized stroller that accelerates to 53 mph. 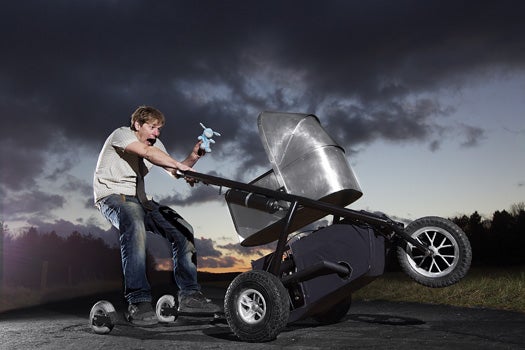 News of impending fatherhood affects men in different ways. Some guys pump their fists. Others light cigars. A few flee. When 33-year-old Colin Furze learned that his girlfriend was pregnant, he channeled his paternal excitement into building the world’s fastest baby stroller. The twin-exhaust, 10-horsepower, gasoline-fueled pram can accelerate to speeds nearly fast enough for the highway in less than 30 seconds.

Furze, a plumber in Stamford, England, rode BMX bikes as a kid and missed the adrenaline rush as an adult. So in his twenties, he sought new thrills. “For some reason, I thought building a nice big fire was the answer,” he says of his first project. Furze’s 50,000-square-foot inferno, which he lit by launching a rocket into a mountain of wood, earned him a spot in the 2006 Guinness World Records book. Once Furze saw his name in print, he was addicted. Every two years he strives for a new mark. He holds the record for the fastest mobility scooter and, until recently, the world’s longest bike. 2012 became the year of the stroller.

The build began with a baby carriage that Furze and his girlfriend, Charlotte, bought. He carefully measured every piece to construct a motorized look-alike. Thanks to a previous experiment, Furze had a steel roll cage lying around, which he cut and welded into the new stroller’s skeleton.

Accelerating and braking via foot pedals could send Furze off course on rough roads, so he set all controls into a handlebar (see “How It Works,” below) and built a stable platform for the driver to stand on. His first test-drive melted a set of skateboard wheels he’d attached to the platform. “It was quite pathetic,” Furze says. A few days later, he tried again with plastic caster wheels; that time, road vibration rattled his feet numb. Furze eventually achieved a cushy ride with thick tires from an old mobility scooter.

His son, Jake, was born in September 2012, and a month later Furze cleared 50 mph while riding his stroller on a nearby drag strip—the first world record of its kind. He’s quick to note that he has no intention of putting Jake in the speeding carriage. But that hasn’t stopped him from spooking onlookers with a convincing stand-in: a baby doll wrapped patriotically in a Union Jack. 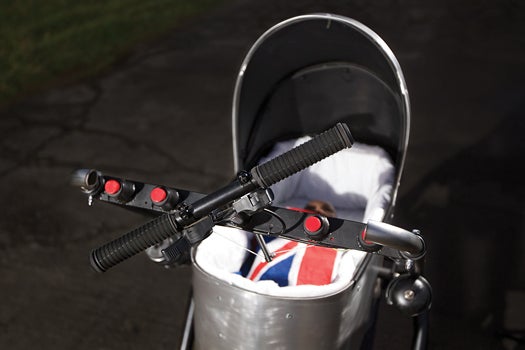 The stroller’s four-stroke, 125-cubic-centimeter engine was meant for a motorbike. But Furze planned to stand, not sit, so he couldn’t use the built-in pedals. Instead, he positioned the controls within reach of his hands. Two motorbike levers beneath the stroller’s handlebar manipulate the brake and accelerator. Four buttons on a crossbar, meanwhile, allow Furze to quickly shift gears and turn the engine off and on. 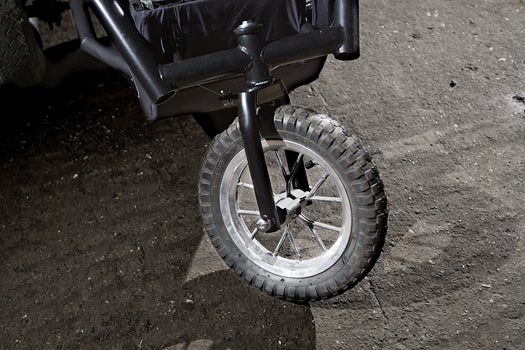 He can make minor steering adjustments, although not full turns, by twisting a handlebar linked to two bicycle brake cables. Each cable runs through the carriage’s frame and tugs at one side of the pram’s single front wheel. 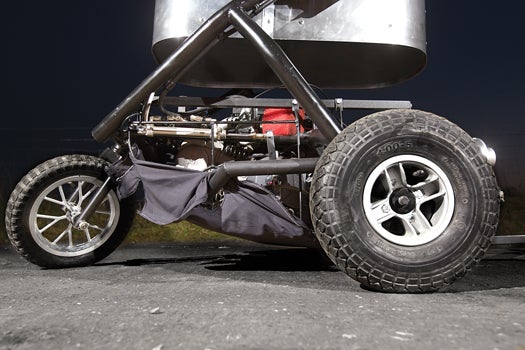 Furze welded a quarter-inch-thick steel plate to the frame’s base to give his stroller a lower center of gravity and more stability at high speeds. Yet he won’t be using the pram to commute to plumbing jobs around town. “A little [stretch of] bumpy road, and it would throw you off,” he says. 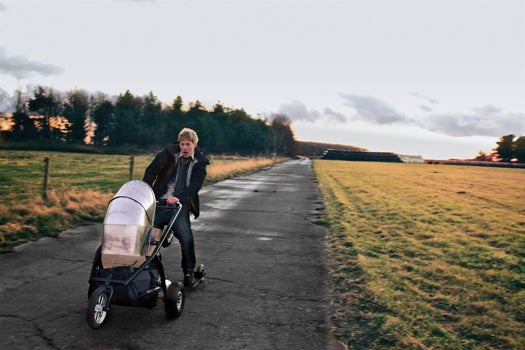 Furze cut and bent several aluminum panels into the shape of a stroller canopy. He planned to drape cloth around them in a play for realism, but in the end he stuck with rough, unadorned metal. “It looks a bit more Mad Max,” he says.