The cast can be removed piece by piece for sectional healing 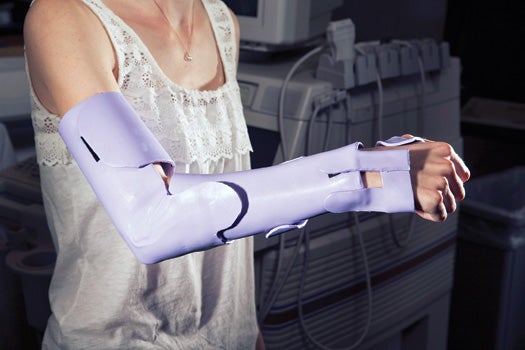 When Kelly Anderson shed her arm cast two months after a wrist operation, her joints were so stiff she couldn’t turn a doorknob. She didn’t fully recover for another four months. Daniel Amante suffered similar post-cast complications after he injured his knee; Amanda Harton watched her soccer teammates struggle following various injuries; and Clara Tran saw even greater suffering among the frail patients in the nursing home where she volunteered. By the time the four met as undergrads at the University of Virginia, they all recognized a common medical dilemma: Long periods of immobilization help heal broken bones and other injuries but can harm otherwise healthy joints and muscles.

In 2009, during a biomedical-engineering course, the professor challenged the students to solve a problem that was important to them. They set about finding a way to reduce the harm that casts cause. After considering several ideas, they decided to create a modular cast. The device would secure the entire arm like a conventional cast, but a doctor could disassemble it a piece at a time as the bone healed, freeing up the arm to make specific movements one by one to build flexibility and increase blood flow to muscles—and reduce the length of physical therapy after the cast is removed by as much as half.

The students wrapped clay around their arms to determine the best shapes and positions for the pieces and then built and tested plastic prototypes. They had a doctor put Harton in a regular cast, measured her range of motion, and put her in a prototype to compare the results. After four months, the students had a fully functional version of their invention, which they called PuzzleCast.

The device has six removable pieces. Two pieces brace the forearm and hand, keeping the broken limb stable. The rest restrict each of the lower arm’s four movements: the bending of the elbow and the up-down, side-to-side and twisting of the wrist. A cast technician assembles the kit by putting the heat-moldable plastic in hot water, shaping the cast around the patient’s arm, and snapping in rivets to fasten the pieces. The application time is about the same as for a standard cast. To take a piece off, doctors just remove its rivets.

In 2011 the students received a $10,000 grant from the National Collegiate Inventors and Innovators Alliance to test the PuzzleCast’s effects on people who wore one for several weeks. The next step, they say, is to license the design to a manufacturer that can do clinical trials, develop more sizes and a version for legs, and bring the PuzzleCast to patients, possibly as soon as in the next three years.

The cast consists of six pieces that can be removed independently, enabling patients to move more parts sooner.