Gray Matter: In Which I Play With White Phosphorus

One of the nastiest substances on Earth creates a beautiful glow 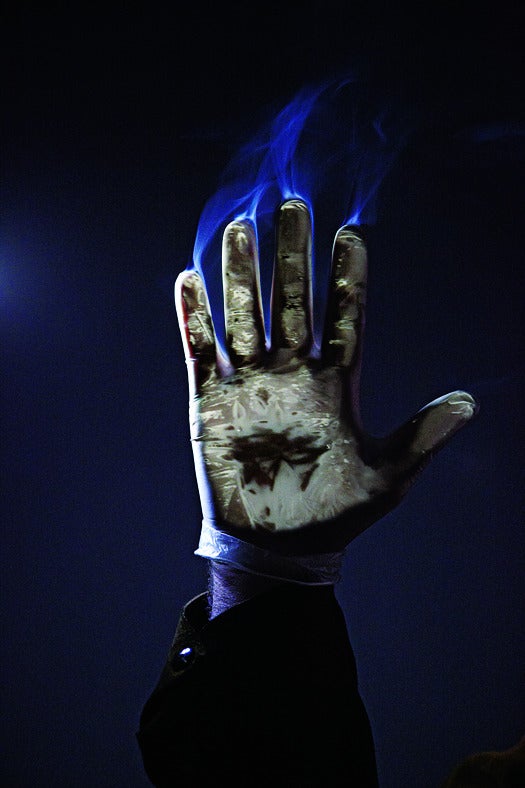 Being a mad scientist can be a thankless job, but every once in a while you get a chance to shine—literally. I recently had that opportunity when working with a TV show to film one of the most beautiful of all chemical phenomena, the cold luminosity of white phosphorus.

White phosphorus, an uncommon form of the element, is terrible stuff. It’s incredibly toxic, catches fire spontaneously in air, and is frequently used in the production of methamphetamine. There are few companies lining up to sell it, and the producers of the television show couldn’t find any sane scientist able to get it and do the demonstration for them. I, however, keep some out back behind my house in an army-surplus ammunition case.

With my trusty Icelandic chemist friend Tryggvi at my side calculating the proportions to make sure we’d survive, I mixed up a solution of white phosphorus in toluene (paint thinner) and spread it on my hand (with latex gloves on—I may be mad, but I’m not crazy). The effect was something I’d only read and dreamed about: fleeting, flickering, flowing sheets of cold light all over my hand that rippled as I blew on them. 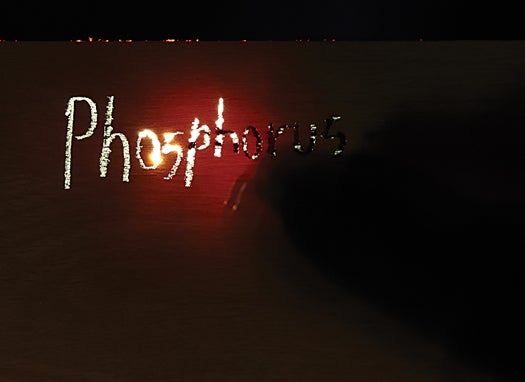 Letters written with a piece of white phosphorus quickly burn through a wood surface.

As the toluene evaporated, the white phosphorus did what its name implies—it phosphoresced, reacting with oxygen from the air to produce a luminous gas fractions of an inch above the surface of my hand. This reaction is not just risky to create, it’s also difficult to photograph. We used the best low-light camera available to get it to show up so well.

To the dark-adapted human eye, though, it looks bright, and frankly rather alarming, especially when I took the gloves off and realized that toluene goes through latex. I didn’t plan to have white phosphorus on my skin (thankfully, a tiny, harmless amount), but I have now seen my own bare hand flickering green with poison light, and it was every bit as satisfying as I thought it would be.

Warning: Do not try this. Even a tiny amount of white phosphorus can be highly toxic if ingested, and larger amounts burn skin on contact.