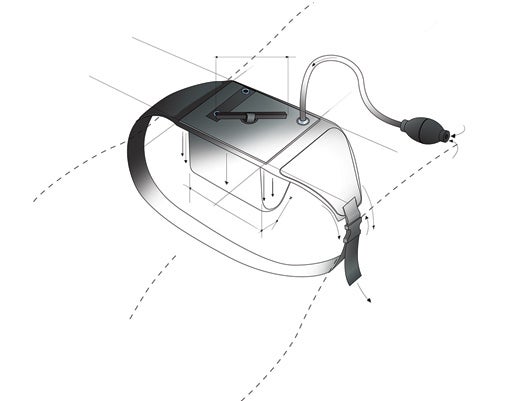 While serving as an army medic during Operation Desert Storm, Richard Schwartz became all too familiar with gunshot wounds, particularly shots to the pelvis and upper legs. Enemies would target that region because body armor doesn’t always cover it. Conventional tourniquets don’t work around the abdomen—it’s impossible to tie them tight enough to cut off blood flow from the aorta. Soldiers with “junctional hemorrhages” may have only a few minutes before they bleed to death.

At a medical conference in 2006, Schwartz, now the chairman of the emergency-medicine department at Georgia Health Sciences University, struck up a conversation with John Croushorn, a former Army surgeon, about how to solve the problem. Soon after, the two began working on an abdominal tourniquet. Their first design was a bladder shaped like a wedge, attached to a strap that could be tightened around the abdomen at the navel. When medics inflate the bladder with a hand pump, the wedge displaces the bowel and, eventually, compresses the aorta against the spine and the posterior abdominal wall. The blood flow to the lower body stops.

Schwartz and Croushorn continued to modify the device, but they couldn’t make it stable enough to use during combat, because jostling the patient caused the tourniquet to shift out of position. Ultimately they fixed the problem by adding a base plate to hold the bladder in place and a windlass, a lever at the front that tightens the tourniquet and then locks.

The inventors tested the new version first on pigs and later on people. Last October, they applied for FDA approval, expecting the process to take about three years. “Eight days later, the FDA told us they had accepted all our research,” Croushorn says. “We hadn’t even lined up a manufacturer yet.”

The U.S. Army soon ordered 60 tourniquets for combat medics, with the first batch delivered to troops in May. The U.K. ministry of defense and French and German special forces have also expressed interest. The inventors next plan to market the tourniquet for nonmilitary use, and have already had inquiries from several emergency medical-service and law-enforcement agencies.

After positioning the tourniquet, a medic tightens it by twisting a windlass. A hand pump inflates a wedgeshaped bladder that compresses the patient’s aorta against his spine, until blood flow to the lower body is cut off.