A cleaner wash feeds back water as you shower 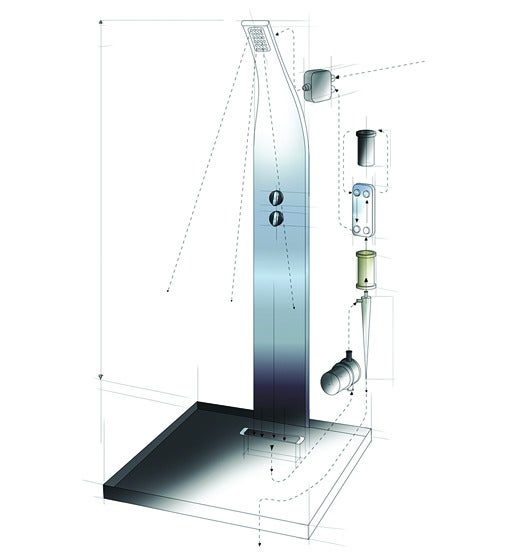 Taking a shower draws more water and more energy than any other daily household activity. Low-flow showerheads save only a little of both, typically at the expense of comfort. That’s because they let the hot water—and all the heat energy it contains—go down the drain.

In 2004, Peter Brewin, an industrial-design student at the Royal College of Art in London, set about creating a more efficient shower that doesn’t require lower pressure. It couldn’t just capture and recirculate the water; most countries require shower water to meet potable-water standards. So instead he designed a miniature treatment plant that continuously captures, cleans, and recirculates 70 percent of the water used during a shower. Even with the energy the system consumes, it still uses 40 to 70 percent less power because the system doesn’t have to heat as much water. Over the course of a year, a typical household would use 20,000 to 32,000 fewer gallons of water with Brewin’s system. That, in turn, would save a local treatment plant upward of 200 kilowatt-hours of energy.

Because other water-treatment processes are too slow for real-time recirculation, Brewin decided to use pasteurization, the quick heating and cooling method for purifying milk. Shower water is already about 106°F when it hits the drain. A heat exchanger and a small electric heater raise the temperature the extra 56 degrees needed to reach the pasteurization point of 162°. To filter out dirt particles, Brewin constructed a funnel that spins the water that flows into it. Centrifugal force flings the heavy undissolved particles to the edges, where they are washed down the drain.

Within a year of starting work, Brewin had a proof-of-concept prototype. (To test its filtering ability, he would limit his showers to once a week.) Since then, he has licensed the technology to Australian engineering firm Cintep to solve remaining problems, such as how to more effectively remove shampoo residue. The first showers, which will most likely be installed in drought-prone cities and disaster areas, will debut next year.

A funnel separates undissolved particles from water. The water passes through a filter, a heat exchanger and a pasteurizer that kills any remaining bacteria. It circulates through the heat exchanger again and mixes with new cool water before entering the showerhead.