How to Copy the Great Mineral Waters of Europe At Home 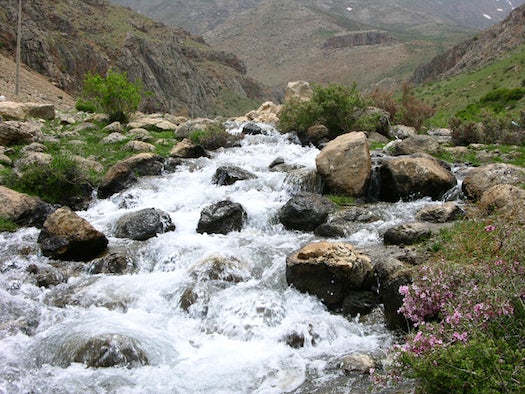 The mineral composition of water varies subtly, almost imperceptibly, from place to place. Variation in bedrock makes the effervescent springs at Vergeze, France, where Hannibal allegedly found a refreshing drink after crossing the Alps, different from the sulfuric liquid bubbling up out of the ground at Saratoga Springs, New York. Sulfates near Burton, England impart a distinctive minerality to the region’s pale ales. And connoisseurs pay top dollar for these differences.

If you’re serious about drinking water, you probably want to add CO2 to it—the bubbles of the gas add a sensory perk and light up some of the same receptors in our brains as mustard oil and wasabi. That done, move on to blowing everyone’s mind by simulating the finest effervescent mineral waters in the confines of your own home, just as chemists have been doing for as long as artificial carbonation has been around.

First off, a general word of advice

In the Modern Bartenders Guide, or Fancy Drinks and How to Mix Them (1884), O.H. Byron explains Seltzer Water is “carbonate of soda, common salt, and carbonate of magnesia.” His non-specific advice, the kind you’d expect from a discerning bartender or a water sommelier, should also serve as an instructive recipe for amateurs attempting to conjure up a mineral water: Please Experiment.

Licensed druggists once dispensed morphine and cocaine. These apothecaries soon became fertile breeding grounds for the lucrative ice cream soda fountain business. (These places sold all sorts of concoctions with purported medical benefits—Coca-Cola, Pepsi-Cola, ginger ale, Moxie). Early druggists also dispensed bicarb soda. Sounds fancy, right? Well, it’s just water and baking soda, a rough approximation of mineral water. James Cutbush’s The American Artist’s Manual (1814) describes one of the earliest known recipes: “Soda water is nothing more than four or more grains of soda, contained in a pint or more of water, and saturated with carbonic acid.” That’s 1/4 of a gram—or a little less than a 1/16 of a teaspoon—for every pint. If you’ve gone this far, it might be time to pick up a triple-beam or a digital scale to weigh out the minerals in your soda water. White lab coat totally optional.

(NOTE: Water is tied to place; it’s also tied to time. Today, much of the world’s water, including that in Cutbush’s home in Philadelphia, has slightly acidified, so an alkaline solution like baking soda helps neutralize acid rain—in miniscule amounts. The shifting baseline means you also might want to add slightly more bicarb for a historically accurate taste.)

Once you’ve mastered the basic technique, discovered the optimal temperature and pressure for your home carbonation system, which are as important as the addition of minerals, it’s time to amass a collection of salts. You’ll want table salt (NaCl), sodium bicarb (NaHCO3) and Epsom salt (MgSO4) along with the slightly harder to find calcium hydroxide (Ca(OH)2) and milk of magnesia (Mg(OH)2). (Skip the bath salts, people, they’re not even salt.) Martin Lersch of the blog Khymos has done the dirty work and you can download his mineral water calculator for Perrier, Gerolsteiner, and Vittel. Darcy O’Neil, in Fix the Pumps, also offers advice. With enough of the right calculations, you too can master the finest of European bottled waters, without every making a trip overseas.