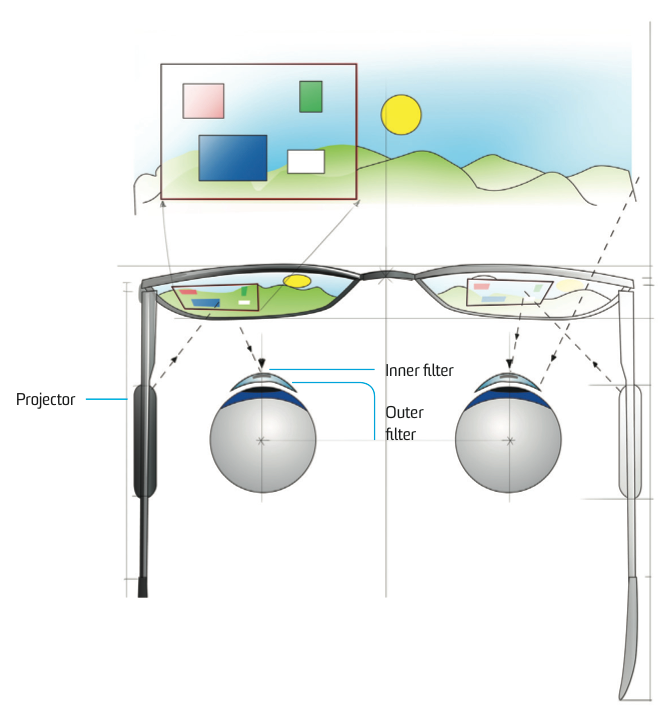 After two decades as an electrical engineer, Randy Sprague quit his job in 2008 to start a solar power company. He had been planning the venture for years, saving up, getting his wife’s blessing. But then one morning while taking a shower, he had a brainstorm for an entirely different idea: contact lenses that could act as part of a wearable display. Users could instantly augment their view with information—say, the price of an antique in a store or the species of a tree in the forest—or transform their field of vision into a virtual videogame screen. Suddenly the solar company no longer seemed as appealing.

Sprague had designed wearable displays used by the military at his old job but found it difficult to produce a lightweight one with a wide field of view. What he realized in the shower was that he could sidestep those problems by moving the screen to a pair of glasses and adding an image filter right on the user’s eye. To develop the invention, he founded a company he named Innovega. Within 18 months, he had received a National Science Foundation grant.

In Sprague’s current prototype, called iOptik, two small projectors mounted on each arm of a pair of eyeglasses cast an image on the inside surface of polycarbonate lenses. Two sets of nanofilters made from minuscule wires embedded in each contact lens permit different light sources to enter the user’s eye. The outer filter lets through unpolarized light from the outside world. The inner filter lets in only light from the projectors, by blocking out light of different wavelengths. This allows the user to see the display image and the outside world simultaneously. Users will also be able to switch from the see-through mode to a totally occluded mode so they can play a videogame or watch a 3-D movie with a 120-degree field of vision.

iOptik is not alone in the burgeoning field of augmented-reality devices. Other companies, including Google, have AR systems in development, but those displays are far heavier or have a much smaller visual field. Sprague says his invention will be ready for FDA testing by the spring of 2014, and he is currently in talks with electronics companies interested in licensing it. Innovega recently received funding from Darpa, the Pentagon’s R&D arm, which plans to use iOptik as part of a project aimed at equipping troops with “super vision.” Using iOptik lenses, soldiers could, for example, call up an overhead map of a battlefield while at the same time seeing the real thing right in front of them.

Each iOptik contact lens has two embedded nanofilters. An outer filter lets in light from the outside world; an inner filter lets in images from projectors mounted on the arms of a pair of glasses. The combination gives the user an augmented-reality view.