Spring-loaded skates that give hockey players a boost 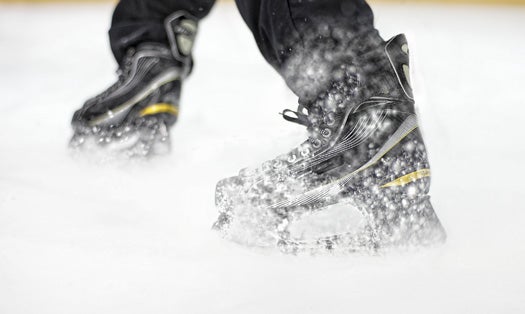 David Blois manages condominium properties near Toronto, but at any given time he’s usually also working on several inventions—a solar-powered smoke detector, say, or an age-spot-erasing skin cream. In 1998 he was ice skating at his local rink when an idea popped into his head: a hockey skate that used springs to harness a skater’s kinetic energy. “It’s really hard to invent something new,” Blois says. “As I researched patents, I got more excited. No one had ever tried this before.”

Ice skates haven’t changed much in 5,000 years. Whether they’re made of leather and sharpened whalebone or carbon fiber and stainless steel, every one of them consists of a boot, a blade and something to hold them together. To make his Launch Skates, Blois had a prototype builder insert two compression springs into the hollow plastic blade holders on a pair of battered hockey skates and then attach the springs to the blades (one at the toe, one at the heel). When the skater begins his stride, the springs compress and the blade slides a few millimeters up into the holder. As he lifts his foot, the springs release their stored energy, and the blade slides to its original position, giving the skater an extra push off the ice.

Blois hasn’t had the money to get ice time and run comprehensive time and fatigue trials with hired skaters. But experts who have tried the skates see the benefits. “They feel a little different, but once you get used to them, you can definitely feel a boost, especially getting going from a standing start,” says Bill Heath, a hockey instructor with Hockey Extreme hockey school in Toronto. “I skated for 20 minutes and I felt less fatigued.” Michael Austin, an athletic therapist and amateur hockey player, says that the skates allow players to push with just their forefoot rather than skating flatfooted, and that could reduce injuries to muscles and joints.

Another tester, however—Curtis Brown, a center for more than a decade in the NHL and now a youth-development coach for the San Jose Sharks—says the skates still need to provide better balance and be more responsive for quick direction changes. To address these concerns, Blois will machine-mold blade holders with tighter spring tolerances. After that, he plans to approach skate manufacturers. If a company licenses the design, he says, it could put Launch Skates on the ice within a year. 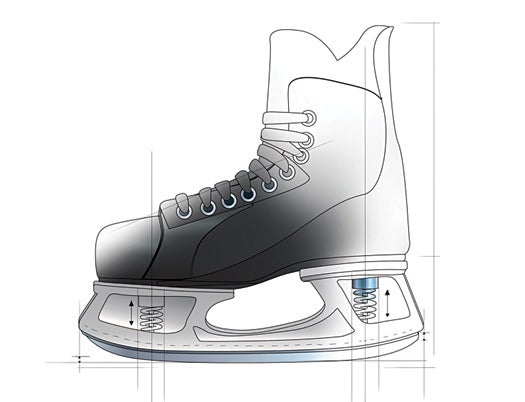 When a skater steps on the ice, the Launch Skates’ springs compress, storing kinetic energy that is released when the skater takes a stride. By placing springs under the toe and heel, the back of the blade can move a different amount than the front, making the skate more responsive.