Invention Awards: A Bridge That Keeps Guitars Always in Tune 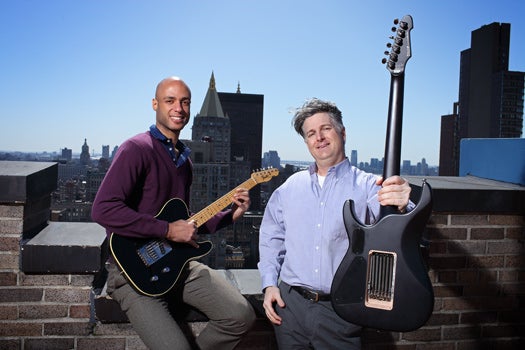 In a small engineering studio in Bronxville, New York, Cosmos Lyles and Paul Dowd eagerly take turns at the dry-erase board, sketching out diagrams of springs, levers and tension curves. This may not seem very rock ‘n’ roll, but what they’re creating will let the musicians on their current client list, including Slash and Rob Zombie’s guitarist John 5, shred harder than ever: a bridge that keeps the instrument continuously in tune.

Guitar strings need constant tension to stay tuned, but they’re easily loosened or tightened if the temperature changes, the instrument gets knocked around, or the guitarist just plays too hard. In an EverTune-equipped guitar, the bridge, which holds the strings in place, contains six spring-and-lever contraptions, one at the end of each string. These keep the strings’ tension constant even if the tuning pegs get turned or the strings become loosened or tightened accidentally.

Each string is attached to a lever, which is in turn attached to a spring. To tune up, the guitarist tightens an adjustor screw at the bridge that alters the position of its corresponding spring, changing its leverage to obtain the right tension. If the guitar string loosens or tightens after being set, the lever shifts, but it is counteracted by the spring so that it holds the desired tension, until it needs to be replaced. (The guitarist can change the tuning anytime simply by readjusting the screws.)

For musicians, this elegant design translates to less time spent fiddling with guitars, and more time onstage and in the studio. While recording, Dowd says, “everyone talks about being annoyed waiting for the guitarist to tune up. They’ll tune every take.” And during live shows, guitarists may swap out for a new guitar with every song.

In 2005, Lyles, a Duke University engineering graduate and an avid guitarist, built his first tuner out of plywood, two screws, a skateboard bearing and some spare guitar parts.

The guitar is tuned by turning a screw on the EverTune bridge (no tuning pegs are used), which adjusts the tension of a spring that corresponds to one of the six strings. Each spring attaches to a lever that holds the string in place; the lever shifts if the string loosens or tightens, but the connected spring maintains the proper tension to keep the guitar in tune.

That version (based on a different concept than EverTune) kept only two segments of a guitar string in tune with one another. Next he attempted to figure out how to keep all six strings in absolute tune using springs. But after a year of toiling alone, he grew eager to find a partner to help refine his idea. “I basically Googled ‘prototype engineer,’ ” he recalls. This led him to Dowd, the owner of Creative Engineering, a product-development company, and an amateur guitarist himself.

The partnership paid off. Dowd came up with the essential lever-and-spring system that makes EverTune work. Together the two also devised a bend stop, a metal stopper that prevents the lever from moving past a certain point, allowing musicians to move strings sideways and “bend” notes, a common technique in guitar solos.

Now the two are on their 16th prototype and are honing the final design. And they’re getting noticed. They have about 35 EverTune guitars either on the road, in the studio or waiting to be retrofitted. They are also in talks with guitar makers, and hope to have electric guitars and basses embedded with EverTune by next January. EverTune retrofits for old guitars should be on the market by the following May. After that, the inventors say, they would like to tackle other instrument strings—like the 230 or so on a piano.