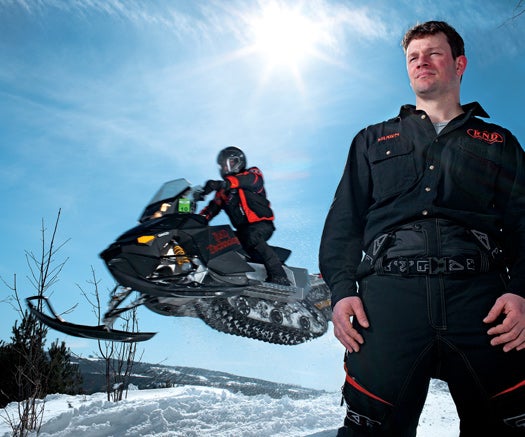 Shawn Watling had been drag-racing snow-mobiles for years before he set out to revolutionize the design of their drive system. John B. Carnett
SHARE

Want to drag-race a snowmobile? Take today’s featured Invention Award winner out for a spin.

Nobody would have expected the biggest innovation in modern snowmobiling to come from a self-taught engineer, a broken-down all-terrain vehicle, and a drag strip. No one except for those who know Shawn Watling. The 35-year-old Toronto millwright, who installs and services mammoth printing presses, is a former jock, a closet mathematician, an amateur chess champion, and a serial inventor with four patent-pending inventions to his name. He also has a lifelong addiction to snow and speed—he first rode on a snowmobile at nine months old and has been drag-racing snowmobiles and other vehicles for the past 15 years.

In 2005, Watling bought a scrapped ATV for $250 and retrofitted it with a 130-horsepower snowmobile motor and trans-mission for fooling around on his local drag strip. But what started as a lark became an obsession when a dynamometer test, which measures power and torque, revealed that his Frankenstein road vehicle was delivering 85 percent of its engine power to the ground, a major jump over a conventional snowmobile’s 55 percent.

How the Snowmobile Works

Driving the snowmobile’s track from the rear creates torque. During acceleration, the torque shifts ground pressure to the rear for better control and speed; during braking, pressure shifts forward again for improved stopping capability.

The surprising results led him to discover that front-drive snowmobiles are inherently inefficient, because the way they pull their rubber track compresses the rear suspension and increases rolling resistance. Driving the track from the rear, he reasoned, would eliminate the problem. “Once I figured that out, I started losing sleep,” Watling says. “I had a perfectly good snowmobile, and I started cutting it up that night.”

Although others have attempted it in the past, no one had succeeded in developing a rear-drive snowmobile with a rear suspension capable of maintaining track tension over bumpy terrain (which causes belt slippage and braking problems). But over the next five years, Watling relentlessly experimented with rear-drive designs. To determine the optimum geometry and the best way to maintain tension, Watling used a snowmobile-size cardboard template with nails for pivot points and string for the track. He also built a snowmobile with a unique adjustable rear suspension that could be raised and lowered on the fly. Seven prototype suspensions and five retrofitted sleds later, he found exactly the configuration he was looking for—and RAD (Rear Axle Drive) Technology was born.

RAD employs Watling’s innovative “cradle scissor” geometry, which capitalizes on an independent suspension arm to maintain consistent track tension even while negotiating rough terrain. When one area goes slack, the other tightens. With this design, the snow-contact area of the sled’s 121-inch-long track is boosted by 43 percent versus a conventional sled, which translates into improved power transfer, control and fuel economy.

Testing a Bombardier Ski-Doo REV XP snowmobile outfitted with RAD, Watling recorded a 10 percent increase in top snow speed over a stock model—to about 112 mph—and a whopping 72 percent boost in fuel economy: from 10 mpg to 17.2. And because of the natural torque reaction provided by the rear drive, as speeds increase, the sled’s ground pressure shifts to the rear of the track. That improves handling and control, in much the same way a racecar acts when cornering at speed. Hit the brakes, and that same torque reaction shifts the ground pressure back to mid-track, eliminating the fishtailing that plagues conventional snowmobiles and enabling the sled to stop in two thirds the distance of front-drive models—something especially personal for Watling, who lost three high-school friends to snowmobile accidents. 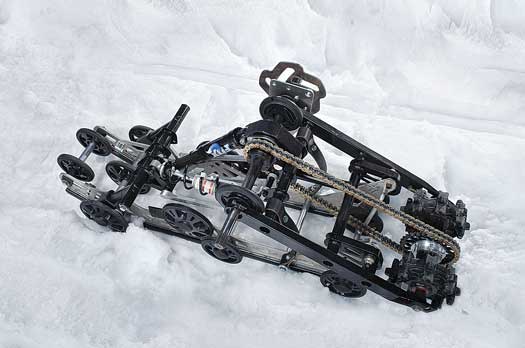 The Rear Axle Drive’s unique design maintains the tension of the snowmobile’s track even when the terrain gets rough.

American Snowmobiler magazine senior editor Mark Boncher came away from a field test impressed. “I test up to 10 snowmobiles a year,” he says. “It brakes better than any recent models I have been on, accelerates extremely well, and corners under power better than any other vehicle we have in the demo fleet.”

Watling is shopping his RAD Technology to the big four snowmobile manufacturers in the hopes that it will be incorporated into production trail-sled designs. In the meantime, he’s also been commissioned by a number of racers to retrofit their sleds with RAD. “It would be really great to see this go into production, after the thousands of hours I’ve spent and tens of thousands of dollars,” he says, and pauses. “But I’d be doing it anyway.”

See the rest of our Invention Award winners here